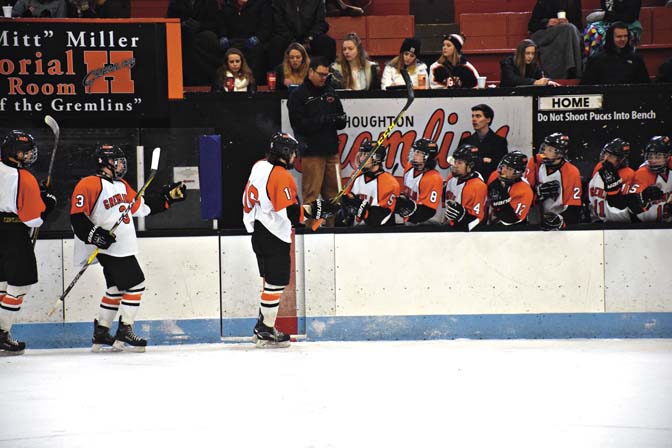 Daver Karnosky/Daily Mining Gazette Houghton celebrates a goal by then-captain Dawson McKay during a game against Kingsford at the Dee Stadium.

HOUGHTON — The Houghton Gremlins hockey team had, by most accounts, a successful 2017-18 season despite not getting past Calumet and Hancock in the end. However, despite losing their starting goaltender and their captain to graduation, the Gremlins are ready to hit the ice quickly with a experienced roster that is willing to work through their tough schedule this season.

“I think the returning players are pretty fired up,” said Gremlins coach Corey Markham. “(They are) ready for the season to start, building off of their enthusiasm (and) just running good practices. (They are) getting fired up as the season getting close here.

“We’re really relying on the returning players to have that enthusiasm to have another strong season.”

Markham feels that his group is strong, thanks, in part, to their “lunch-bucket” mentality.

“I feel that we’re going to be a hard-working team,” said Markham. “In my book, that’s always going to No. 1. (We) stress the work ethic (to keep the) complete level extremely high. I think if we do that, if we compete and work to out highest ability, that we’ll be very competitive with every team.”

Markham has been leading hockey teams for 20 seasons and has some big goals to get his team in shape for the season ahead.

“The biggest goal is that (we) just keep getting better,” said Markham. “The team (has) a long four-month season. (We) really need to keep improving to be (at our) best at the end of the year. Right now, we’re just trying to figure out exactly what we have and where we’re going to be starting at and from there we’re working on getting better every day.

“We have as tough a schedule as we’ve ever had here at Houghton, with the top teams that are coming up from downstate and then all the U.P. teams are all very strong. If our kids play to their ability, then we’ll be competitive (with) every team that we play.”

A total of six forwards will be returning this season on offense. Defense will be more of a mixed group with three returning players and three new faces.

One player who will likely see time in both the offense and defense is senior Brendan Erickson. Having taken on the challenge of playing defense as a sophomore, Erickson has developed quietly into a top-pairing player for Markham’s team.

“Brendan Erickson (has) played defense for (over) the last year for us, but (he) was a forward in the past,” said Markham. “(We also) have six other returning forwards.”

Erickson joins an experienced group of forwards who include seniors P.J. Donnelly, Brad Gauthier and Seth Francois, junior Nico Rajala and sophomore Nathan Erva, who made a big splash in limited time as a freshman.

On the back end, the Gremlins will lean heavily on Erickson and senior Kevin Bostwick. Senior Justin Norkol and junior Ty Halonen should also help shoulder the load.

Goaltending duties will be taken over by sophomore Jimmy Pietila after the loss of Will Stier. He will share time with sophomore Matthew Ryynanen, who had a strong 14U season last year.

“Jimmy Pietila was a freshman last year and played about half of our games, so he got a lot exposure and experience in his first year,” said Markham. “Mathew Ryynanen (has) also joined the team so we’ll have two sophomore goaltenders.”

Many of the players that made the team this year have been skating on what the Gremlins like to call their “taxi squad,” so they are comfortable with how the team functions before they officially take the ice for the orange and black.

“The kids that made the team this year practiced with us last year,” said Markham “They just practiced with us every day, (but weren’t) on the team. They know how things are run and what I expect, so the transition there isn’t very big.

“It is nice in that aspect. There’s no feeling-out period on the new guys (who have) been there and done it, so that should help us early on.”

The Gremlins open with Marquette on the road next Tuesday before coming home to face Hancock, Central and Hartland. Stevenson, Rochester United and Utica come to town in early December before the Gremlins face off for the first time with Calumet at Dee Stadium.

They will face the Copper Kings again in the opener of the MacInnes Classic and will also host Orchard Lake St. Marys and Novi in January.

The Gremlins will close out the regular season on the road against Hancock and Calumet before the Regional Tournament in February.