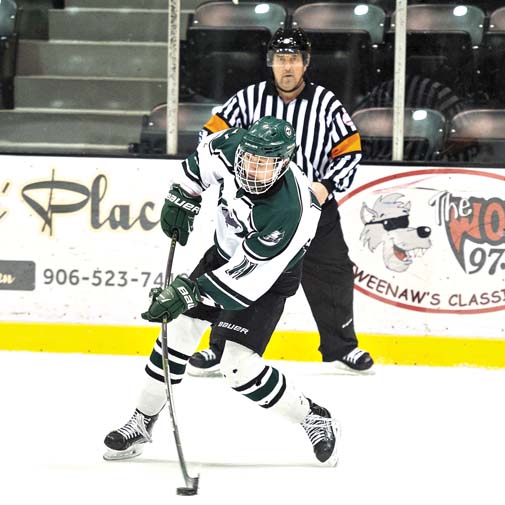 HOUGHTON — After playing a tightly-contested game on the road with the Kingsford Flivvers Monday, the Jeffers Jets had a chance to avenge their 4-3 loss on Thursday at the MacInnes Student Ice Arena. After a strong start for the Jets, the Flivvers jumped all over them in a four-minute stretch in the first period and never looked back, winning 5-2.

A hat trick from Reece Fortner helped the Flivvers’ cause.

“He’s been battling all year and it is nice to see him get rewarded with some goals tonight,” said Flivvers coach Greg Wadge. “That was a pretty new line and I thought they played well.”

For the first eight minutes of the contest, the two teams looked like they were in for a fairly similar game to Monday’s, except without with intense physical play. The Flivvers were playing their fourth game in six nights and Jeffers, for eight minutes, seemed to have them right where they wanted them.

That all changed in a four-minute stretch that started with a goal for the Flivvers’ Jackson Andrews that proved to be the turning point in the hockey game.

“You play a high-caliber, awesome game in Kingsford and you come home, to your home sheet of ice, and you lay an egg,” said Jets coach Patrick Nettell. “To come here and perform like this, I am very disappointed.”

With pressure in the offensive zone, Andrews found himself some open ice on the left side of the slot. Captain Eamonn Weed found him with a pass and Andrews wasted no time burying a quick shot at 9:16.

Reece Fortner extended the lead to 2-0 just 37 seconds later when he found a soft spot in front of the Jeffers’ goal. His younger brother, Hunter, made a smart pass out and Reece beat the Jets’ Evan Pietila with the shot.

From there, the Flivvers continued to push their way through the remainder of the period, getting a point blank scoring chance from Reece Fortner on a 2-on-1 and other good looks as the Jets struggled defensively.

The hard work eventually paid off for Kingsford when Weed found open ice along the left boards. He skated the length of the rink before cutting into the slot and wiring a wrist shot over Pietila’s right shoulder at 13:04.

“It wasn’t on Evan,” said Nettell. “The team was letting it be a shooting brigade on our goalies. Evan didn’t stand a chance.”

The Flivvers opened up a 4-0 lead less than two minutes into the middle frame when Reece Fortner struck with a quick shot on the power play off a feed from Brennan Phillips at 1:56.

Fortner added his hat trick tally as an insurance marker 7:11 into the third period as his shot got through traffic to beat Jets goaltender Noah Nettell.

The goal could not have come at a better time for the Flivvers, who needed some insurance to hold off the pressing Jets.

“They always say that a two-goal lead in hockey is the worst,” said Wadge. “It was good to get that third one and settle the guys down a little bit.”

The Jets finally broke through shortly after as junior David Storm found the net just two seconds later. Storm then factored into another Jets goal less than a minute later as he set up assistant captain Matthew Halonen with speed. Halonen drove to the net and beat Kingsford’s Trevor Anderson with a quick deke to his forehand at 2:54.

Both teams had good looks after the Jets’ second goal, but no one broke through again until Reese Fortner picked up his third goal.

With the loss, the Jets need to win on Saturday in Escanaba to avoid heading into a matchup Tuesday against the Houghton Gremlins in the opening game of the Region 17 Tournament on a three-game losing streak.

The Flivvers are off until Tuesday, when they face Marquette.