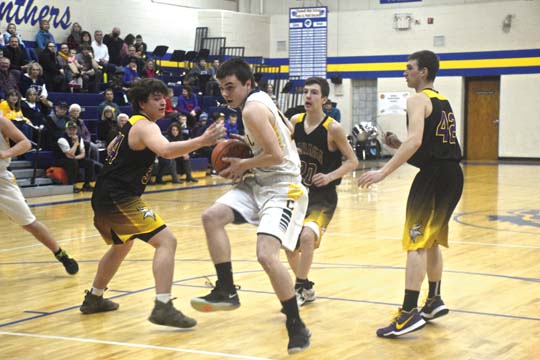 DOLLAR BAY– With one night left in the boys basketball regular season, one small game in the Dollar Bay-Tamarack City Gym has some big implications. The hot Blue Bolts come into Friday night’s affair with a record of 16-3. The visiting Chassell Panthers come in nearly as good at 15-4.

The game could help determine who wins the Copper Country Conference.

Each team is coming into Friday’s matchup with two conference losses each and one divisional loss each.

The Bessemer Speedboys currently lead the conference with one conference loss and will play Ontongan on Friday. Both Chassell and Dollar Bay will be looking for the win in the hopes that the Gladiators can do the same against the Speedboys.

In their earlier meeting this season, Chassell beat Dollar Bay in early December, 51-42, but with the change of scenery, it could be anyone’s game before heading into the postseason with both teams feeling confident with where they are at this point in the season.

“There’s a lot of things at play which makes for an exciting finish. Having the two best teams play at the end of the year to decide the division, that’s what you want and I think it should be a fun game from a fan perspective.”

Kentala feels that the Blue Bolts are in the process of peaking at just the right moment.

“We played them in December,” said Soumis. “It’s in Dollar Bay. It’s always a tougher game in Dollar Bay’s gym because it’s (their) home court and they know how to use that home court advantage.”

Soumis likes how his team has developed over the course of the year.

“I feel (like) we’ve been playing a lot better, (making) a iot less turnovers, making better decisions with the ball,” he said. “We’re at a good spot.”

Chassell will face Lake Linden in the first game of the tournament, whom they hold a 1-1 record with, losing in their season opener, 70-52 and having avenged the loss in mid-January, 51-49.

“It’s always good to end with a positive going into the tournament,” said Soumis. “It will be a good game. We’ve got a good bench and (they) will play a big part in our game. We focus on teamwork defensively and offensively. We’ve all got to work together. I think it’s going to be a tough game.”

Both teams want to use this matchup to measure where their teams are at as they come up on the district tournament both feeling as though they have something to prove and need to make some adjustments before they hit the floor on Friday night.

Kentala wants his players to respect the Panthers, who tend to play an uptempo style that makes life difficult for opposing squads.

“It’s important because it’s big Copper Country Conference game for the division and I think Chassell is a team I think hasn’t gotten enough respect either,” Kentala said. “It’ll be a fun measuring stick for both of us heading into the tournament.”

Soumis wants his team to keep its focus and composure.

“(We) just (want to) stay on our game,” said Soumis. “We’ve got to cut our turnovers down and stuff like that but, overall, I think both teams will be pumped up. I think (they have) a never die attitude. They never give up (and) play hard right to the end, no matter what the score is.”

Kentala feels that his team, that lost several pieces from last season’s district and regional champion, has come a long way from their relatively slow start to the season.

“I think youth and inexperience were two things that we had to overcome,” he said. “Our rotations are small, so conditioning has been an issue and general continuity and learning how to play together and do the right things, particularly on the defensive side of the ball.

“Our guys like to shoot (and) they’re very good at that, but it’s getting them to commit to defense that has been our biggest challenge.”

Soumis feels that his team has grown quite a bit over the course of the season. He has a theory as to how that has happened.

“I’m hoping it’s some of the coaching,” said Soumis. “I always feel as a player you’ve got to have it inside your heart too for what you want. If you want it bad enough, you try that much harder and I think they have that inside of them”

Soumis likes the team-first mentality the Panthers have developed over the course of the season.

“They work the ball (and) are unselfish players,” said Soumis. “They’re a team and I think that’s the biggest difference. That’s where I’m proud of them because they work together and they never give up.”

Smaller schools can sometimes go unnoticed when it comes to the big picture, but Kentala sees this game as an opportunity for Dollar Bay to show they are a big time contender come playoff time.

“The last few years, the bar has been set pretty high,” he said. “The last few seasons have been very good and our guys have risen to the challenge. What people remember and want to see is the tournament and I think it’s going to be good districts (with) good teams in our conference.”

“I think the Copper Country Conference and Porcupine Conference doesn’t get recognized enough,” he said. “I think we’re seen as a lower division. We’ve got a chip on our shoulder and we want to prove some people wrong.”