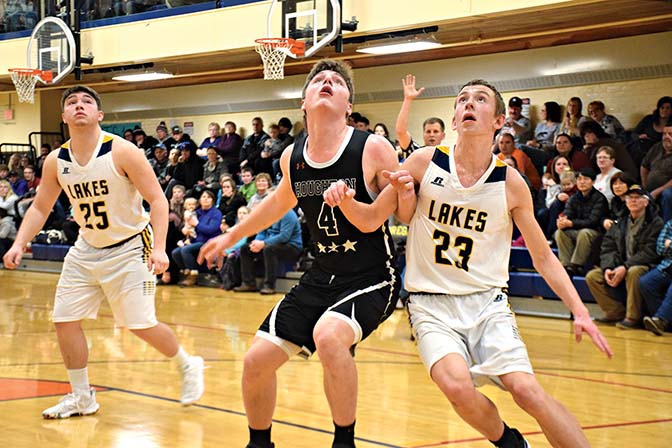 Both players finished their third seasons in Black and Gold by combining for 73 percent of Houghton’s points per night, on average. Head coach Jared Lawson was proud of all the duo accomplished together.

“You can’t ask for much more than that,” said Lawson of seeing both players honored. “It was just amazing to coach those two guys the last three years together. It was kind of a culmination this year with the way they were just feeding off of each other.

“It was amazing to see, this year, games where one would be going off, and then they would plateau and then the other one would start picking it up. They really did a fantastic job of playing off of each other’s strengths. As a coach, it was a blessing to coach those two guys.”

What stood out to Lawson was the fact that both players could create offense.

Sirard and Butvilas, over the course of the last three seasons, have actually grown in opposite directions. Butvilas drove to the basket heavily in his earlier seasons, but as a senior, he grew more confident in developing his mid-range game. Sirard, on the other hand, played a strong outside game as a freshman, but this season, he figured out how to use his 6-foot-5 frame to drive the ball to the basket.

Lawson gushed talking about how much both players grew over the course of the season.

“I think that was a testament to how time those two players put in,” Lawson said.

Sirard led the Gremlins in scoring, averaging 21.75 points per night with 10.42 rebounds. He also found other ways to contribute, with 2.2 assists, 1.1 steals, and just over two blocks per night.

He also was 75 percent from the free throw line, something that is not always easy for a taller player.

During the season, Sirard also broke the 1,000-point plateau. One of the things that made his game special, in Lawson’s opinion, was the fact that his coach had complete confidence in his game, no matter where he got the ball.

“I think Brad, as someone who was coming up through middle school and then as a freshman, he was someone we knew had the skill set,” Lawson said. “For me, as a coach, it was important to give him a 100 percent confidence boost from his freshman year on and now he and George could play like James Harding, when you get down the floor and you see a shot, take it.”

Butvilas, as a senior, had to develop into a leader, both on the floor and on the bench. Lawson felt that that is exactly what Butvilas was able to do.

“He really stepped into the leadership role,” said Lawson. “That’s something that people do not necessarily see in practice or when we are holding a little kids’ camp. Everything that comes with being a senior and a leader on the team was definitely present in George.”

Averaging 19.45 points per game and 5.6 rebounds, Butvilas drove the offense with his newly-developed mid-range game. Lawson felt that, but the end of the season, he was as effective as any player the Gremlins saw all season.

“I would argue that his mid-range game is as good as anyone’s in the U.P. in terms of being able to hit that shot from inside the arc,” Lawson said. “His game, from last year to this year, the leap he took….that was good to see for him.”

Butvilas is moving on to college basketball, and Lawson feels that he has developed a complete package with his mid-range game and his leadership, which is why the senior will get the opportunity to continue to play competitively in the NCAA.

Despite losing Butvilas to graduation, Lawson is excited to see how much Sirard learned going into his own senior year.

“Watching George for the last couple of years develop into a leader off the floor, and on the floor, was really important for him (Sirard),” Lawson said. “He’s seen that, from his freshman year on. He’s seen if a leader doesn’t do things the right way, and then when the leader does things the correct way, the way George did.

“It’s going to be a very exciting season to see Brad develop as a senior. I think that if his post game continues to develop, the sky’s the limit for him at the Division 2 level. He’s clearly show he can play there. I’ve always said he’s a great player on the court, but he’s also a great person to have representing your program off the court.”