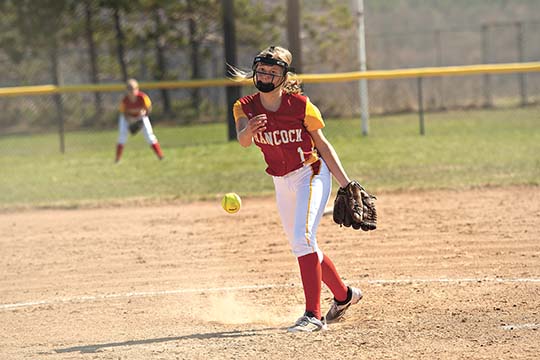 David Archambeau/Daily Mining Gazette Hancock’s Kaydence Kilpela delivers a pitch during the first game of a doubleheader against Jeffers Monday at the Gordy Schaaf Field at the Hancock Driving Park.

HANCOCK — The Hancock Bulldogs improved their season record to 7-4 with a doubleheader sweep of the Jeffers Jets Monday afternoon.

The Bulldogs rolled out the bats in recording 15-6 and 15-0 nonconference victories at Gordy Schaaf Field at the Hancock Driving Park.

“I thought we played pretty well for the most part,” Bulldogs’ coach Randy Heinonen said. “We weren’t really sharp on defense all the time, but we made the plays when we had to.”

The eventual winners scored two runs apiece in the first three innings, but the Jets also tallied two runs in each of the first two innings and one in the third to trail just 6-5 after four frames.

‘I liked the fact that we stayed close for four innings in the opener,” Jeffers manager Stephanie Sterbernz said. “In our last game against L’Anse, we fell behind early by a lot …. and never got back into the game.”

Hancock slammed the door shut with seven runs in the fifth for a 14-5 margin.

Kaydence Kilpela was the winning pitcher, striking out ten batters.

In the second game, which required just three innings, Hancock started off strong.

Abby Brooks led the assault for the Crimson and Gold with a homer and a double.

But Emma Almquist went 3-for-3 and Delaney Henonen had a single, double and triple in just missing the cycle.

Hancock stays home for a doubleheader against Gwinn today. They will also meet rival Houghton on the road Thursday.

“The weather has really messed up the schedule,” Henonen noted. “We’ll all be playing a lot of ball the next two weeks.”

Jeffers also plays a twinbill versus Ontonagon today, and will go to Lake Linden-Hubbell on Wednesday.

Sterbenz, in her first season as Jets’ manager, believes the extra games will help her very young team.

“We are very young and we can use all the game experience we can get,” she said.