Fastpitch opens with a split doubleheader 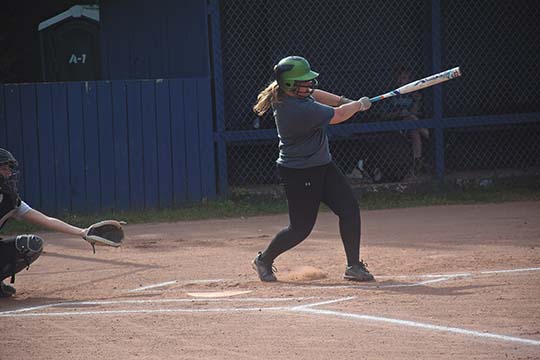 LAKE LINDEN — Uncertainty and excitement rings high before the start of any season. The Copper Country Women’s Fastpitch Softball League teams Superior National Bank and Northern Michigan Landbrokers kicked off their season with a doubleheader at the Boneyard in Lake Linden. The two squads split the games, 11-4 in favor of SNB in the opener and 16-5 in favor of Northern Michigan in the nightcap.

“I was definitely happy with our effort,” said SNB player-manager Rosalie Anderson. “We have a bunch of new girls (who) joined our team this year. It took a little getting used to each other. You could see (some) errors, (as you would) with any start to the season, but I was happy that everybody was able to get the bats going and we were able to pull off a win.”

Janie Berg and Celia Peterson got the bats rolling for SNB with three runs each in the contest. Berg started with a single to lead the game off on a high note for the visitors. Peterson followed two batters later with a walk. Both later scored. Jonna Berg singled and later scored as well as SNB took the early 3-0 lead.

“I noticed that everyone throughout the game hit the ball well,” said Anderson. “Celia (Peterson) hit the ball and Johnna (Berg) had a few hard shots so that was for sure nice to see.

“It definitely gave the girls a breath of fresh air, especially when they haven’t been playing all season (as an opportunity to) relax a little bit and just have fun.”

Northern Michigan got one back in the bottom of the first as Ally Ronis doubled and later stole third before scoring the only run of the inning.

“The first inning, they had their bats going,” said Northern Michigan Landbrokers player-manager Melissa Baker. “It took our bats a little bit to get going. (We) made a little bit of a comeback, but it wasn’t quite enough in the end.”

Both Bergs rolled through the second inning to help SNB put up another four runs. Janie Berg started things with a single. Vera Peterson walked. Celia Peterson and. Jonna Berg both doubled. All four scored.

“We definitely need to work on some hitting and our fielding,” said Baker. “We’ll progressively get better as the season goes on.”

While Ronis went in from second base early in the bottom of the first, Northern Michigan did not see home plate again until the bottom of the fourth inning when Mackenzie Ekdahl got on base and later scored on a hit by Isabelle Cleary.

In the fifth, Northern Michigan found a way to get on the board again. After Ronis tripled and scored on a Cassidy Becia single, Becia then stole both second and third before later scoring.

Baker was really happy with thee efforts of the top of her lineup.

In the nightcap, Ronis walked to lead off and later scored as part of a eight-run first inning for Northern Michigan. Becia, Baker, Ekdahl, Cleary, Anna Gaffney, Carolyn Parker and Raili Therrian all found home plate in the inning.

SNB answered with three runs in the bottom half of the first only to see Northern Michigan score four more runs in the top of the third.

Jonna Berg manufactured a run in the bottom of the third for SNB by walking and later score on a sacrifice by Molly Anderson, but that was all they could muster in the inning. SNB tacked on one more run in the sixth when Janie Berg singled and later scored on an error.

Ekdahl reached on an error and later scored in the fifth inning for Northern Michigan. They then tacked on three more runs in the seventh to seal the win.