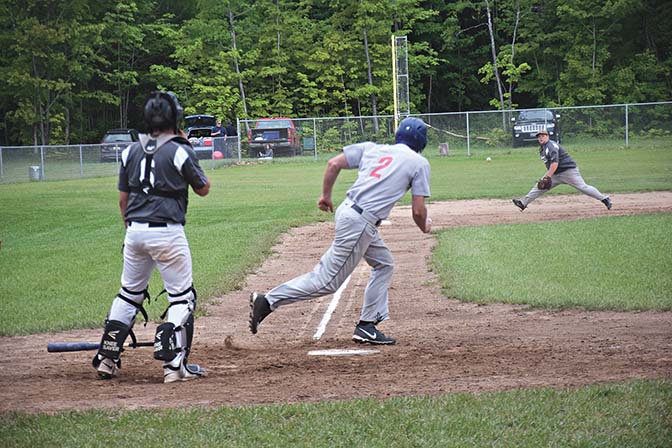 STANTON – Superior National Bank-Stanton moved to 3-0 in Copper Country Twilight League baseball action on Tuesday with a 4-3 come-from-behind win over Dean Kangas-State Farm in the bottom of the seventh inning.

“This was a baseball game,” said Stanton’s player-manager Daron Durocher. “We had to put on a little strategy and it made a difference. A missed play here or there and the game could have gone the other way.

The team from Stanton took the lead with a run in the first inning. Shortstop Justin Kirby started things off with a base hit through the right side of the infield. He advanced on a bunt by Durocher and came home on an errant throw.

In the top of the third inning, State Farm came back to take a 2-1 lead. Devin Kero began with a base hit up the middle. Two batters later, Brady Turner brought him in with an RBI single to tie the game. Then, with two outs, first baseman Brian Juopperi made it to first on an error by SNB-Stanton’s second baseman and Turner was able to score and make it a 2-1 ballgame in their favor.

On the mound for State Farm was right-hander Dave Wesa. Al Nettell was the starter for Superior Bank and was relieved by Eli Luoma in the fifth inning.

“I thought both pitchers did well,” said Durocher “They threw strikes.

In the bottom of the fifth, Stanton tied things up at two as Al Nettell walked and came in on a Justin Kirby line drive up the middle. Luckily, Nettell scored before State Farm pulled a double play by getting both Kevin Bostwick and Kirby caught in a run down.

The game took a turn in Dean Kangas’s favor just a half inning later as Juopperi smacked a double to right center and was brought in by a hard hit ball down the left field line by their catcher Scott Pietila.

With the game at 3-2 in favor of State Farm, SNB-Stanton could not get their bats going again nearly the last minute until the bottom of the seventh.

First baseman Josh Koskela started the rally with a base hit. Durocher followed with a fielder’s choice, but Koskela was forced out at second. Second baseman Trent Keteri then squeezed out an infield hit. Carter Nettell singled and brought in Durocher to tie the game at three.

Bostwick then was hit by a pitch which loaded the bases for Kirby. He smacked a line drive over the middle for his second RBI of the game which was also the winner.

“It was a good game that could have gone either way,” said State Farm’s player-manager Juopperi. “That’s baseball.”

These two teams will meet again on Thursday at 6:30 p.m. at Hancock’s Driving Park.