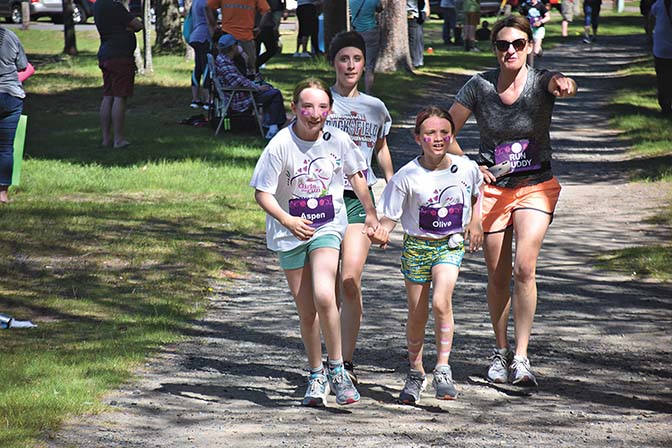 Eddie O’Neill/Daily Mining Gazette Aspen Stoll-Pietila (left) and Olive Schmidt (right) along with their run buddies navigate their way to the finish line on Saturday at the GIrls on the Run Confidence 5k in Marquette.

e girls of the Houghton Hotstepping Grunners laced up their running shoes in early April, several feet of snow was still frozen to the ground and temperatures hovered in the mid 40s. Fast forward two months and snow and chilly temperatures were the last thing on the mind of these third-through-fifth grade girls as they lined up at the starting line for the second annual Girls on the Run Confidence 5K run at Presque Isle Park in Marquette this past Saturday. Temperatures were in the low 70’s without a cloud in sight.

What a difference eight weeks makes in more ways than one.

“These girls were awesome,” said Rebekah Schmidt, first-grade teacher at Houghton Elementary School and head coach of the school’s new Girls on the Run club. “In the beginning, we had a lot of timid girls who were trying to figure out how they were going to run 3.1 miles, but they learned that it was so much more than just running by the end.”

Girls on the Run began more that 20 years ago as an after school program for pre-teens in Charlotte, North Carolina. The program’s mission is to inspire girls in third to fifth grade to be joyful, healthy and confident using a fun curriculum that integrates fitness and running. Today, the program has hundreds of councils and is present in all 50 states.

In the Upper Peninsula, there are 12 teams. Five of them competed in Saturday’s season-ending run. Along with Houghton, Ispheming and three teams from the Marquette area were represented on the race course.

“We are helping these pre-teens discover their limitless potential,” said Cindy Merkel, executive director and founder of Girls on the Run in the U.P.

She began the program in the U.P. ten years ago.

“It is telling girls that they are okay just they way they are,” she said. “They do not need to become super models or super athletes to be recognized. What is important is who they are on the inside.”

Schmidt said she first learned of the program through the Hancock School District and thought it would be a good to bring it across the canal.

Her group of around 20 girls met twice a week after school for an hour and a half. Through group activities, discussions and sharing, the girls learned that they are not alone in the day-to-day struggles. Running a 5K gave the girls a tangible goal to accomplish as well emphasizing fitness and the importance of good health habits.

Schmidt and her team of volunteer coaches noted that the results have gone far beyond strong running times.

“In April, we started in the gym running laps and setting goals for themselves,” said Schmidt. “The girls were eager to see if they beat their goals each week. We also worked on character building and had self-esteem exercises. The girls were encouraged to be kind and uplifting to one another by running with a different person each week for instance. In one way or another, all of them came out of their shells. The girls have grown a lot.”

The group even had a community service project. Last week, they spent time cleaning up their school yard after the school’s field day.

“We wanted to show that this is not just about running, but it’s about giving back to the community,” Schmidt said.

When running circles in the small gym became mundane, the girls broke all the rules and ran in the school’s hallways.

“For kids who are told their whole life not to run in the halls, it was a lot of fun and a motivating factor to get better,” Schmidt said.

Once the snow melted, the girls finally made it outside and onto the school’s parking lot and sidewalks.

Friederike Gast had only the highest praises for the program as her fifth-grade daughter Lilli crossed the finish line on Saturday and had a medal placed around her neck.

“Lilli had never done anything like this,” said Gast. “She loved the camaraderie of the other girls. Her self esteem has soared. The coaches have been such caring and dedicated individuals.”