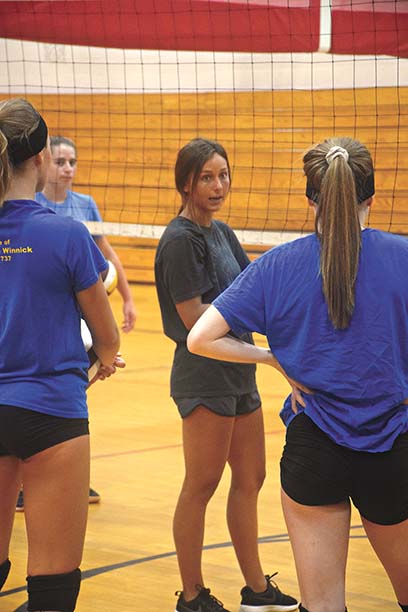 HANCOCK – The Hancock Bulldogs have a new leader on the volleyball court. Elle Heinonen, a recent volleyball standout at Michigan Tech University, is wrapping up her second week as head coach of the varsity team and enjoying every minute of it. She replaces Sarah Geiger who led the team for five years.

While Heinonen knows plenty about playing the game of volleyball, this will be her first time coaching the sport.

“While I’ve done plenty of (volleyball) camps and clinics before, I have never coached before,” she said. “I knew it was a big step, and I was a little nervous, but the girls here have made it easy for me. I love coming to practice and sharing my experiences with them.

“It’s been a great opportunity.”

She added that her only real struggle so far has been the administrative side of the job.

“I’m still learning what needs to be done in terms of taking care of the paperwork and the forms and all the details that go along with coaching a high school team,” she said with a smile.

Heinonen is no stranger to the game of volleyball and the local community. The Delano, Minnesota, native said she fell in love with the sport in middle school. She played club volleyball for Kokoro (based in the St. Paul area) all through high school as well as for Delano High School, where she was named First Team All-Conference as a senior.

She committed to play volleyball at Michigan Tech University after graduating in 2014.

“My dad went to Tech and my brother played hockey here,” she said. “I knew I wanted to play volleyball here.”

In her four years as a Husky, she set an MTU record for most digs in a season with 571 and most digs per set at 5.05. As well, she was a regular on the GLIAC (Great Lakes Intercollegiate Athletic Conference) All-Academic Excellence team. She graduated in 2018 with a bachelor’s in exercise science. She stayed on as a graduate assistant with the volleyball program at Tech in 2018 while working on a master’s degree in physical therapy.

“I loved my Michigan Tech volleyball experience,” she said. “It was great playing for coach (Matt) Jennings and my teammates. Every year, we got better. Now that I am on the coaching side of things I have even more respect for coach (Jennings) and his teaching methods.”

Heinonen added that she is even using some of Jennings’ drills in her practices.

“I am also drawing a lot from my high school days as well because that is what I am working with here,” she said. “I am trying to keep it fun and exciting while teaching them the fundamentals of the game.”

Her girls have been like sponges absorbing their new coach’s knowledge. Having been with her team for not much more than a week, Heinonen can already tell that her squad of 11 juniors and seniors all have strong, unique qualities on and off the court.

Heinonen said that she has been taking things slow at practices as she has been focusing on the basics of the game. She is still feeling them out as to where they will be on the court this season just as her players are getting used to her coaching style.

“It is strange,” she said, “because I am coming in with a clean slate. I have never seen one of these girls play before, but already I can see that are talented and hard working, and they want to get better every day, and they are.”

Their hard work will be put to the test on Tuesday as they will open the season against the Chassell Panthers. Heinonen is confident that all will go well.

“We have a good group of girls who want to play volleyball,” she said. “If we continue to work hard, we’ll have a really good season.”