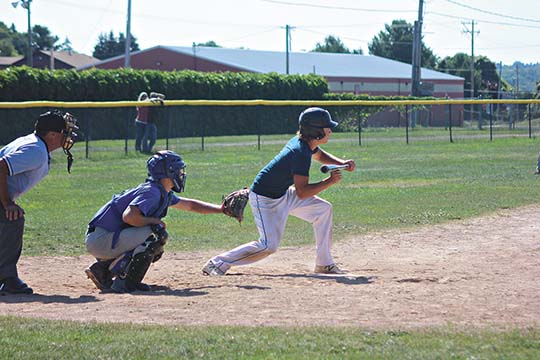 HANCOCK — If there was one thing that characterized the Copper Country Twilight League playoff series between first place REL. Inc.-Mohawk Technology and last-place Garnet Garage, is that REL had a taste for late-inning baseball drama. In Game Two on Thursday, they rallied back from a 6-2 deficit to win 12-8 as they scored their 10 runs over the course of the last two innings.

With that win, they avoided elimination and forced a third game which took place on Saturday at the Hancock Driving Park.

In the deciding contest, and in even more dramatic fashion, REL waited until the had just one inning left before their bats came alive and they were able to squeak out a 5-4 victory against Garnet in the bottom of the seventh inning.

“We waited till the seventh inning, but we got the job done,” said REL’s player-manager Tyler Loukus. “The bats came around when we needed them.”

Down 4-3 with just three outs left, REL’s Grant Johnson stepped up to the plate and laid down a bunt single off of Garnet’s starter Rob Brooks. Next up was Rory Anderson, who punched a base hit through the right side and advanced Johnson to third. Sam Kariniemi then slapped a line drive up the middle, scoring both Johnson and Anderson. The game and the series was over with one swing of the bat. 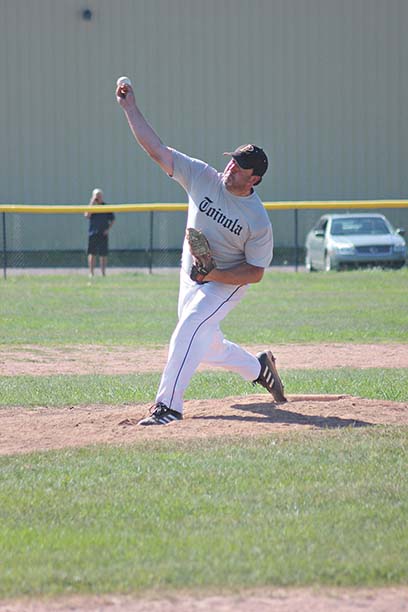 However, as was the case in Game Two, the momentum for the most of the game belonged to Garnet Garage. They posted a number on the scoreboard first as they found home plate in the top of the third inning when centerfielder Eliot Magilessi made it to first on a fielder’s choice. Justin Norkol joined him on the base paths with a walk from REL’s starter Alan Jurmu. Left fielder Will Romano then found a hole through the left side which allowed Magilessi to score. Norkol followed him home thanks to a bloop single to right field from Carter Crouch. Garnet led 2-0 at that point.

They added two more runs an inning later. Back-to-back walks issued by Jurmu put pinch-runner Eli Larson on second and Lucas Kissell on first as Jordan Reynolds came to the plate. The third baseman hit into a fielder’s choice, but an overthrow to first allowed Larson to score. Alex Kissell then brought Lucas Kissell in with a base hit of his own before the inning was over.

Garnet’s four-run lead, however, would be cut to three just minutes later as REL’s Brian Halonen stepped up to bat in the bottom half of the fourth. He launched a fastball over the Driving Park’s left-center fence for a solo home run.

REL kept going in the fifth with a hit and a run scored by Johnson.

In the sixth, they added a third run as Jurmu and Brent Loukus got back-to-back singles. A hard hit ball then back to the pitcher by Tyler Loukus resulted in an errant throw to first and Jurmu scored to set the stage for their REL’s dramatic two-run comeback in the seventh.

With the victory, REL will face Dean Kangas-State Farm in the championship best-of-three series beginning Tuesday at the Driving Park.

Despite the loss, Garnet’s manager Joe Romano was quite pleased with his young team’s inaugural Twilight League season.

“It was a fun season,” he said. “These kids came a long way from when we first started. They played a great game today, and they have nothing to hang their heads about.”