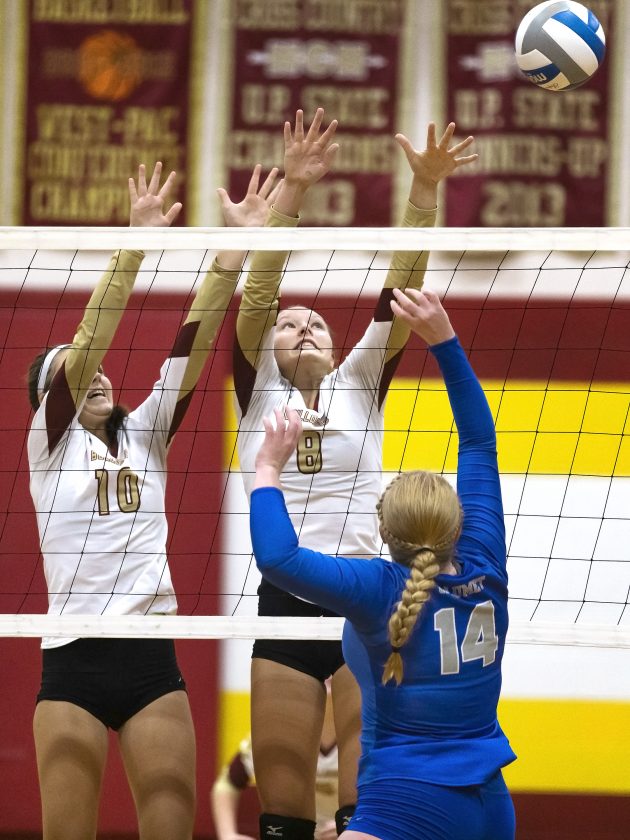 HANCOCK — Calumet took control early and held on for a three-set sweep against Hancock on Tuesday.

“The girls were seeing the floor well tonight. I think at times we were getting some really good swings,” he said. “We just gotta be more consistent overall. It’s just the girls need to stay aggressive. They started to play it safe a little bit. If the set wasn’t perfect they were just pushing it. They need to get a good swing on those.”

The Bulldogs held within five points through the first set before Calumet found rhythm at the end, and outscored Hancock 7-1 for the final points of the 25-15 win.

Calumet repelled Hancock’s emergence in the second set, vying point-for-point. Hancock held within two to three points through the second set, but never reached the next level to hold on to a lead as Calumet won 25-21. But like the Copper Kings have done so far this season, they found a way to stay on top all night.

Hancock battled back in the third set, turning a 20-8 deficit into a 22-15 game. Calumet finished out the set 25-15 to complete the sweep.

“One of the things we’ve been talking about all season is defending their home court,” Heinonen said. “They took the loss tonight, but I think they still fought and defended our home court and walk all over them. They defended and they played hard and I’m proud of them for that.”

Calumet had 13 aces on the night including seven from Molly Larson and three from Elli Djerf. The Copper Kings also had 30 team kills, including 11 from Djerf and nine from Larson. Cami Johnson led the team with 13 digs.

The Hancock High School gym was stuffy and hot all night, with many in the crowd fanning their faces with the game program.

“You’d think we’d be ready practicing in it, but tonight was hot,” Heinonen said. “It’s pretty warm but I think with all the fans and everything it gets a little hotter. It’s our home gym so we’re used to this environment, so I don’t think that’s what affected us.”

Laho said the heat affected his team, though they found a way to work through it.

“I’m very happy with how we played and how the girls grinded it out. It’s hot in there today,” Laho said. “You could see it — they were feeling it out there. To get out in three is always a good thing.”