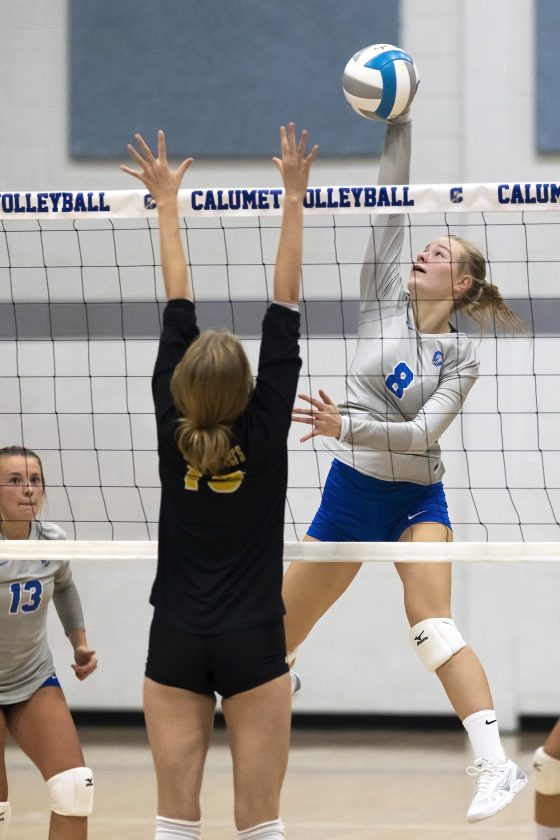 CALUMET — A strong defense and serving night propelled Calumet to a 3-0 West PAC sweep over Iron Mountain on Thursday.

Calumet won by scores of 25-17, 25-8 and 25-14. Despite the Copper Kings winning the night by a convincing 75-31 combined score, the Mountaineers battled the majority of the night and made Calumet earn most points.

“I thought we did a good job keeping them out of system,” Calumet head coach Matt Laho said. “They sent us a lot of free balls and a lot of easy ones that we could convert into good swings. We did a good job of getting points out of those.”

Calumet racked up 14 aces and 35 kills on the night including 15 kills from Molly Larson. Elli Djerf had 12. Cami Johnson had a team-high four aces.

The Copper Kings (2-0) kept Iron Mountain on its heels with well-placed kills.

Mountaineers coach Jeanne Newberry said Calumet played tall and caught her back row in-between with shots towards the back line.

“When they played the ball across, they were hitting my girls in a standing position in the court,” Newberry said. “They knew that ball was in, but it came so quick that they weren’t back far enough for this team. This is a quick team. Defensively, you have to play them a little deeper than other teams. We tried to cut the court off a little short and that’s where a lot of the points were earned, was serve-receive, because we weren’t backed up enough.”

Calumet complimented its offense with tenacious defense, collecting 71 digs, including 28 from Johnson. Gloria Hendrickson had two of the team’s three blocks, with the other by Madison Peterlin.

“Our girls do a great job of reading the floor,” he said. “At first they were at a little bit of a middle-up. Once the girls recognized that, they saw where the holes were and started hitting them.”

Newberry said her young team, with four seniors, is starting to put the pieces together.

“Our defense is coming. I’m working with a libber,” Newberry said. “I haven’t worked with a libero in quite some time over the years. Kalli Balmes is doing a fantastic job in covering and talking to the team. Everyone’s learning this quickness.

“We do have a younger team. I brought up Annslee, she’s only a sophomore. She does a lot of help in the front, giving us strength in the middle and outside hitting. We’re able to do that with Anna (Rittenhouse), Reagan, she does a great job. It’s when the setter gets in position that an outside hitter can go over, and that’s what we have to work on tomorrow.”

Calumet plays in the Ashwaubenon Invite on Saturday in Ashwaubenon, Wisconsin. Iron Mountain plays at the Forest Park Invite in Crystal Falls.