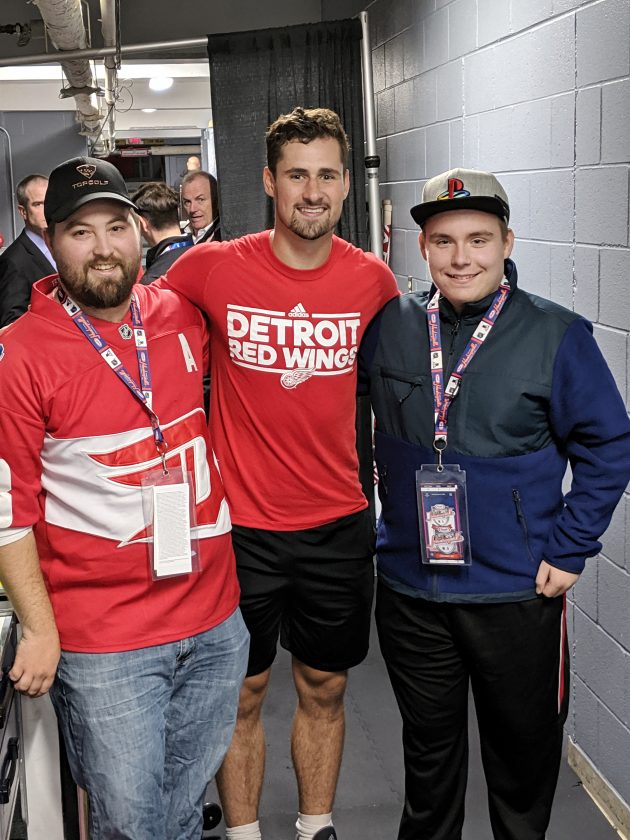 BARAGA — While the traveling circus of teams, personnel, TV camera crews and satellite trucks have long left the Copper Country with the start of the regular season, memories of Kraft Hockeyville USA in Calumet will not soon be forgotten.

Bruce and his dad Ken won two tickets through the ticket lottery to the Kraft Hockeyville game set for September 26. The two ardent Detroit Red Wings fans were all set to enjoy the match-up with the St. Louis Blues when tragedy struck the Tovey household. On September 15, Ken unexpectedly passed away from a massive heart attack.

A few days later, Davidson was contacted by the family and asked if he would take Bruce to the game.

“When I was asked to go with him, I was overwhelmed with emotion and graciously accepted,” Davidson said.

While Tovey was in one of Davidson’s math classes this year, the two did not know each other well.

“I was getting to know him better through an e-sport gaming club I run,” Davidson, 26, said. “Bruce has a love for gaming.”

What makes their friendship even more special is that Davidson had lost both of the his biological parents as well. Tovey did not know that beforehand.

“Neither one of us have both parents and so that has been a good bond for us,” Davidson said. “My dad passed away around five years ago in a car accident, and my mom died when I was three months old. So we have very similar stories and a lot for us to talk about.”

The event organizers at Kraft Hockeyville learned about Tovey’s situation through one of his aunts. The Hockeyville team wasted no time in preparing to make Sept. 26 one to remember for Tovey and Davidson.

“We took the day off from school and headed up to Calumet early,” Davidson said. “We did the red-carpet welcome and watched the Red Wings skate. They were then ushered downstairs to the locker rooms where Tovey got to meet Red Wings head coach Jeff Blashill and star forward Dylan Larkin.

“I thought I was just going to shake hands with the players or get a picture,” Tovey said. “But Blashill came over to me and said he knew about what happened and gave me some encouraging words.

Dylan Larkin did the same, and he even gave he a (hockey) stick which he had just used and signed it in front of me.”

Once game time arrived, the two had seats two rows behind the penalty boxes.

“The best part was seeing the game close up,” Tovey said. “The (Calumet) Colosseum was amazing.”

Davidson agreed that the game was great along with all of the special moments the two shared thanks to Hockeyville.

“It was an awesome day for us, and Bruce was just overwhelmed,” he said. “Everyone was so welcoming.”

In fact, the new best friends are already mapping out a return trip to see a Calumet Wolverines hockey game this season.

“I can see this as the start of a long bond,” Tovey said with a big smile.