Atlantic Mine native to compete in Ironman World Championship 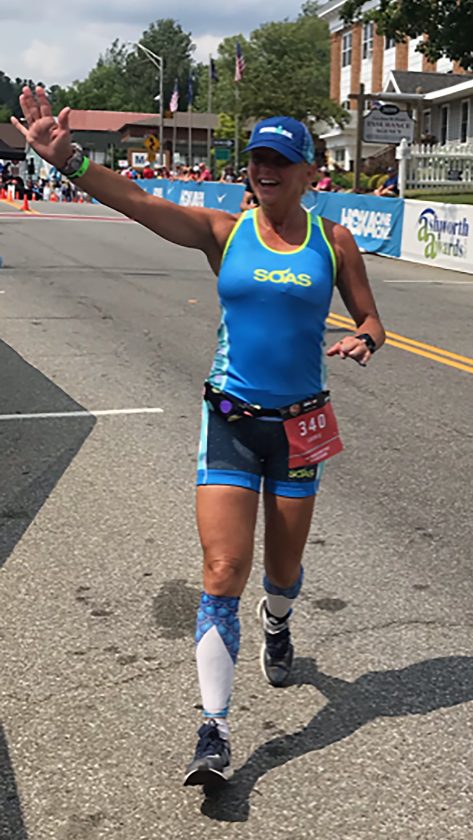 The 53-year-old world-class athlete from Atlantic Mine is more than 4,000 miles away from home and eager for the Ironman World Championships.

“I am all trained out. I’ve done everything I need to do,” she said. “It’s time to get this party started.”

The Ironman World Championships is Saturday in Kona, Hawaii. This best-of-the-best triathlon consists of a 2.4-mile swim, 112-mile bike ride and a 26.2-mile run — all in one day. For most people and even many athletes, that’s a far cry from their idea of a party. However, for Smith, it is a dream come true.

“I am thrilled to be here and given the opportunity to conquer this,” she said. “Not many make it here so I feel pretty blessed.”

The world’s top triathletes descend upon Kona each October. It’s the Super Bowl of the Ironman’s annual global competitions. Smith landed in Kona about 10 days ago. However, her journey to the Aloha State began in earnest more than a decade ago.

“I have always been into fitness,” she said. “I started out as a runner doing marathons and for many years, I’ve been a spin instructor and taught fitness classes around town.”

Smith said she has completed 38 marathons including the Boston Marathon several times. She stumbled upon the world of triathlons around a decade ago after she developed thyroid cancer.

“The doctor told me, I should take a year off from running marathons. But, he didn’t tell me I couldn’t swim or bike,” she said with a smile. “I then found out about the Copperman triathlon (half-mile swim, 22-mile bike and five-mile run) in Copper Harbor. I borrowed a bike, and did it just to finish it and see how I felt. It felt great. I liked the variety of the swim and bike. It breaks up the monotony of the run.”

That led her to her first half-Ironman in 2009.

“When I finished that one, a lady told me I could totally do an (full) Ironman,” she said. “So I did and that was in Madison, Wisconsin. I loved every minute of it.”

Smith was hooked. She signed up again and again competing just to finish each Ironman. Then things got serious.

“After my fourth Ironman, I podiumed without really trying,” she said. “To podium meant that I finished in the top five (out of 100-130) finishers in my age bracket. That got me thinking maybe I could get to Kona.”

To get to Kona and the Ironman World Championships, one has to finish first (in their division) in a sanctioned Ironman triathlon. She achieved that in late July, taking first in the women’s 50-54 division at Ironman Lake Placid, New York. It was her ninth Ironman.

“The key to Lake Placid was a good transition from my bike ride to my run,” she recalled. “I hit my stride in the run right away. I knew I was in first with just a few miles to go and I just kept my pace. When I crossed the finish line, I was so happy. It was something that I was shooting for and I got it.”

Since arriving in Kona, Smith said she has had to adjust to the warmer weather, humidity and strong winds as she has been scouting out the course.

Swimming in salt water (Pacific Ocean) will also be a first for her. She is used to the calm, murky waters of Twin Lakes as her hometown swimming spot.

“The water here is very warm and we have swam with sea turtles, dolphins and the most colorful fish,” she said. “It will be more of a challenge because the water is choppy.”

Her biking and running routines while at home in the Copper Country usually consist of runs and rides to Ontonagon. On Saturday she’ll pass through the “Energy Lab” — a section of the run course that winds through a field of lava, around the 16-mile mark of the run. She heard temperatures there can reach 115 degrees — quite a change from a crisp October morning in the Keweenaw. With all this in mind, she said her goal this weekend in Hawaii is a modest one: just finish the race.

Since she set her heart and mind on Kona years ago, Smith said there hasn’t been a day when she hasn’t done something to reach that goal. That includes running outside all year long, swimming at MTU’s Student Development Center during the frozen months and continuing to teach spinning classes.

“There is no such thing as bad weather, just inappropriate clothing,” she said.

Smith said she is her own best coach. She tried a personal coach for awhile but there were too many scheduling issues. It was too hectic.

“I know what I have to do as I have been doing it for so long,” she said. “I know what my weaknesses are and what I need to work on.”

She works with a nutritionist out of California, who has been with her on-site helping get ready at Kona.

While Smith realizes that a marathon or a triathlon is not for everyone, her motto is to think big and have a dream.