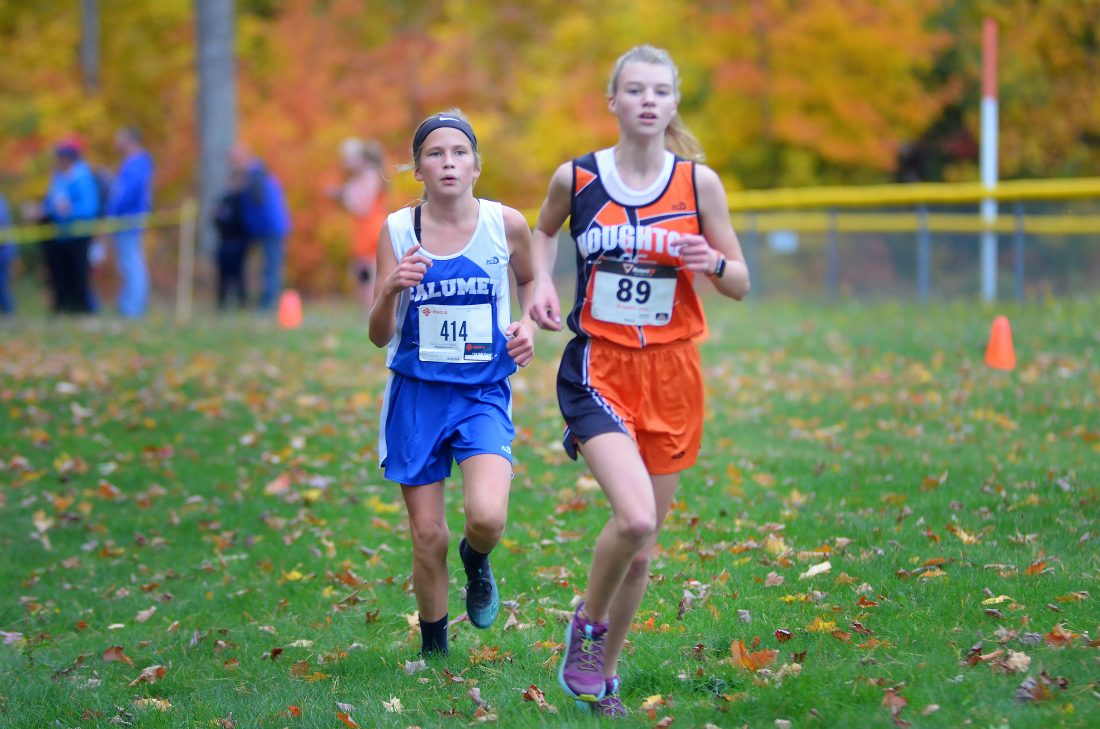 NEGAUNEE — In the second year of the expanded West PAC, there’s been no change at the top when it comes to cross country.

The fifth and final West PAC meet of the season was held at the Negaunee Township Hall on Thursday afternoon, with the Ishpeming boys and Houghton girls claiming the meet. Both teams repeated overall conference championships.

The Ishpeming boys won with 21 points, followed by Houghton with 37, Negaunee 73, Calumet 110 and Westwood 119. Hancock didn’t field a full team.

The Gremlins topped the girls standings with 51 points, followed by Westwood with 69, Hancock 73, Negaunee 100, Ishpeming 117, Calumet 121 and West Iron County 186. Gwinn didn’t get a team score.

“The kids ran really good and they’ve been getting really fast the last couple of weeks,” he said. “We’re looking forward to a good U.P. Finals.”

Broberg battled with Wood to the very end, but it was Wood who had the edge with a time of 16 minutes, 58 seconds to Broberg’s 17:00.

“(Jonah) tightened it up at the end but he tightened it up a little too late,” Pruett said. “He did good, though. Him and Joe are both great runners. The kids are getting faster and this is what you want at this time of the year. Their times are PR’ing (personal records) right now. We’ve got the Mid-Peninsula Conference meet on Monday and then it’s on to U.P. Finals.”

Houghton coach Traci Welch said despite her girls winning the West PAC two years in a row, it still seems like a long time coming.

“It feels great,” she said. “We’ve had a little bit of adversity coming into the last couple of meets. One of our top runners has been very, very sick at the hospital down in Ann Arbor, so we were really pleased that the rest of them could pick up and win it.

Welch’s boys team also put out a strong runner-up finish to the Hematites, led by Wood.

“They’ve been in kind of a battle all year,” she said. “Joe is a phenomenal runner and he’s a very good hill runner, so I was curious to see how he was going to do because it was a bit of a flatter course, but he broke 17 (minutes) and I think he had his best time ever. He had a phenomenal race and is a great runner.”

Houghton and Ishpeming combined for 11 of the top 12 spots in the boys race, the lone exception being Eric Anderson of Negaunee who came home ninth in 18:20.

Behind Wood and Broberg at the top were Ishpeming’s Jordan Longtine, David Liimatta and Silas Broberg to round out the top five. Branden Peterson was the next Gremlins’ finisher in sixth while Joseph King came home seventh for the Hematites.

Evan Labyak and Tucker Rynnanen rounded out the top 10 for Houghton.

Jacob Jestila was the top finisher for the Patriots, finishing 14th overall in 18:56. Calumet’s Anton Kristapovich was 15th in 19:19, while Hancock’s top finisher was Matt Monette in 23rd.

The Gremlins girls claimed three spots in the top 10 to help their case, with Ingrid Seagren and Autumn Eles finishing third and fourth, respectively. Seagren came in at 20:35 while Autumn Eles ran a 21:21.

Elizabeth Williams rounded out the top five as Westwood’s fastest finisher in 21:28, while teammate Tessa Leece was 10th in 22:01.

All-conference awards were also presented following the meet, with Wood and Paupore named Runners of the Year.

Fifteen runners in each race were named to all-conference. Ishpeming and Houghton combined for 12 of the boys’ slots, while Negaunee earned the other three. The girls were a little more spread out, with the Gremlins taking four, Negaunee and Hancock three each, Ishpeming and West Iron two apiece and Calumet one.

The U.P. Finals are Saturday, Oct. 19, at Gentz’s Homestead Golf Course in Chocolay Township outside of Harvey.