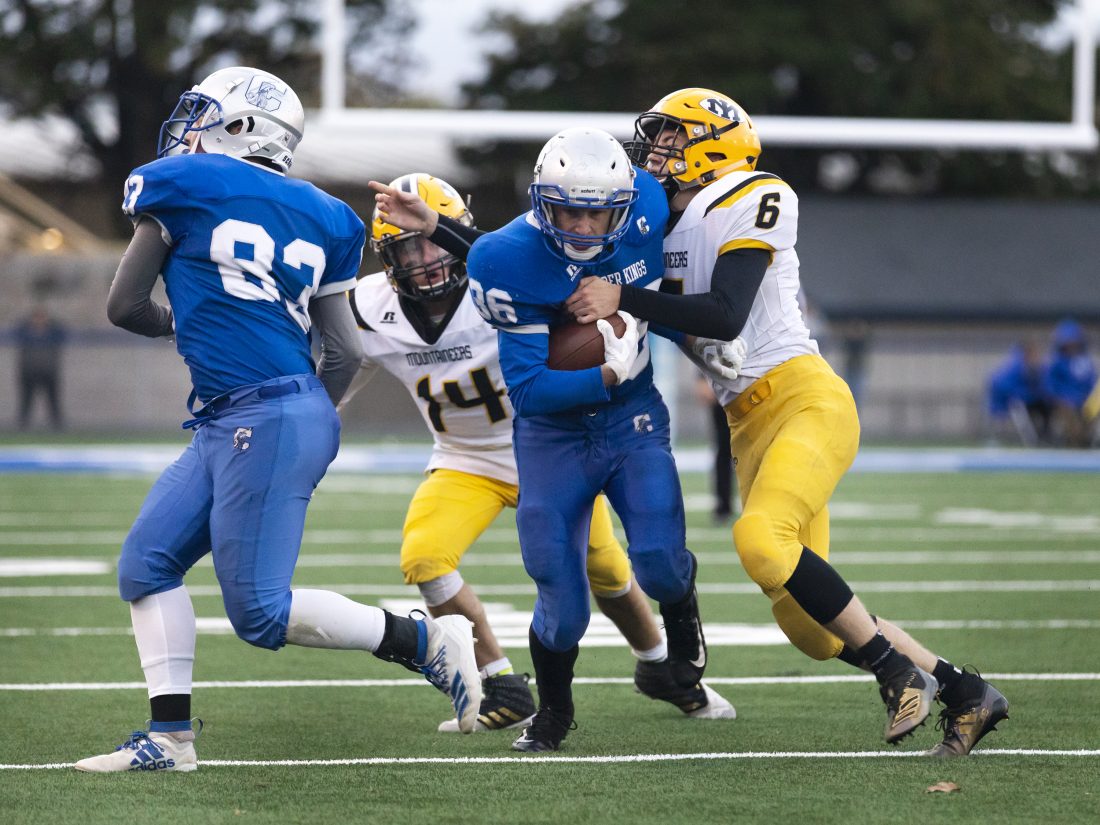 CALUMET — Iron Mountain survived a no-holds-barred West PAC dogfight in a 15-14 win over Calumet at Agassiz Field on Friday.

The Mountaineers (6-0) qualified for their second straight playoff appearance and eighth since 2010.

“We had a real good feeling that it was going to go just like this,” Iron Mountain head coach John Croze said. “It was going to be a four-quarter war. All week we’ve talked about winning the next play to winning the last play. We did that.”

Calumet (5-1) took its first loss of the season squarely on the chin.

Iron Mountain scored in the first quarter on a 1-yard run by senior quarterback Marcus Johnson. The score was set up by a 62-yard burst from running back Caleb Evosevich-Hynes. 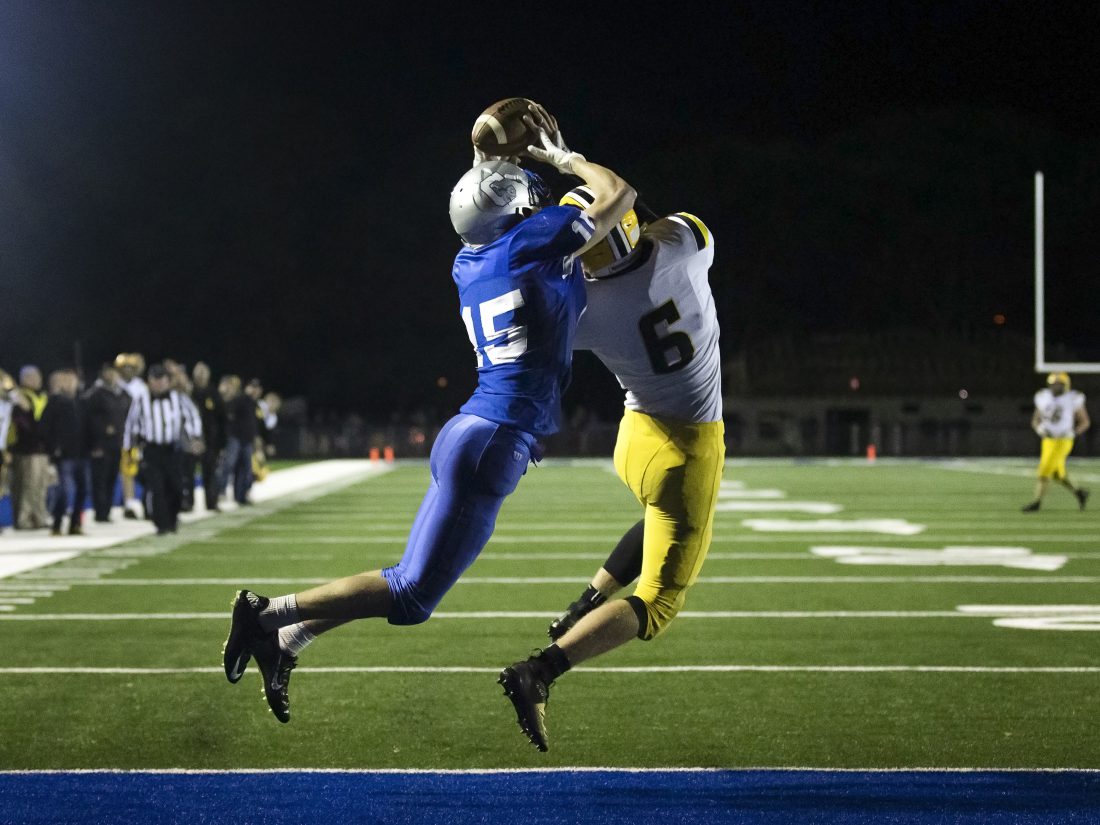 All was quiet until Calumet’s second quarter touchdown on a bullish 5-yard run by Jayden Gariepy.

Iron Mountain took the ball with 5:09 in the third quarter and put together a dominant drive.

The Mountaineers held the ball through the end of the quarter and into the fourth, converting on six third-downs and ultimately scoring on a 2-yard run by Bryce Pietrantonio. Iron Mountain added a two-point conversion on a slant pass to Pietrantonio to put the Mountaineers ahead 15-6. There was 4:54 left in the game.

“Obviously that was a big play in the game to go up nine points in the fourth quarter,” Marttila said. “Credit Calumet, they battled back, made it interesting in the end.”

Croze said the drive was hard to come back from. 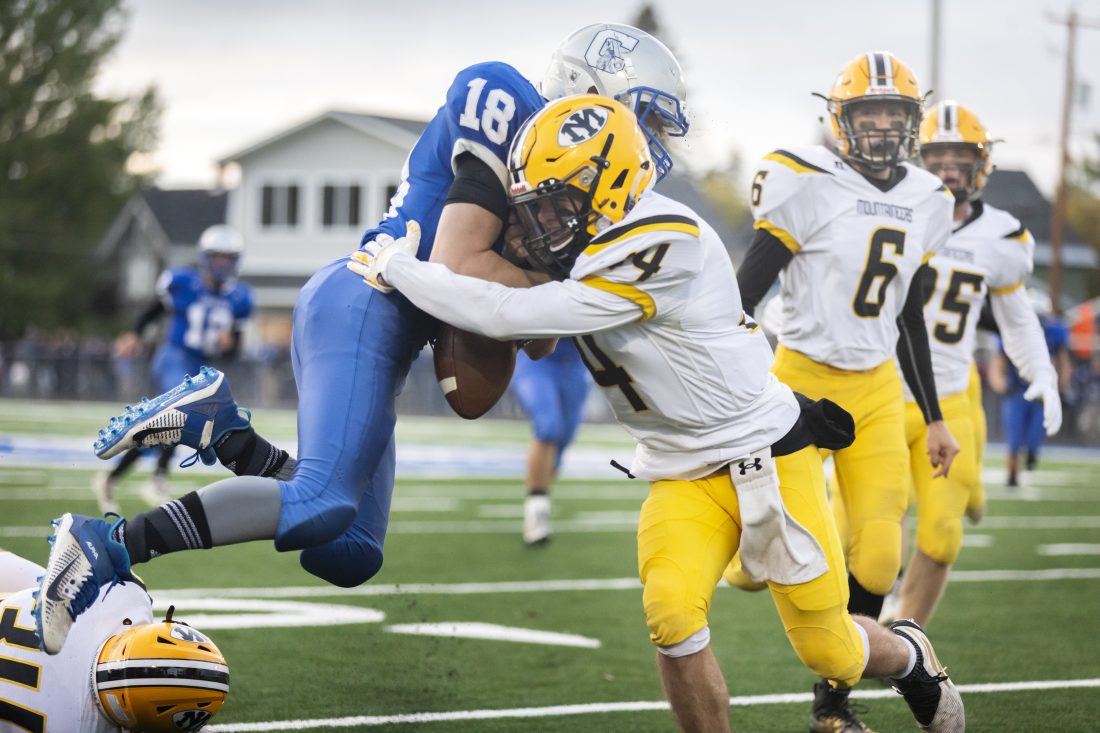 “They did some key converting. They had a couple third down conversions that were huge,” Croze said. “I just felt that if we could’ve gotten that ball back, we were starting to have some success on offense. For them to go down and get those first downs and keep their offense on the field, they were our defense down and were able to punch it in. On that two-point conversion was the difference in the game.”

The Copper Kings started the drive at their 35. They drove to the Iron Mountain 21 before a sack on first down set Calumet back to the Mountaineers’ 30. Another sack and incomplete pass set up a fourth-and-19 from the 30.

Copper Kings quarterback Scott Loukus threw a 30-yard touchdown pass to Peter Larson on a go route along the numbers on the right side of the field. Larson appeared to jostle for possession of the ball briefly before wrestling it away from Iron Mountain for the score. A tw0-point run by Nick Djerf put Calumet within one of the lead and 2:05 left.

“It was a great play by both quarterback and receiver there. It appeared the defender had the ball in his hands and somehow we ended up with it in the end zone,” Croze said. “It put us within one score again. Their two-point conversion put it a two-score game and that was tough to deal with at that point. We still got the ball back with a couple chances to run plays on offense. We were still a long way from the end zone, but what the heck. We persevered and gave ourselves a chance at the end.”

Iron Mountain was stopped a yard short on a fourth-and-4 to give Calumet the ball back at its own 25 and 17 seconds left. 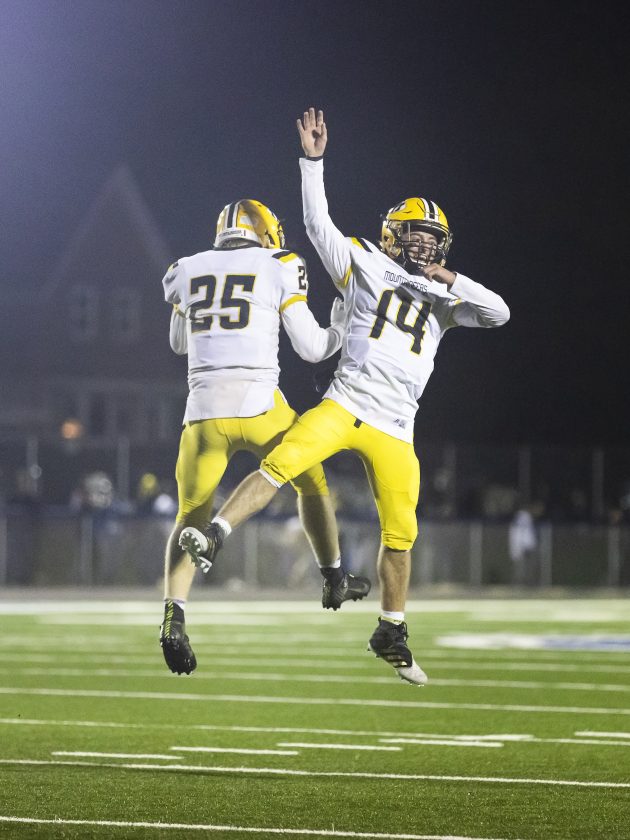 But Iron Mountain’s Evosevich-Hynes hauled in an interception and the Mountaineers knelt to run out the clock.

“Caleb Evosevich sealed it there with that interception. Give Calumet credit — they battled,” Marttila said. “They were down two scores in that fourth quarter but they weren’t giving up. They battled. Our kids battled. It was just a great high school football game. I couldn’t be more proud of the Iron Mountain Mountaineers tonight.”

The Mountaineers had 176 rushing yards with 90 from Evosevich-Hynes on 10 carries. Djerf led Calumet with 93 yards on 15 carries.

Johnson completed 2 of 5 passes for Iron Mountain for 27 yards.

The Copper Kings have a chance to qualify for the playoffs next week, when they visit Houghton. Iron Mountain hosts Hancock.

“That was one of our goals to make the playoffs, obviously,” Marttila said. “Now the goal is to get to 7-0. We have more goals just besides making the playoffs. We wanna get to 1-0 next week and just go from there. One week at a time. Whether you win or lose, one week at a time.”