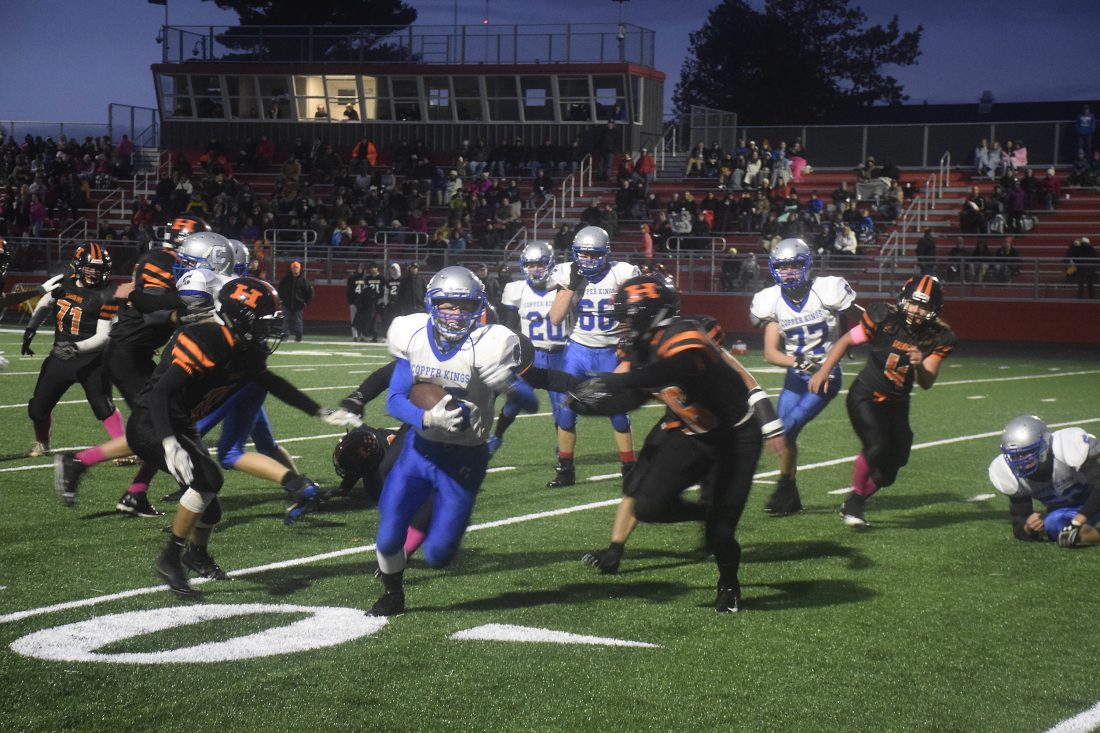 HOUGHTON — The Calumet Copper Kings are headed to the playoffs once again. They secured their postseason playoff spot with a 51-14 victory over the Houghton Gremlins Friday night on the road.

With the win the Copper Kings (6-1, 4-1) remain in second place in the West PAC behind undefeated Iron Mountain.

“It was a nice win for us coming off a loss from last week,” said Calumet head coach John Croze. “It was a great team effort.”

The Copper Kings came out strong and put up 30 points in the first 12 minutes of the game. It started at the 5:01 mark when senior running back found a hole with second-and-goal and punched it in for a touchdown. The two point conversion run by Nick Djerf was good to make it 8-0.

“We got our offense going right away,” Croze said. “With that we were able limited them to a couple of first downs early and capitalize on that.”

Less than two minutes later Calumet’s Dryden Nelson found himself in the end zone for another touchdown. A play later, he made the score 16-0 with the two point conversion. It was the first of four touchdowns on the night for Nelson. He led the Copper Kings on the ground with 11 carries for 156 total yards.

Less than 30 seconds after that score, Gremlins quarterback Tedd Halonen’s pass to receiver Ty Halonen was picked off by Calumet’s Dean Loukus, who ran it back for a touchdown.

The Copper Kings topped off the first with a big pass play with than minute to go. Quarterback Scott Loukus connected with Dean Loukus for a 50-yard pass play. The point after attempt failed, making the score 30-0.

“We made too many mistakes on the line to start the game,” said Gremlins head coach Kurt Huffmaster. “You cannot do that against a good team like that. We didn’t play well from the start.”

In the second quarter Nelson scored again on a 27-yard dash at the 3:26 mark. Trevor Torola added the point-after.

The Gremlins weren’t going into the half time with a goose egg. After taking over on their 46-yard line. With just 20 seconds left on the clock, Halonen launched a 50-yard pass to receiver Max Bennett who got the Gremlins in the red zone. A play later, Halonen carried the ball into the end zone for six. They got two more on their two-points conversion attempt. It was now 37-8 at the mid way point.

“At half time I told them to have some fun out there,” Huffmaster said. “We tried some new formations and mixed things up a little. What did we have to lose?”

Houghton continued their scoring ways in the third. In their first possession of the quareter, they put together a 72-yard drive that resulted in a Kaiden Zapolnik 7-yard touchdown run. However, their two-point conversion failed.

The Copper Kings tacked on 14 more points — all of them coming from Nelson. He had a 46-yard run midway through the third and a 14-yard TD run to start the fourth quarter, along with a two-point conversion run.

The Copper Kings posted 358 yards of total offense, including 282 rushing and 76 passing.

The Gremlins had 157 total yards of offense, 83 of which came on the ground and 74 passing.

“It’s always great to make the playoffs,” said Croze, “but we still have two big games coming up.”

Calumet hosts Hancock next week and close out the season at home against L’Anse on Oct. 25.

The Lake Linden-Hubbell Lakes’ offense rolled as they defeated the Munising Mustangs 56-6 on Friday.

Thirty-six of those points came in the second quarter alone. LL-H running back Caleb Gregorie led the way with 168 yards on 14 carries. He and quarterback Carter Crouch both had three touchdown runs. The Lakes had 447 total yards compared to 43 for the Mustangs.