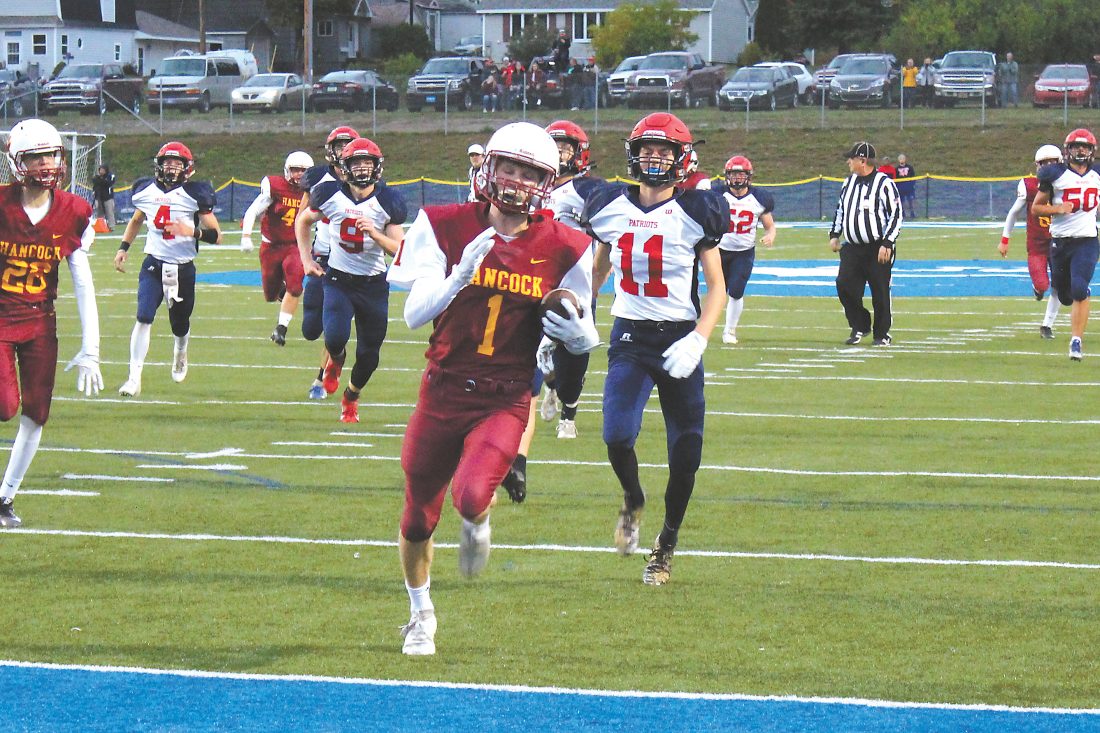 HANCOCK — Westwood knew it had a good shot at beating Hancock Friday night in WestPAC Gold Division football play — if it could limit the time of possessions for the Bulldogs.

That strategy worked perfectly for the Patriots.

The Patriots’ success was also assured because it had senior back Taylor Dellangelo to carry the ball.

“We didn’t do a great job on stopping their option game, but we played hard,” Hancock coach Ramon Sague said. “And Dellangelo just killed us.”

Westwood head coach Scott Syrjala said slowing down the Hancock one-two punch of Colton and Austin Salani was key to his team’s fourth win in six tries this season.

“(Hancock) is a heck of a team,” he said. “I don’t doubt that we could see them again (in the postseason. We capitalized on a couple of good things and that was enough to get a win.”

The performance of Dellangelo was needed to offset the aerial work of Colton Salani, who was good on 18 of 31 passes for 242 yards.

“He (Salani) has had a great season,” Sague said. “He kept us in the game tonight along with Austin Salani. It was really a good football game.”

Hancock (4-2) took a 7-0 lead in the opening quarter when Colton Salani hit Austin Salani with a 44-yard touchdown strike. He also hit the point-after.

But the Patriots answered back with a 53-yard scoring march capped off by Dellangelo’s two-yard run. A long pass from Dellangelo to Chad Pohlman set up the score.

The Bulldogs responded with a scoring drive of their own in the second period, Austin Salani scoring from 9 yards out. Colton Salani added the two-pointer for a 15-14 halftime lead.

Westwood took the second half kickoff and chewed up more than six minutes off the clock.

Dellangelo scored from three yards out later in the quarter to give WHS a 22-15 lead.

The scored swelled to 30-15 early in the fourth period as Dellangelo tallied again and added the two-pointer.

But the scrappy Bullogs weren’t done yet. After an interception by Peter Anderson at the WE-26- yard line.

Colton Salani scrambled in for a score from nine yards out. He passed to Austin Salani for the two-pointer for a 30-23 reading with about nine minutes left to play.

The eventual winners salted it away with another time-consuming drive. Dellangelo capped it off with five-yard TD run.