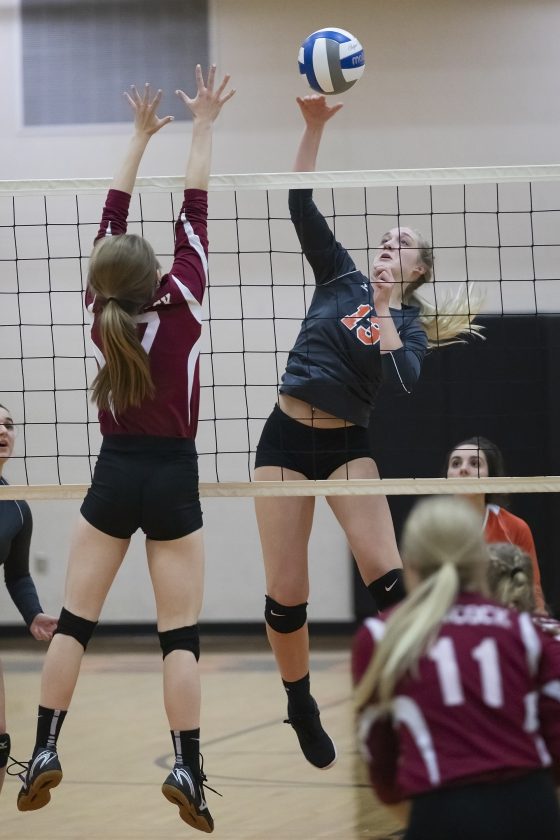 HOUGHTON — Houghton took control with a first-set win and rolled to a 3-1 win over rival Hancock on Thursday.

Houghton led by as much as 11 points (13-2) in the second set after edging out the Bulldogs on the first set.

Gremlins head coach John Christianson said the quality of the play with long volleys was exciting to watch.

“Two good teams hustling like crazy, keeping balls off the floor. How many times did the crowd think the ralley was over?” Christianson said. “And we got to it and sent it back or they got to it and sent it back. That just shows the hustle and determination of both teams. When you see that kind of stuff, then it’s fun. Both teams were swingin’ and diggin’. That’s what you want to see.”

“I feel that we played the name on the jersey tonight,” she said. “We did not play our game of volleyball at all. We were in our own heads. I think we got sloppy. We lost focus and I think ultimately they played better than us. I don’t think either team played great. They played better than us and we lost in a way that I don’t like losing.

“That first set we came out and battled back and fourth. We had a few errors and they had a little run and I think that’s what made the gap in the game. Both teams were playing well in the second set. I think we got in a little bit of panic mode after taking that first loss. We started off down and fought back for a little while, but ultimately that set just got to us.”

Despite losing big in the second set, the Bulldogs battled back in the third set and put Houghton’s defense on its heels. Hancock took a seven-point lead. Houghton teased the notion of a sweep by battling back to a three-point deficit (21-18), but the Bulldogs never relinquished and scored the final four points to force a fourth set.

It turned out like a mix between the first and second sets, as Hancock’s defense appeared troubled with floor coverage and rotation. Houghton tipped the ball into the middle of the court for points. Christianson said he’s emphasized making runs versus allowing them.

“Paige (Deforge) served 11 points in a row,” Christianson said of Deforge’s run in the second set. “We talk about volleyball is a game of momentum. You have to make runs, and you have to break runs. One of the stats we talk about a lot is our runs versus their runs.

“Paige had a phenomenal run in the second set. Neriah (Colombe) had a great run at the end of the second set when it was 20 and she got us to 25. In that fourth set, Nariah had a run that took us from a little bit, to way ahead. That’s critical. She was serving bombs. Those were nasty serves that she was putting in there.”

A pair of raucous Bulldogs’ and Gremlins’ student sections kept the gym buzzing all night. Heinonen said it caused some communication issues, but nothing major.

“I think it was hard to hear each other, but I don’t think it was the cause of the loss,” she said. “I think tonight we just weren’t quite ready to play and they played better than us.

“I love when there’s fans there. That should be something that feeds the team. I think the game just got to them a little bit — it was a big game. They kind of fell apart.”