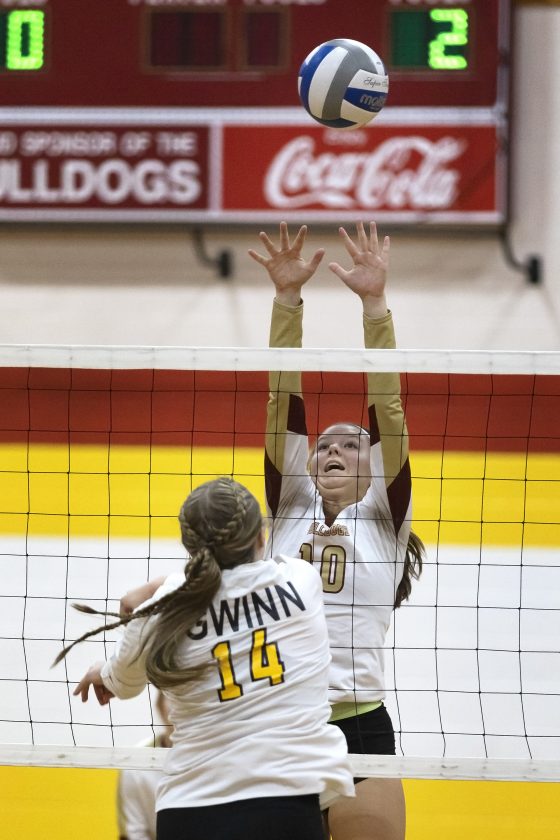 HANCOCK — Gwinn took an early lead and controlled the rest of the way in a 3-0 sweep against Hancock on Tuesday.

The Bulldogs hung around early in the first set, but Gwinn’s defense didn’t allow much on the night. That, coupled with Hancock errors kept the Bulldogs down throughout the night.

“We stayed aggressive and we were great on defense,” she said. “Ellina Miilu had a huge night for us on defense. She was confident and strong. She moved her feet really well. I think the girls fed off of her defense and played their own defense better.”

Hancock had brief leads, its largest a 2-0 lead to start the third set. Gwinn stormed back, outscoring Hancock 14-3. The Bulldogs made their biggest run late in the third set, turning a 16-9 Gwinn lead into a 20-17 margin. But the Modeltowners stopped Hancock’s run as they had all night and secured the win.

“I think Gwinn did a good job of not letting us go on runs and stopping when we had a few,” Heinonen said. “We’d score a few points and then they would stop us. We had trouble going on runs. They would shut those down right away. That’s what then set them apart in those games where they pulled ahead early on.”

Roberts said she was wary of the team’s long trip to Hancock and didn’t know what to expect.

“I’m always nervous when we travel long distance, because you never know what they’re going to do, if they’re going to have those bus legs or not,” she said. “I’m super excited that they came out ready to play right from the first set and were able to carry that all the way through.”

Hancock is at a bit of a crossroads at this point of the season. Heinonen said she saw sharp improvements early in the year. That’s tapered off since as the season’s grind wears on.

“I think at the beginning we saw a big jump in their game. It’s to that point now where our bodies are sore,” Heinonen said. “We’re tired, it’s hard to push. We’re starting to feel the grind. I think that this is the point, we talked about this after the game, where we need to push. We have so few games left together. We need to keep getting better. I think we’re getting better slowly, but still making those big gains that we were early on in the season.”