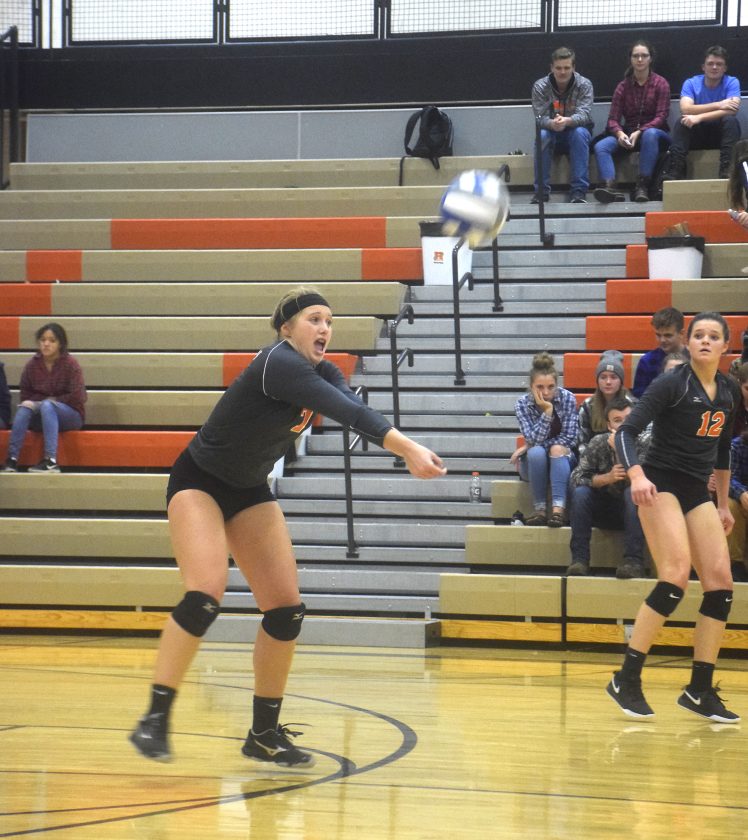 Houghton head coach John Christianson said he like the team effort his girl displayed on offense.

“Our offense tonight was very well diversified,” he said. “What made that possible was did a good job of passing balls and digging balls which gave our setter (Micaela Geborkoff) options to go in a number of directions.”

Geborkoff had 32 assists. She was setting the ball to senior hitters Rachael Hall who had 13 kills Daityn Markham who had 10, Jillian Cyrus who put down eight and junior Maryellen Trewhella who had six.

The first set was dominated by Markham who had a service run of 11 which included three aces . She carried the Gremlins from a 4-5 deficit and put them in a comfortable 15-6 lead during her rally. They would win it 25-15.

“We didn’t play well. We made some poor choices and got ourselves in trouble,” said Christianson.

On the other hand,. Mountaineers’ head coach Jeanne Newberry was please with what she saw in the second set.

“When our blockers were in step, we had some nice big block,” she said. “But then we would let down our guard.”

In the third and fourth sets, the Gremlins just kept putting the ball over the net, forcing the Mountaineers to make the mistake. The Mountaineers struggled to put any consistent offense together. They won the third set 25-18 and the fourth 25-15.

“We were flat and dragging in those last two sets,” Newberry said. “Some of that was due to sickness as not all our girls were at 100 percent. I thought we were spending most of those sets just reactin as we surviving to put ball over. We gave them too many free balls and hoped that they messed up but they didn’t. Houghton played well.”