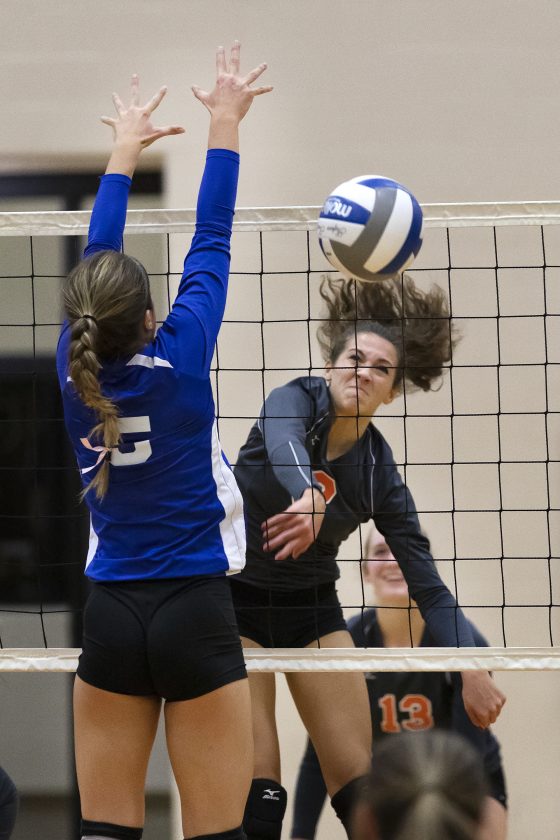 Pregame warmups were halted for Senior Night festivities and Houghton captain Daityn Markham left early in the game with an injury.

But the Gremlins’ coach said his team worked through the weirdness in sweeping West Iron County 3-0 on Tuesday.

“She did something in warmup — don’t really know for sure,” Christianson said of Markham’s injury. “When it was time for her to serve she said no. I pulled her out and she’s being looked at.”

Despite being in for just one rotation, Markham led the team with five kills on the night.

“I think the whole four minutes of warmup, then another four minutes of warmup, and then the break, and then four — that’s not typically how other Senior Nights have done it,” she said. “They usually have their Senior Night and then they get their full warmup. I think it kind of put us to sleep a little bit and it was hard to come back from that. It’s all right. We played and John’s got a tough team and that’s the way it is.”

The Wykons did all they could to prevent being swept. But the first half of their night was too deep a hole to overcome. West Iron struggled with serve-receives early on, which led to offensive struggles. Grubbs took a timeout in the first set with her team trailing 10-2.

Houghton cruised on after the timeout, extending to a 21-9 lead before taking the set 25-14.

The second set started like the first as the Gremlins took an 8-2 lead. Grubbs took a timeout with Houghton ahead 13-5.

“I just told them that what’s not happening tonight is we’re not able, or we weren’t passing the serve like I know we can,” Grubbs said. “They were letting a bad pass get in their heads. I said you need to play your game. You need to play what you know so we can set it up and go from there. We didn’t have a lot of good passes tonight, therefore setups weren’t happening. I think we can do a better job at that.”

West Iron cut the deficit to 18-16 and hung within a couple points through the rest of the set, until a Rachael Hall block secured the set win for Houghton.

The Gremlins grabbed a 7-2 lead to start the third set. The Wykons tied it at 8-all. Both teams traded leads before Houghton took the lead at 21-20 and then 25-24.

The Gremlins held on for the 26-24 win to clinch the sweep.

Christianson said he tried giving ample playing time on the night to his seniors.

“We tried to get the seniors a little extra playing time in the back row and get them serving,” he said. “Most of them did really a pretty nice job. Some of them aren’t used to playing that much in the back row and then I went back to the regular rotations. I was for the most part, I was pleased with their reaction to adversity and playing above and beyond it.”

Houghton is at Kingsford in the MHSAA districts on Monday. West Iron County hosts Hancock.

LAKE LINDEN — Lake Linden-Hubbell swept Ironwood by scores of 25-22, 25-22 and 25-20 on Tuesday. Joslynn Perala led the Lakes with 16 kills and Melissa Wagner had nine. Camaryn Crouch had 14 digs.