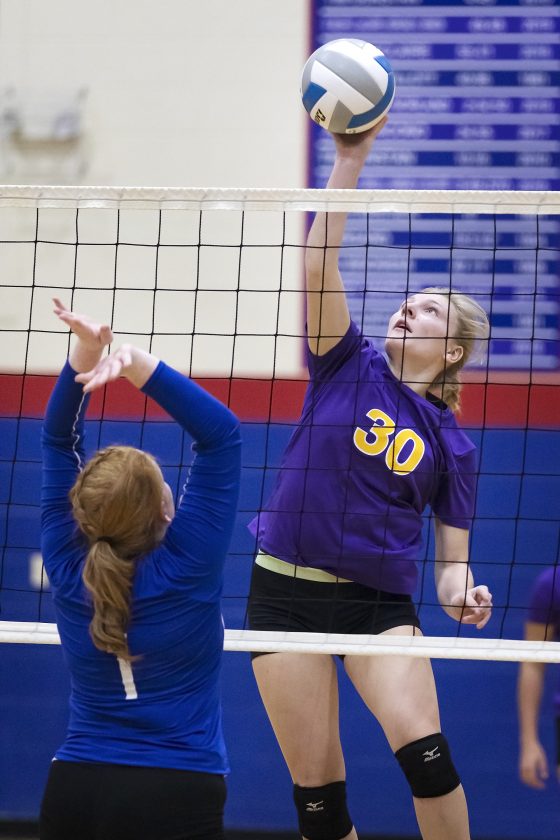 DOLLAR BAY — The Baraga Vikings squeaked out a 3-0 victory on the volleyball court Wednesday against their cross-town rivals the Dollar Bay-Tamarack City Blue Bolts.

Despite the sweep, Dollar Bay forced the Vikings to fight in the final two sets, while nearly claiming their first set victory of the season.

“I was happy with the win, but I thought we could have played better,” said Baraga’s head coach Corey Pietila. “We are a work in progress.”

The first set started out with an ace for Baraga, and the Vikings jumped out to a 6-4 lead. However, Dollar Bay came back and tied it at six under the service of sophomore Tatiana Reyes-Luoma. The Blue Bolts then went ahead with a 9-6 lead but lost possession and Baraga tied it at 10. It was tied again at 13 and then the Vikings pulled away as freshman Corina Jahfetson put up some hard serves which the Blue Bolts struggled to receive. A 19-14 lead by the Vikings turned into a 25-15 first set victory.

“We had too many serving errors in that first set,” Pietila said. “We had six total and that is too many.”

The Vikings (4-4) started the second set off like the first with an ace ad set up a comfortable 9-3 lead. However, the Blue Bolts inched their back to a five point deficit at 17-23 and freshman Kenya McCrum took from the service line. She pushed the Bolts to a 23-23 tie with her consistent touch over the net. It was tied at 24 and 25 before the Vikings posted two points in-a-row for a 27-25 victory.

“I didn’t think the girls played to their full potential,” Pietila said. “There were too many hiting errors and passing errors

Baraga continued their winning ways in the third set with senior Courtney Tembreull putting up some strong early serves with a number of aces and moving her squad to a 11-4 lead. The Blue Bolts once again climbed back into the match with the help of freshman Ashlea Datto and junior Molly Myllyoga. It was tied at 15 and the Blue Bolts moved out in front to take an 19-18 lead.