Rally weekend fun for everyone 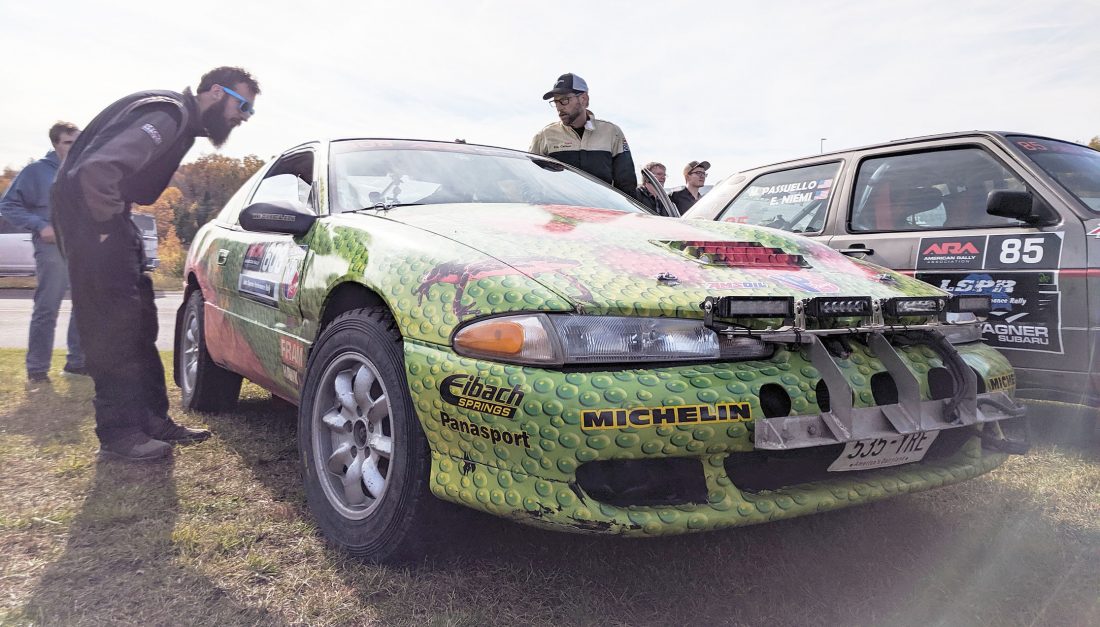 From midnight engine swaps to cars bursting into flames, the Lake Superior Performance Rally (LSPR) provided two days of fun and excitement for spectators and participants alike on its 25th anniversary. Held on back roads and downtown Houghton on Oct. 17 and 18, the LSPR prides itself as the “oldest, biggest, meanest rally” on the American Rally Association’s (ARA) calendar. People from around the world gather for the event from as far away as Russia, and former World Rally Champion Petter Solberg’s son Oliver added a bit of star power to this year’s rally.

(Joshua Vissers/Daily Mining Gazette) Skyler Fontaine, mechanic for Team Huuki, received help and supplies from other teams to keep their car in the race after loosing an exhaust gasket.

(Joshua Vissers/Daily Mining Gazette) One of the mechanics for the McKenna Motorsports team, midway through and engine swap from car No. 689 Friday after dark in Sidnaw.

(Joshua Vissers/Daily Mining Gazette) The Dogfather’s concession stand kept busy late into the night at the service area in Sidnaw.

(David Archambeau/For the Gazette) Finlandia’s Teddy Randell controls the puck in the neutral zone during a game last season in Hancock.

The cars provided international flare as well. More than half the field ran Subarus, the only ones of those which were not Imprezas were rear wheel drive BRZ coupes. Fiestas made up another sizable chunk of the entrants, a car more popular in Europe than in the United States. There was also a pair of old European-styled Fords, a 1974 Capri driven by Mike Furst and Michel Hoche-Mong and a 1977 Escort driven by Seamus Burke and Martin Hardy, and a handful of Hondas, BMWs and Volkswagens.

Of the Subarus, a bright yellow and black 2000 Impreza driven by Steve Gingras with his daughter Katie stood out in the crowd. It was Steve’s first time back for the LSPR in 15 years and his second race with his daughter, a Michigan Technological University graduate. They built the car together over the last year, something that played a role in landing Katie a job in biomechanical engineering. Steve said the single most important thing that went into the car was the suspension, and they were able to earn themselves a fifth place finish in the regional standings with a time of 2:13:7.5.

One of the more unusual cars present was a 1988 Ford Mustang powered by a 302 cubic inch V8. Mustangs are more at home on drag strips than rally courses. Driver Andrew Mozer thought that it would be fun to enter one in the rally, and found this red one within his budget. He has been racing it for four years, and has put extensive work into it since crashing it at the Susquehannock Trail Performance Rally (STPR) three years before. Before the rally he stated his intent to put on a good show, to get the car sideways and throw some rocks. His co-driver is his brother Andrew. They finished 31st overall with a time of 2:28:01.2

Another unique vehicle entry was the 1992 Mitsubishi Eclipse driven by Eric Carlson with his daughter Camille co-driving. The turbocharged all wheel drive model was state of the art when it hit the market in the early 1990s, and it is a perfect drivetrain for running a rally on dirt roads. The 20 year rally veteran said this was possibly his last race. They finished 35th overall with a time of 2:34:21.2. 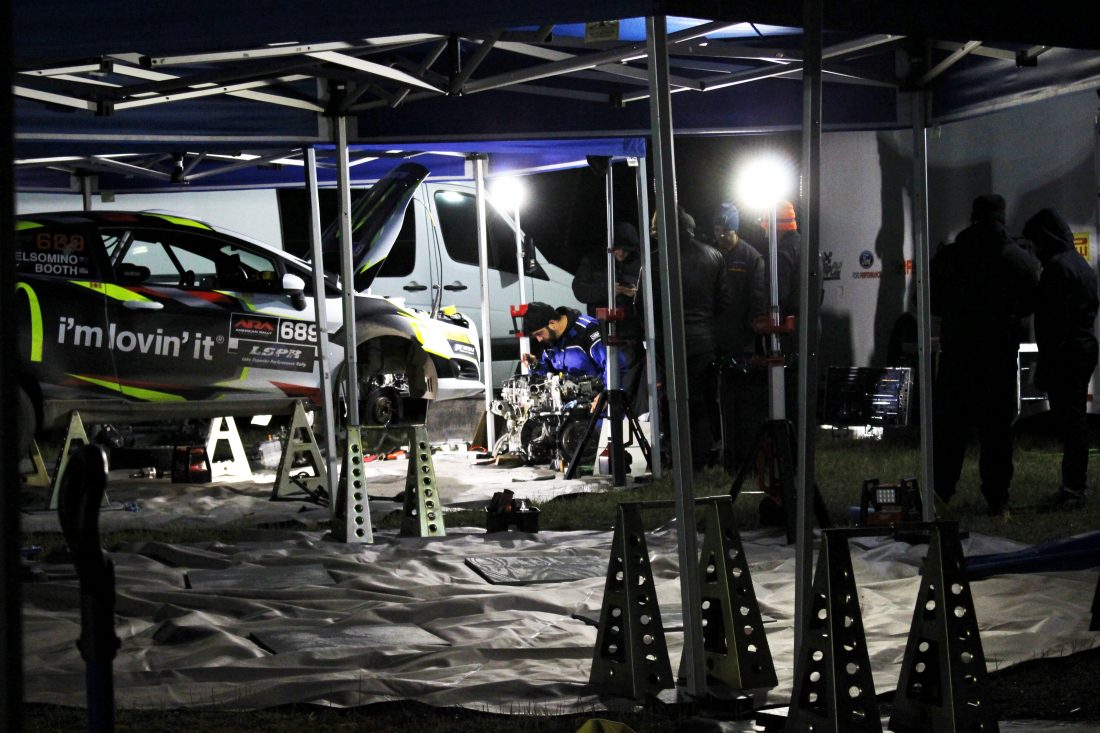 (Joshua Vissers/Daily Mining Gazette) One of the mechanics for the McKenna Motorsports team, midway through and engine swap from car No. 689 Friday after dark in Sidnaw.

The Tower City Race Team (TCRT) was back this year as well with a pair of Volkswagen Golfs and a 1987 Mazda RX-7. RX-7s are powered by Wankel rotary engines, a design unique to this model, but after blowing two of those the TCRT went with a traditionally more reliable setup: a GM LS3 V8 motor that fit nicely in the engine bay where the tiny rotary had once been. Driver Al Dantes Jr. said they had finished swapping in the new engine 2 days before their next race. He said that testing the LS3 was done on the way to the rally, and it has performed admirably since. This year, the V8 helped them claim third place in their class, achieving 15th overall in the regional with a time of 2:25:40.6.

According to volunteer coordinator Barb Harty, around 70% of this year’s field were return racers. This year the LSPR is the final race of 12 on the nationals calendar, although there are more regional events. Drivers declare before the start of the race whether they are racing at the national or regional level for points. There is no prize money, but the winners get to take home a trophy and bragging rights.

This event is made up of an army of volunteers. People come long distances to help, and the process starts months in advance with routes being marked out, permits being arranged, and property owners being informed. Volunteers coordinate with local businesses and organizations to provide services for the event, be it food for spectators or EMTs and ambulances whose presence is mandatory at the start of each stage. Hardy also stressed that none of this is possible without the support of the local communities. Having the hotel accommodations for the teams and volunteers is important, but the worker base is essential.

Winners for this year’s event included the spectators, for whom the rain held off until the end of the final Arvon stage near L’Anse. Balmy temperatures in the 60s were in stark contrast to the snowy conditions of last year, making for a pleasant viewing experience under the last of the fall colors. 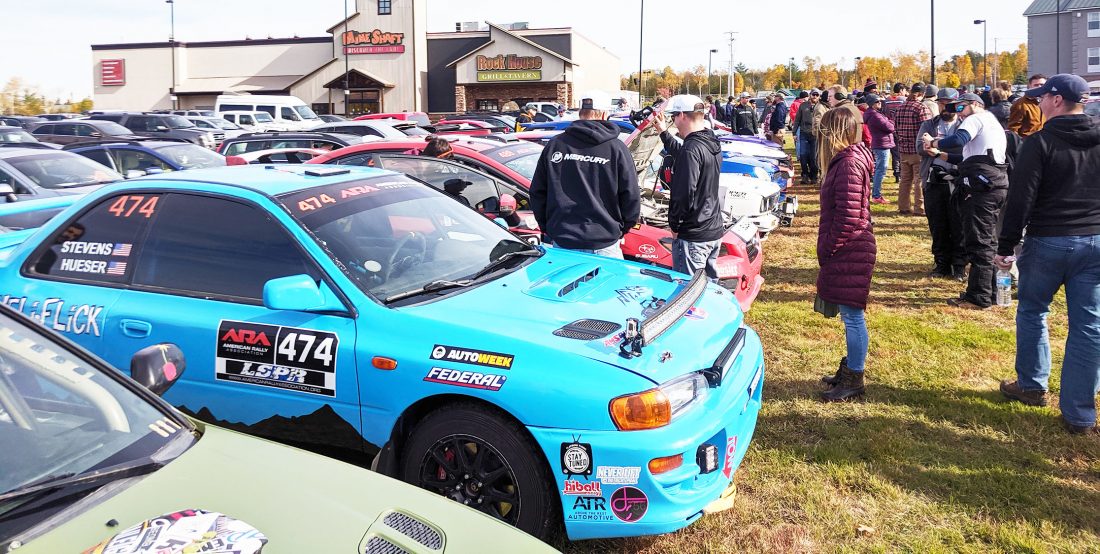 (Matthew Streeter/For the Gazette) More than 200 people came to Friday's parc expose to check out the cars before the weekend's rally covers them with dirt and damage. 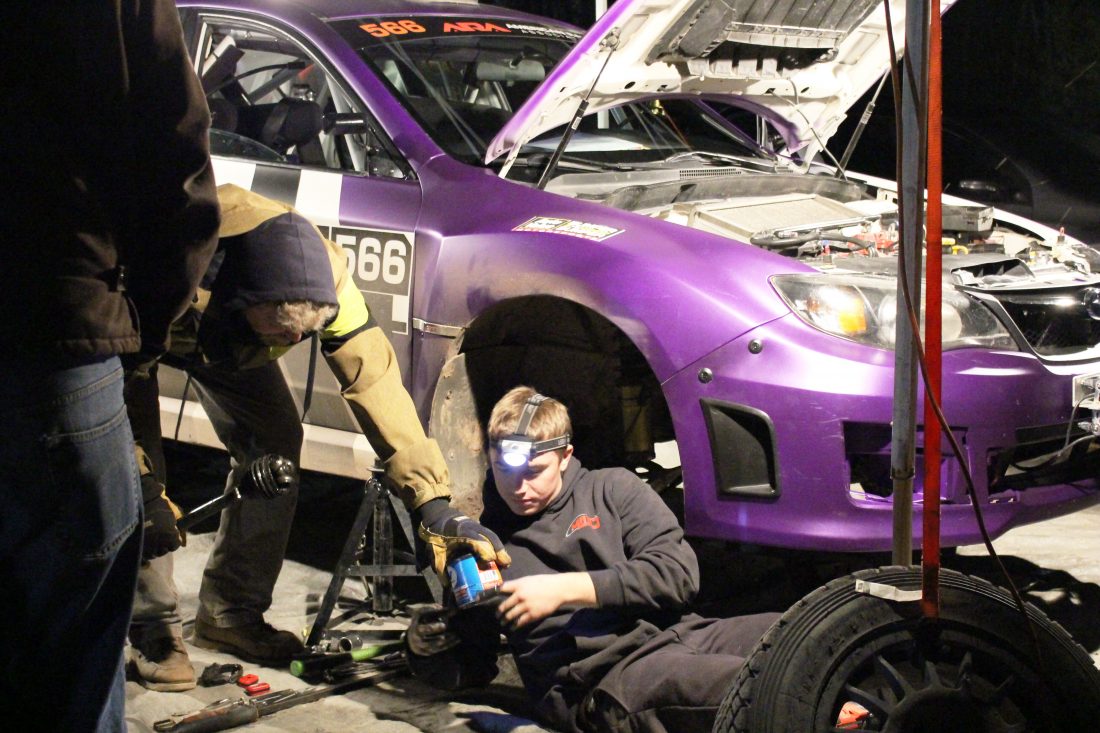 (Joshua Vissers/Daily Mining Gazette) Skyler Fontaine, mechanic for Team Huuki, received help and supplies from other teams to keep their car in the race after loosing an exhaust gasket. 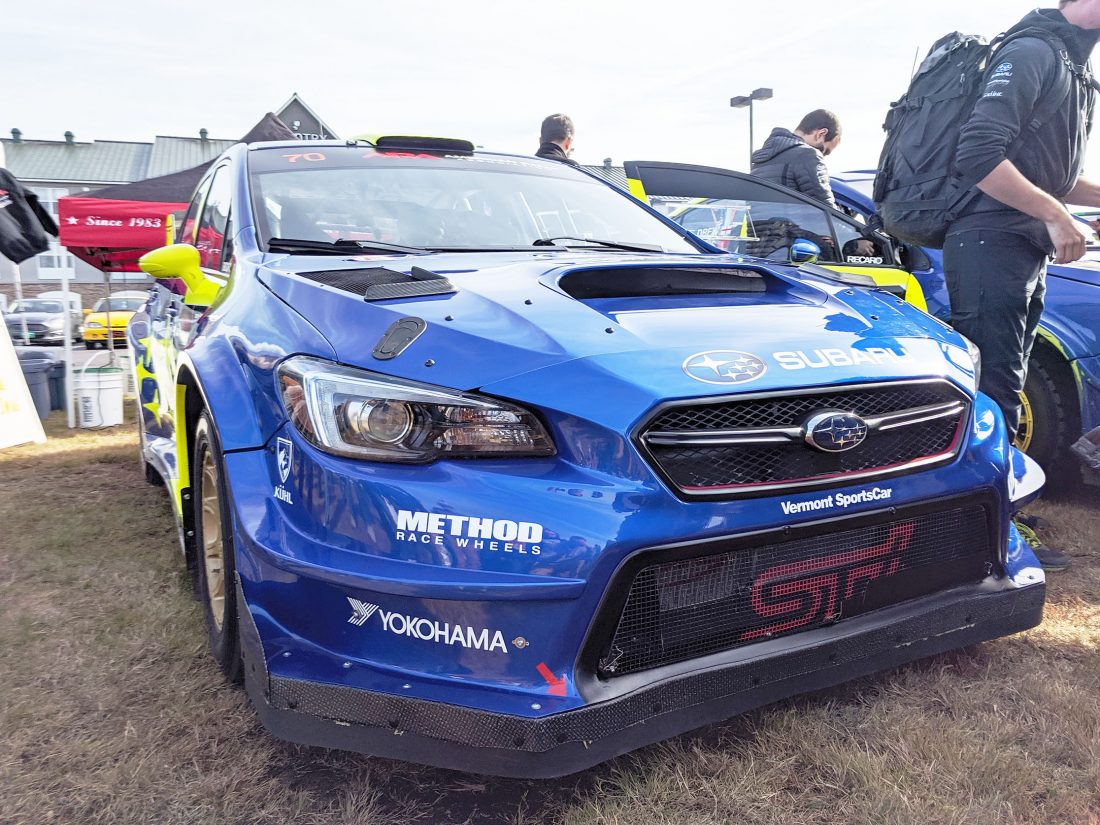 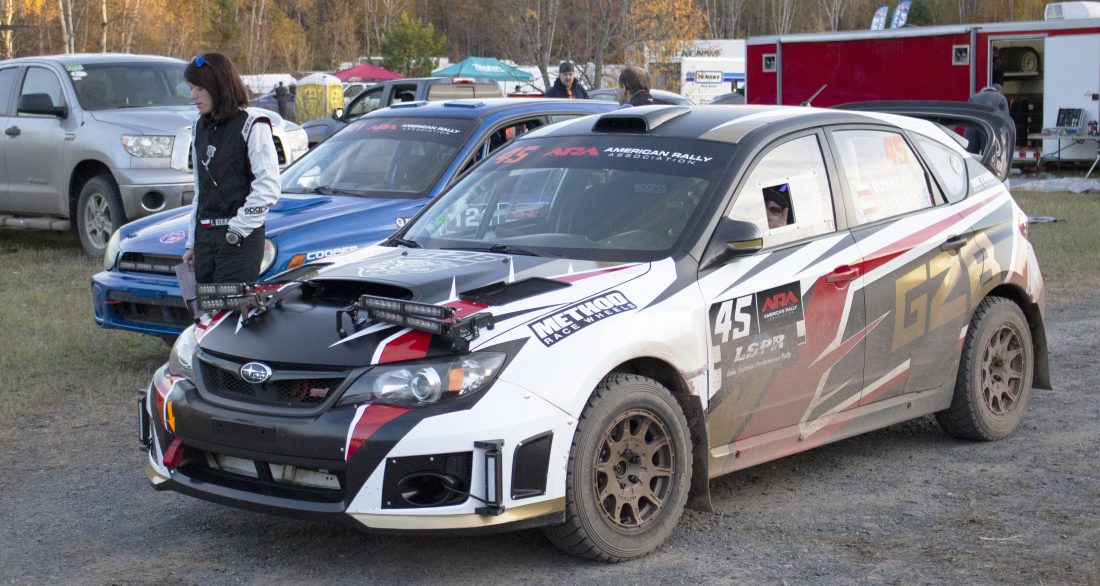