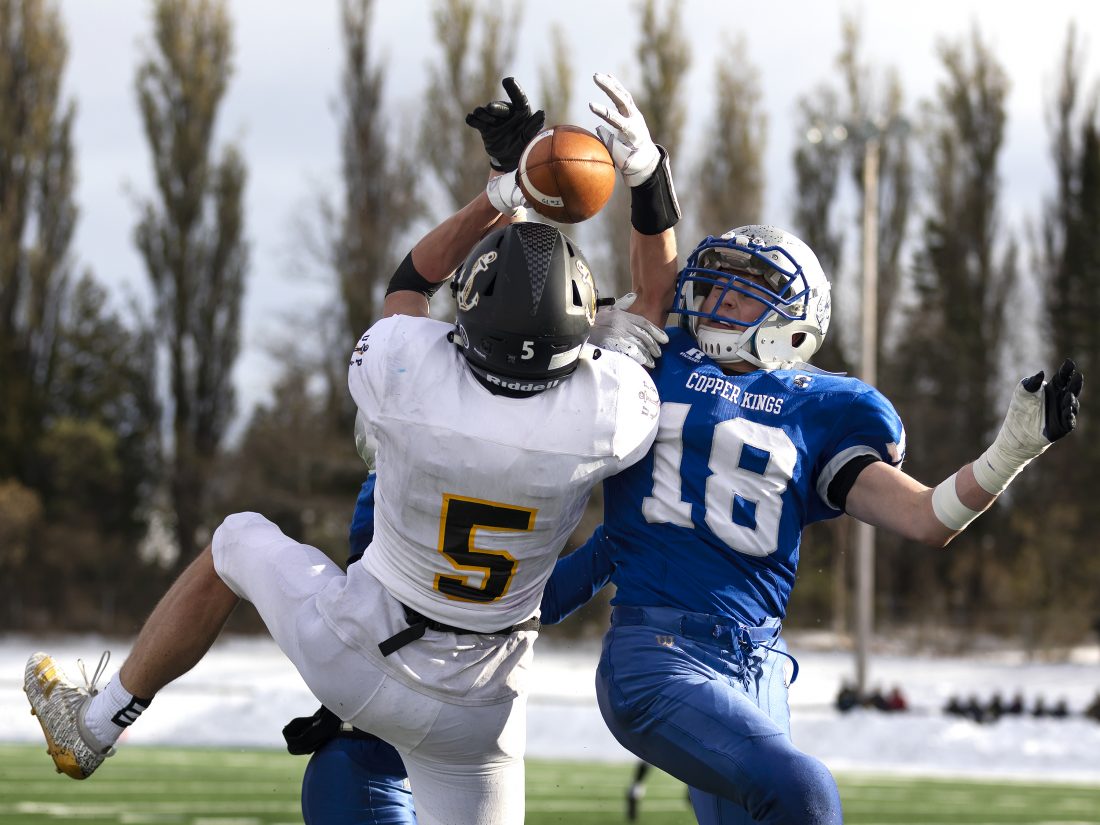 CALUMET — It was only fitting that the Division 6 regional championship football game between Calumet and Glen Lake would come down to the final minute of regulation Saturday at Agassiz Field.

After all, the two 10-1 powerhouses battled each other tooth and nail throughout the chilly afternoon.

It wasn’t until junior defensive back Finn Hogan of the Lakers intercepted a pass in the end zone with 1:13 remaining that the Lakers could draw a deep breath.

“The games we play against Calumet are all like this one — hard hitting and hard fought,” Lakes’ coach Jerry Angers said after his team’s 15-14 nail-baiting victory. “We know what we were facing, a well-coached team that hits hard.” 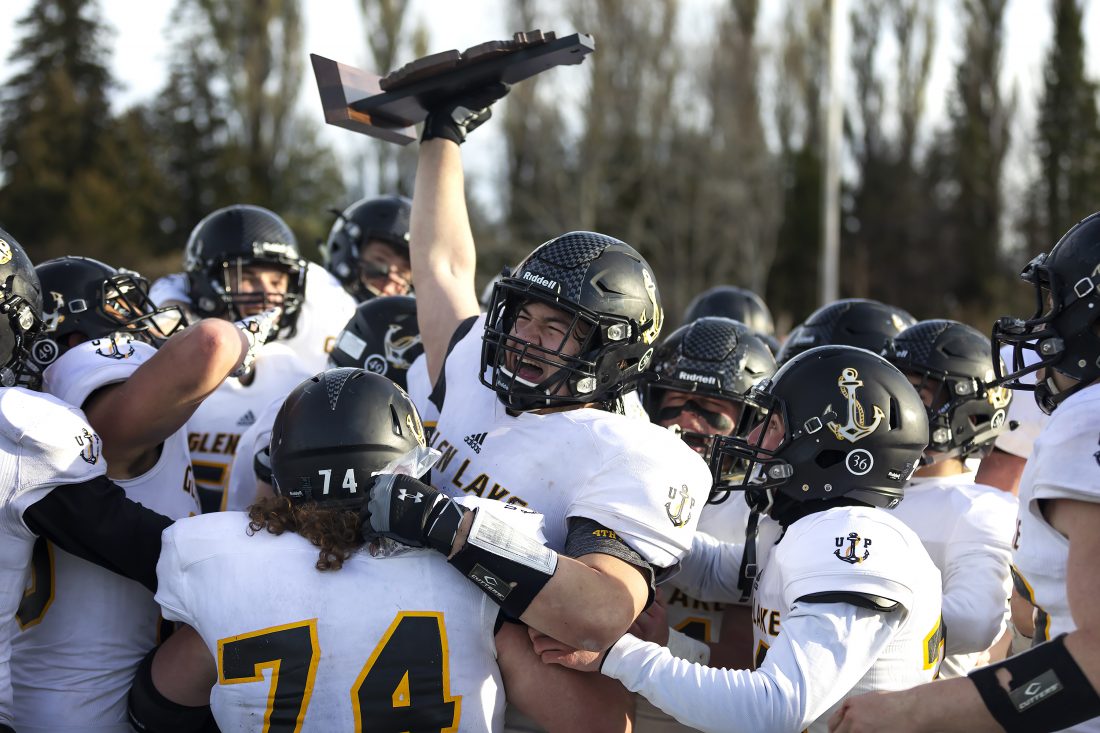 Calumet head coach John Croze said his team left it all on the field.

“They (Lakers) made one more plays than we did,” Croze said. “There’s not much more I can say. We gave ourselves chances to win and I’m proud of the effort. That’s a heck of a team that beat us.”

in the end, the difference came after Glen Lake tied the game at 14-14 late in the third quarter.

It was then that sophomore placekicker Brady McDonough came in and drilled the extra point for the lead.

“I told the kids after halftime, I said we’re gonna go down and score, we’re gonna kick the extra point and we’re gonna beat ’em 15-14 just like Iron Mountain did,” Angers said of the Mountaineers’ win at Agassiz Field on Oct. 4. “That’s one of those things you do and again, our kids, they stepped up to the table and won the line of scrimmage and came down and hit people.” 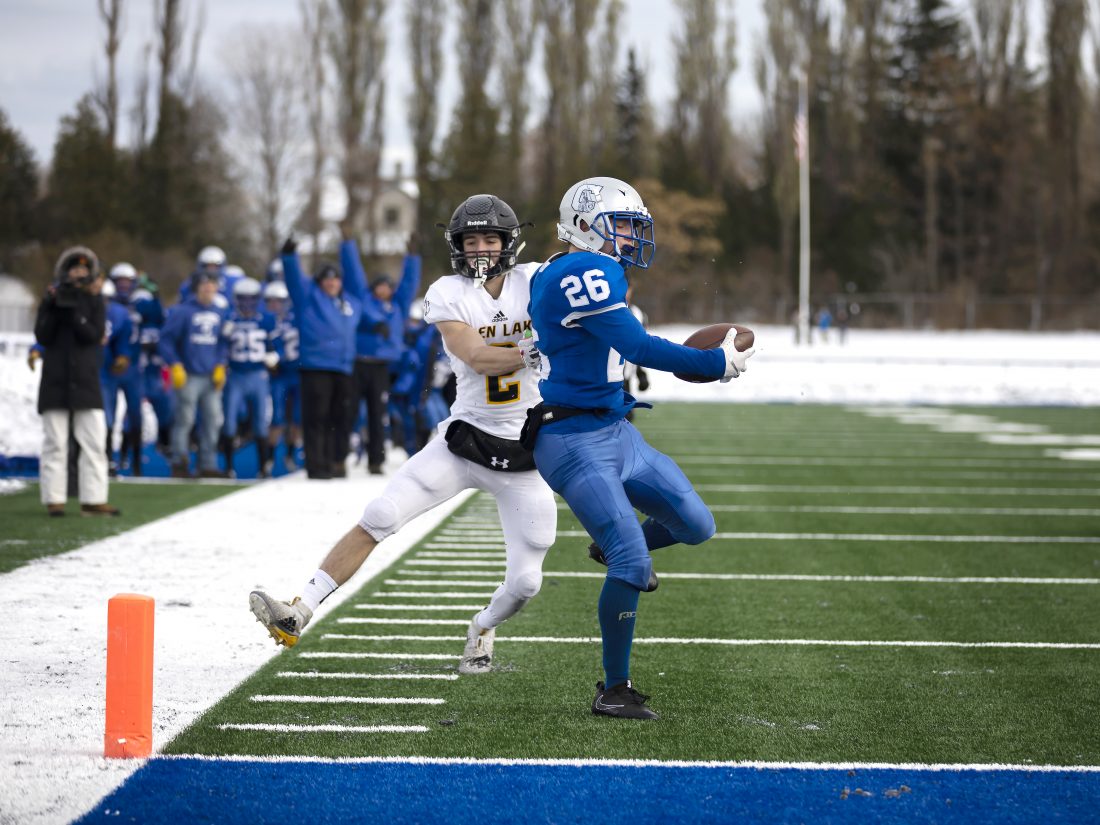 Calumet had two excellent scoring opportunities in the final minutes.

One came after Lakers quarterback Reece Hazelton fumbled a center snap at midfield early in the fourth quarter that the Copper Kings recovered.

The Copper Kings were unable to capitalize on that chance. Angers said he challenged his seniors in the fourth quarter.

“The funny thing is I talked to one of the seniors during one of the timeouts and said you guys are seniors,” Angers said. “Do you want the season to end, or do we wanna meet on Sunday and watch film and get yelled at? They chose to watch film on Sunday and get yelled at. I’m just so proud of my seniors, especially my senior D-linemen that have been with me. I’ve got three or four of them that started for me as a sophomore and they went in and just made some huge plays.”

But Calumet got a huge break later in the period when a bad snap from center on a punt sailed wildly and was recovered by Calumet at the Lakers 29-yard line. 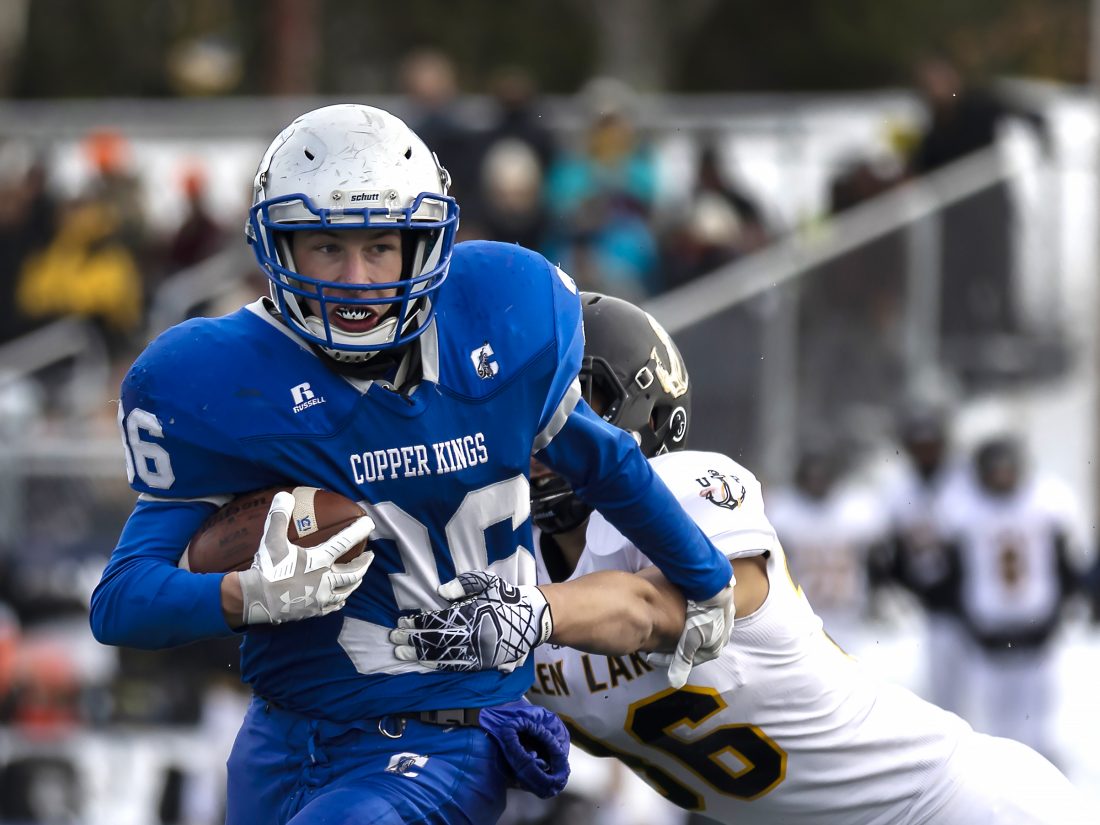 After getting a nice run from Dryden Nelson, Calumet went for it all when Scott Loukus fired a pass toward the end zone that was picked off by Hogan.

Angers said his defense was prepared for the pass play.

“We noticed that Calumet used that pass play after getting a turnover (in other games),” he said. “We had some people back there and Finn (Hogan) got it.”

Hogan played a big role in the outcome.

Besides making the interception, he caught five passes for 124 yards and a touchdown. 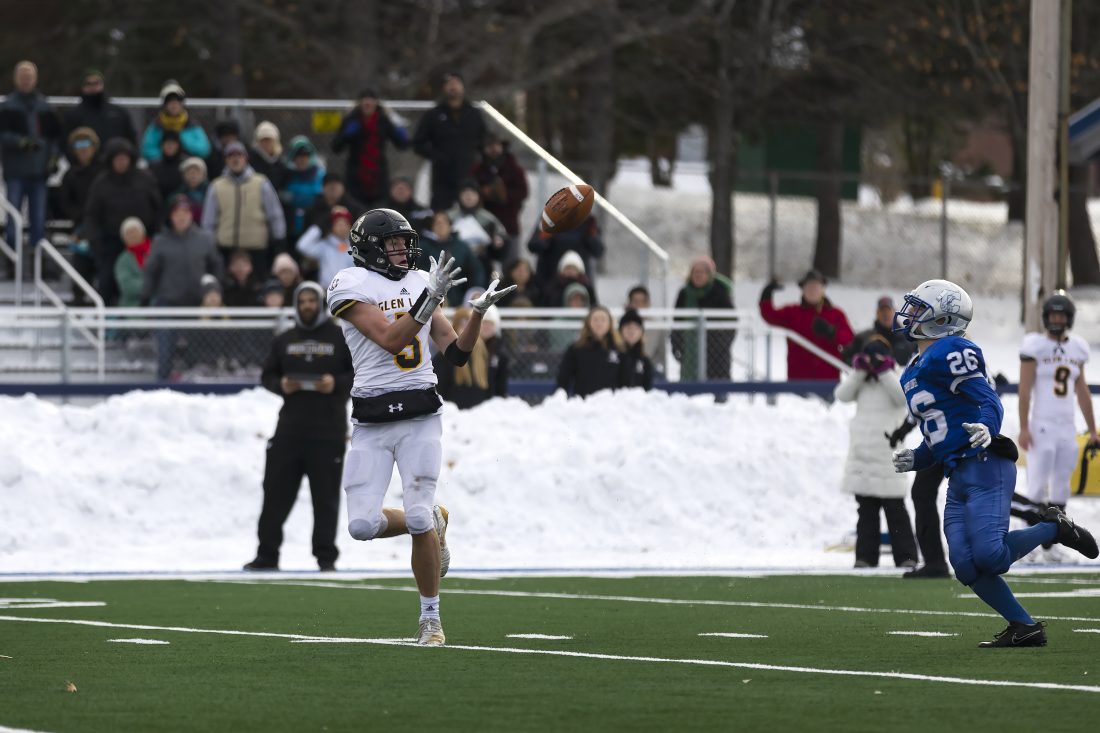 Calumet, which was outweighed by 25 pounds in the line, managed to keep 6-foot-6, 190-pound quarterback Hazelton in check.

“We did a great job. We were giving away so much size up front,” he said. “Our guys did a great job handling the pressure. We had a chance to win it in the end and just didn’t make a couple of the key plays that were required for that win.

“One of our keys was to keep their quarterback under wraps. He’s dangerous in the open field.”

Glen Lake grabbed an early led when Jonathon Wright raced eight yards for a score in the second quarter. Hazelton ran in the two-point conversion. 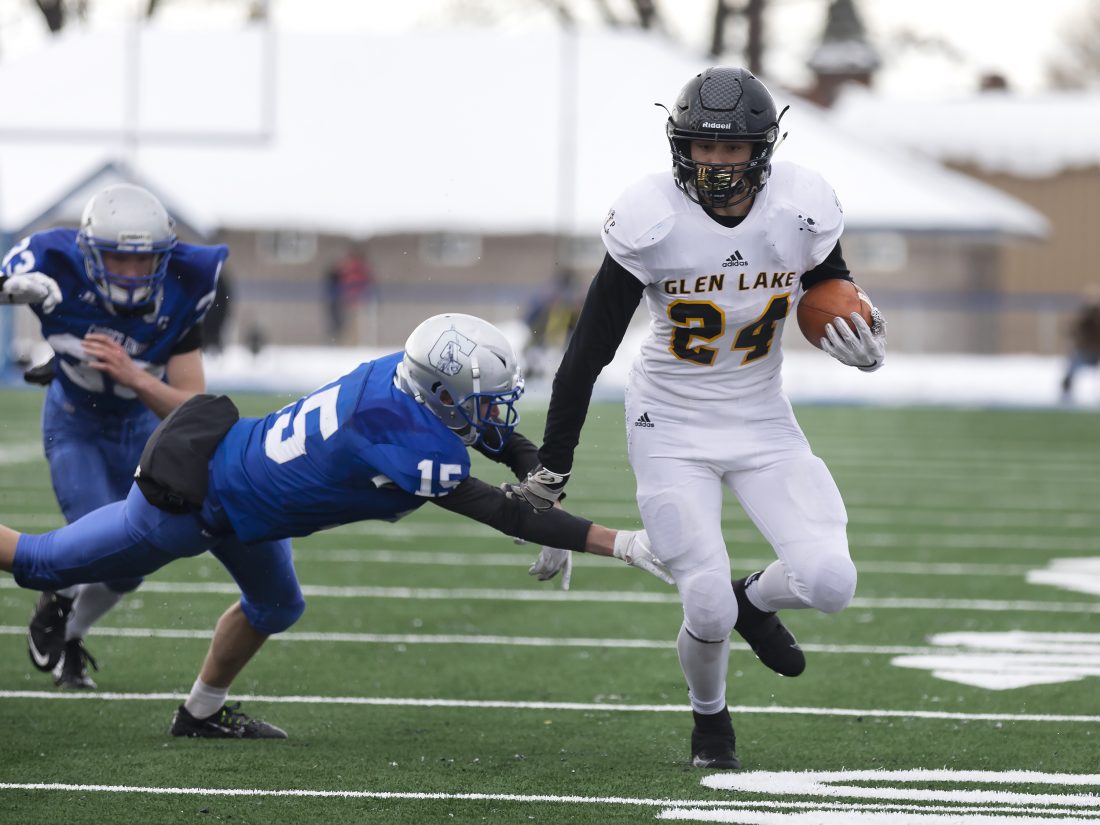 Calumet got that one back when Loukus spiraled a 46-yard TD strike to Dean Loukus. Loukus ran in the two-point conversion to tie the game at 8-8.

The Copper Kings almost cashed in on the final play of the half when a Hail Mary pass by Loukus just missed.

The Copper Kings took a 14-8 lead in the third frame on an eight-yard by Dryden Nelson.

The all-important PAT run by Loukus was stopped short, however.

The winners tallied not long afterward when Hazleton threw a 56-yard scoring pass to Hogan.

Hazelton completed 8 of 10 passes for 139 yards with a touchdown and two interceptions.

Wright led the Lakers’ rushing attack with 38 yards on 13 carries and a touchdown. Hazelton ran 19 yards on eight attempts.

Calumet had 219 yards of total offense, including 149 rushing and 70 passing.

Calumet was held to 1 of 6 on fourth-down conversions. The Copper Kings were also 3 of 12 on third downs.

The loss was a heartbreaking close for Calumet’s season. Saturday was the Copper Kings’ second loss of the year. They lost both games by a combined two points after losing to Iron Mountain on Oct. 4 by the same 15-14 score.