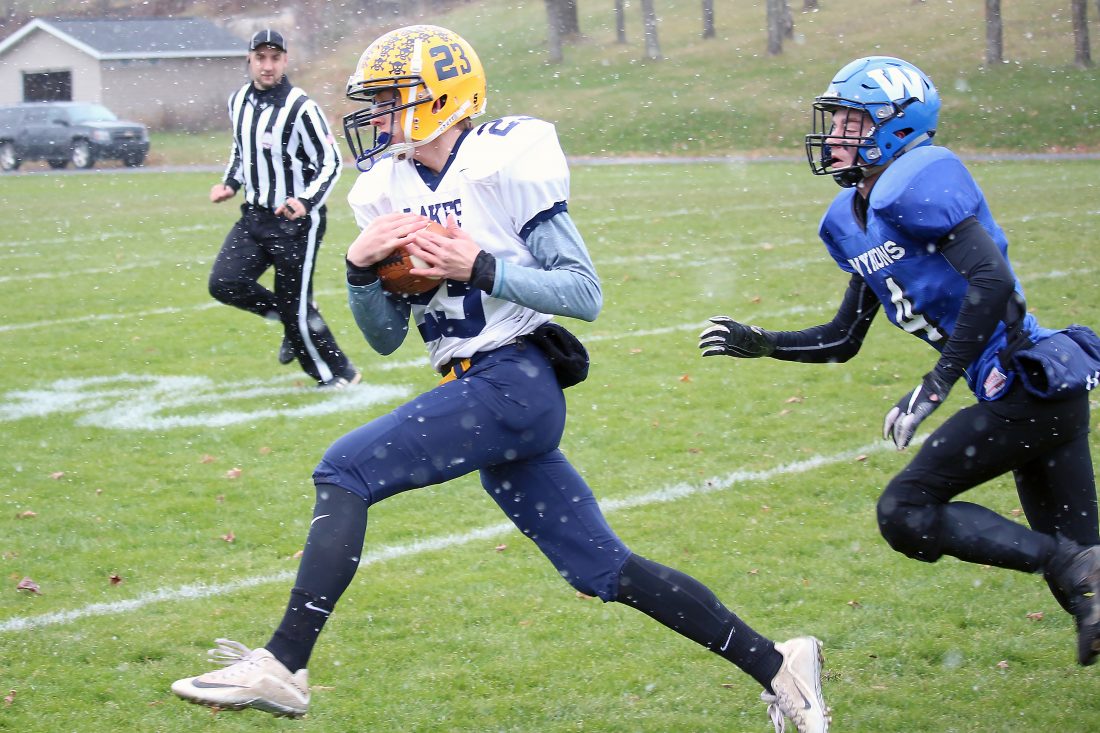 STAMBAUGH — The Lake Linden-Hubbell Lakes generated plenty of momentum shortly before halftime Saturday as they handed the West Iron County Wykons a 36-14 loss in an MHSAA Division 8 pre-district at Nelson Field.

LL-H senior defensive back Luke Marcotte intercepted a pass on the final play of the first half, just seven seconds after the Lakes gained a 14-0 lead on senior quarterback Carter Crouch’s 12-yard pass to junior end William Lyons.

“We got a lot of momentum right before the half,” said LL-H senior running back Caleb Gregoire. “We were all feeling pretty good. The interception was huge.”

The victory sends the Lakes (7-3) to Ishpeming for the district championship game at 1 p.m. Saturday. The Hematites (8-2) buried Bark River-Harris 48-8 in a pre-district Friday. The Wykons finished 7-3.

Gregoire also had an interception early in the third quarter as the Lakes maintained their 14-point cushion.

West Iron appeared to catch a break midway through the third when senior linebacker Trey Bociek recovered a fumble on its 46-yard line, but the Wykons were unable to capitalize.

Gregoire gave LL-H a 20-0 advantage 58 seconds into the fourth quarter on a 27-yard run.

Bociek got the Wykons on the board with 9:10 left to play when he spinned through the middle on a 2-yard QB keeper.

Gregoire scored again just 13 seconds later on a 57-yard dash along the right sideline for a 28-7 advantage.

LL-H’s advantage ballooned to 36-7 midway through the fourth when Gregoire broke off left tackle for a 35-yard score.

“I had good blocking from my teammates,” said Gregoire, who rushed 15 times for 154 yards and three TDs. “The guys blocked pretty good in the first half, but I think they blocked even better in the second half.”

The Lakes marched 65 yards on 11 plays during their opening possession, gaining an 8-0 lead on Crouch’s 12-yard aerial to Gregoire midway through the first quarter.

LL-H was on the move during its second possession, then lost a fumble on the Wykons’ 39-yard line.

West Iron then mounted a drive before turning the ball over on downs at the Lakes’ 11.

The Lakes gained 346 yards of offense including 257 rushing and 89 passing. Gregoire led LL-H with 154 rushing yards on 16 carries.

West Iron’s offense was limited to 78 yards in the first half, and Bociek, under heavy pressure most of the afternoon, was 1 of 6 passing for nine yards before the intermission. He finished with 7 of 18 for 86 yards and two interceptions. Senior running back Noah Lewis led the Wykons in rushing with 64 yards on 11 carries.