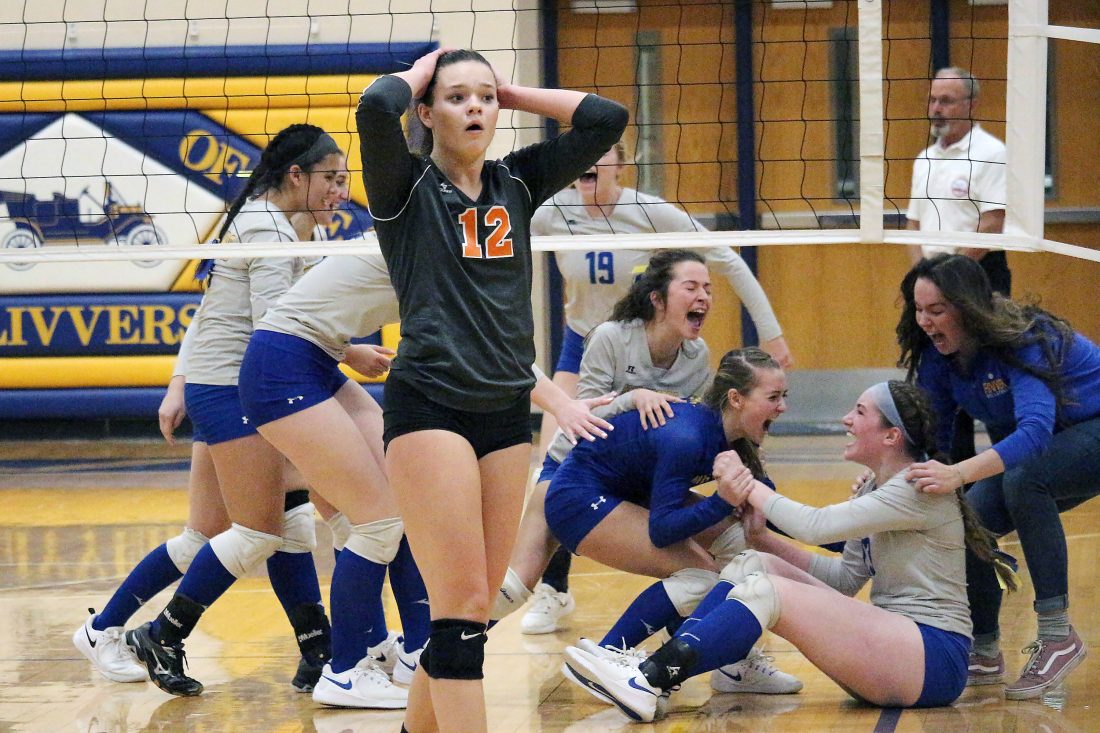 “I’m just so proud of the girls,” Flivvers head coach Jaclynn Kreider said. “There were moments there in sets two and three especially where I didn’t even know how to help them. I finally just said to them to quit looking at us to coach them. They know what they needed to do. They just needed to play together. This is a group of girls who have been together working really really hard for a lot of years. And that’s what it needed to be, some guts, some heart and just playing together. I’m just really proud of them.”

Kingsford moves on to face Escanaba in a district semifinal Wednesday evening at 6 p.m. The Eskymos, who feature Great Northern Conference Defensive Player of the Year Jalin Olson, won both regular season GNC meetings against the Flivvers.

“We’re just excited,” Kreider said. “Skill wise, we’re evenly matched, so it’s going to be a fun battle. It will come down to who can get some momentum and show up with some guts and heart. Hopefully, that’s us.

“They’re a team that it’s hard to put the ball on the floor against. Olson really dictates a lot defensively. But skill wise, we’re evenly matched. It will be about heart and mental toughness.”

An intense and tight final set was tied 13-13 when a kill by Daityn Markham, Houghton’s leading attacker with 11 kills, gave the Gremlins first crack at match point. But a long serve knotted things right back up. Kingsford fired too far on its next serve, giving the edge back to Houghton for another try to end the match. But another serve sailed too far and the match was extended.

Maggie Strehlow then slapped a quick-fire shot down near sideline to give Kingsford the advantage, and she followed with a slam on the next point to set off the Flivver victory celebration.

“We had some errors there and they did too,” Kreider said. “I knew if we could hang in there, we could do it. We just had to keep hanging in there.”

Already leading the match two sets to one, the Gremlins ran out to a quick 5-2 lead in the fourth set. But Cook stepped up and helped Kingsford recover the momentum. She stopped the Gremlins with a tip for a point at 5-3, and then added another tip, a block and kill to help Kingsford to a 7-6 edge. A Markham ace tied the set a final time at 8-8, but Kingsford took over from there. Cook and Maggie Strehlow each served a pair of aces, and Strehlow got hot on the outside for a couple of kills as the Flivvers ran off a 7-1 to take command of the set and force the fifth set.

“Kate Cook in set four, when we started to take that set back, it was her,” Kreider said. “She had some smart tips in the front row, a big block, and she served well. Everyone had their moments tonight. We had different players step up at different times, a total group effort.”

After trading the first two sets by identical scores with neither team leading by more than just a few points along the way, Houghton’s offense took control in the third set. The Gremlins used a 15-5 push to bust open what was a 7-7 stalemate. Markham and Maryellen Trewhella paced the attack. Markham led Houghton with 11 kills in the match to go along with two blocks, two aces and six digs, while Trewhella had 8 kills, four aces, four digs and a block.

Houghton head coach John Christianson didn’t even know if Markham would be able to hold up in the match, after pulling a muscle last week.

“She didn’t play in a week,” he said. “I didn’t even know if I’d have her, and she was incredible, as I knew she would be if she could stay healthy enough to get through it.

“It was a wild match. A lot of adrenaline and jack up kids there during those final few points. Essentially what it came down to at the end, if you look at the last bunch of rallies, is they were swinging and we weren’t. We were on defense and just trying to keep the ball off the floor and push it back. In a tight match it comes down to who puts their serves in, and we didn’t.”

Christianson credited improved serving by the Flivvers for the momentum swing in the fourth set.

“In the earlier sets we were able to pass and run our offense,” he said. “I want to compliment Kingsford. When they ratcheted up their serving, we didn’t respond like I wanted us to. They got a couple more ace, a few more free balls and it allowed them to use the diversity of their offense.”