Jets lose 3-1 in bid for 1st ever regional title 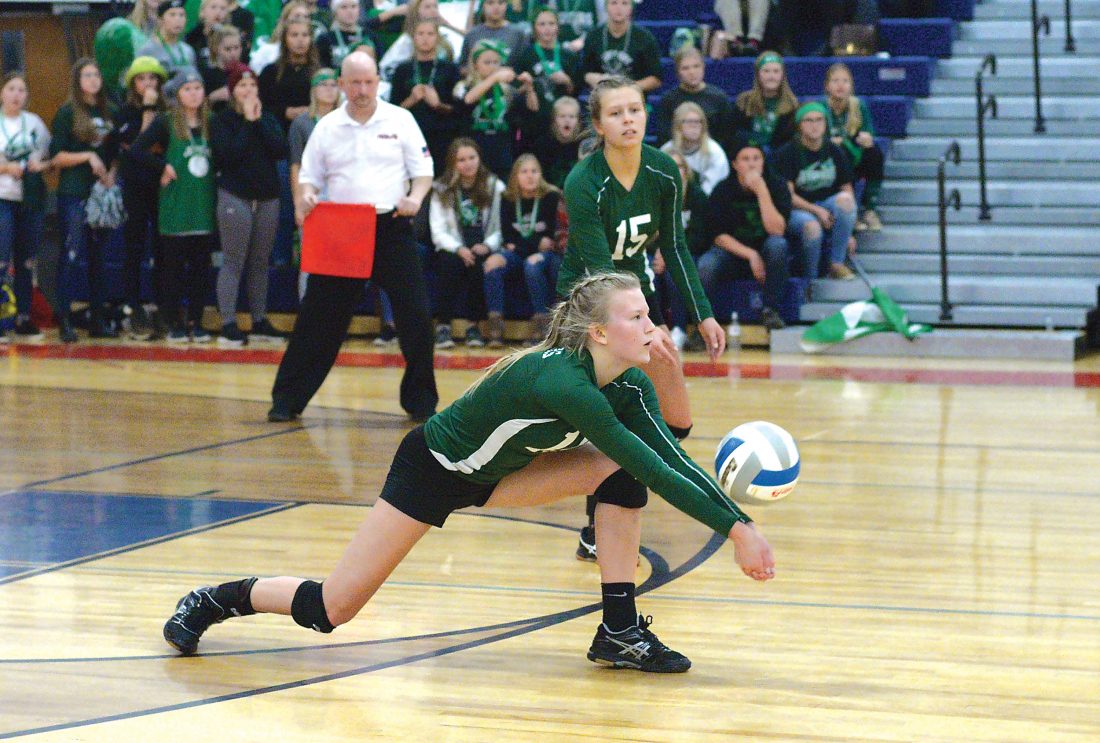 ISHPEMING — In the wild, wolves attack in a pack and use a coordinated effort to take down prey.

That’s basically what it took Thursday for the Carney-Nadeau volleyball team to win its second straight Division 4 regional title as the Wolves took down Jeffers 3-1 at Westwood High School.

The Wolves face Rudyard in the state quarterfinals Tuesday in Sault Ste. Marie.

Liana Blahnik and Taylor Kedsch combined for 35 kills offensively for the Wolves, while Hailey Ernest had 36 assists. Serving-wise, Blahnik and Sandra Boulton both had six aces, while Zoey Poupore led C-N defensively with 37 digs.

C-N head coach Steve Kedsch said his team just kept hitting the ball hard at the Jets and it gradually started to work out for his team. He also said his team’s communication improved as the match wore on.

“Once we seemed to get our passes to the target zone, Hailey did a great job getting the ball to our hitters, we just kept pounding at them and eventually, you start scoring points,” he said.

“In the first set, we were talking really well and the second and third set was a little bit of struggle with communication. In the fourth set, once we got the momentum going, it’s easier to communicate and talk when that happens.”

On the other end of the court, the Jets seemed to be in good spirits despite having their season come to an end. After all, they’d won a district title and made it all the way to the regional final in just their second year as a program. To Jeffers head coach Rachel Torp, that was a great accomplishment.

“This was a different team than I think we saw on Tuesday,” she said. “They (the Wolves) hit way more balls than they did on Tuesday. They just put them right to the floor on us. We just couldn’t return a ball and that’s where they got us.

“This is only our second season, so it’s showing to our younger girls in our school because we just started our program, that our girls can go far and we can do this. This is big motivation. I’m so proud of my girls.”

Marissa Nordstrom and Kenna Harris both had six kills for the Jets, while Brenna Hill had 19 assists and four aces.

In the first set, the Wolves went on a 7-0 run to take an 8-3 lead on three aces from Boulton and two kills from Kedsch. Jeffers fought back though and tied the set at 11-11, but with Poupore serving, C-N notched eight straight points to take a 20-12 advantage. The run was highlighted by a kill by Boulton, who had her first attempt dug up by the Jets, but then hammered down her second opportunity. The Wolves then closes out the set fairly easily at 25-15.

It took a while for the Jets’ offense to take off in the second set, but once it did, Jeffers didn’t go away. The Jets trailed C-N 12-7 at one point thanks to back-to-back aces from Kedsch, but fought back and eventually took the lead at 15-14 on an ace by Hill. C-N took control again and led 19-15 on two straight aces from Boulton, but once again, the Jets rallied to cut the lead to one at 19-18. The Wolves appeared to have the set in the bag as they held a 23-18 advantage on a tip from Kedsch, but Jeffers wouldn’t give up. They scored six points in a row to go up 24-23 on an ace from Harris and later ended the set at 27-25 with a block by Nordstrom.

The third set was another seesaw affair with Jeffers leading 12-8 on an ace by Harris, but C-N answered back later with a quick 5-0 run, including three straight aces from Blahnik, to take a 21-19 advantage. The Jets tied it up at 22-22 on two Wolves hitting errors and again at 23-23 on a C-N service error. However, the Wolves took the set 25-23 on a kill by Kedsch.