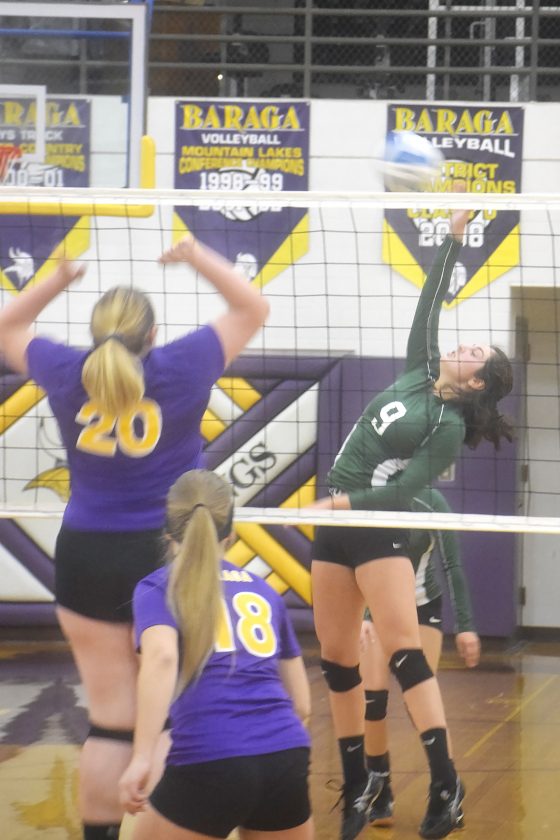 BARAGA — The Jeffers Jets moved one step closer to a MHSAA Division 4 District 98 title in volleyball as they defeated the Baraga Vikings 3-1 on Monday night.

Jeffers advances and visits Lake Linden-Hubbell at 7 p.m. Wednesday in the district semifinal. Dollar Bay visits Chassell in the other semifinal.

The Vikings led off with their best set. They commanded a two to three point lead throughout the first. Even when the Jets bounced back to tie the set at 19 and 20, the Vikings stepped it up and put together a run of four to secure the win at 25-21.

The first set was the Jets’ worst. Jeffers head coach Rachel Torp said her squad was uncharacteristically flat and out of step with poor communication. She said she wasn’t sure what was going on, but she was sure it had to stop.

“I told the girls that that was not the team that plays on my court,” she said. “We need to figure out what we needed to do and that was finding the places to put the ball. And that’s what we did in the next three sets. They listened to their coach.”

In the third set, senior Marissa Nordstrom had a run of 15 with four aces. Senior Lilly Turner followed her with a run of eight with two aces.

“Serving is what won us the game tonight,” Torp said.

In the fourth set the Jets put it all together and kept the Vikings on the defensive for most of the set. Whether it was a push, a tip or a big swings the Jets kept the Vikings guessing and did not allow them to set up any real offensive attack as they went on win 25-18.

IRONWOOD — The L’Anse Purple Hornets fell in a MHSAA Division 3 District 65 opener 3-1 to Ironwood on Monday.

Ironwood advances to play at Iron Mountain in a district semifinal on Wednesday. Hancock visits Calumet in the other semifinal.

“In the first couple of sets, it just seemed like a bit too much hesitancy, especially for a district game,” L’Anse head coach Callie Budweg said. “There were many great things happening, especially when we ran our offense. … In the grand scheme of things though, our mental errors were stronger than our play. I’ll always be confident in the power and strength and athleticism on our team, but I know there’s more room to grow.”

“Losing these seniors will be very hard and difficult to replace,” Budweg said.