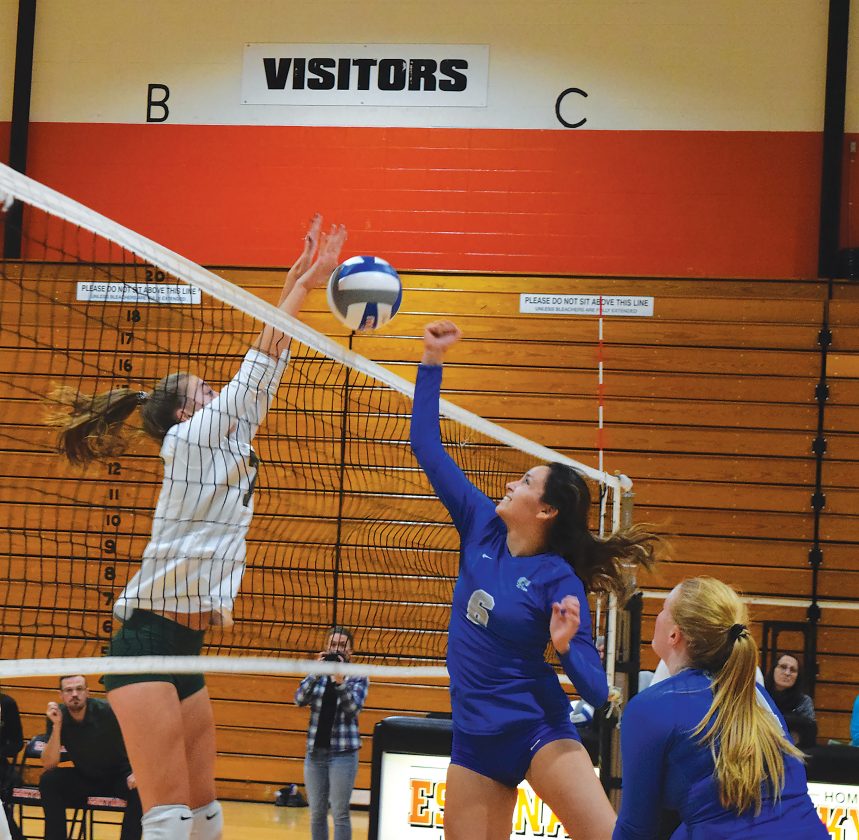 Trailing 8-6 in Set 4 with all the momentum on Calumet’s side, Manistique teammates Lenna Smith and Kayla Muth took over the match. Smith served for 16 straight points — nine of which were scored by Muth — as the Emeralds built a commanding 22-8 lead on their way to forcing a deciding fifth set.

“(It was) really our teammates pushing us to do our best,” said Smith, who finished with 27 digs, six kills, four aces and one block. “No one was down on each other. All of us were just pushing each other and we were confident in ourselves, and that really let us show what we can actually do.”

As they did all night, the Copper Kings responded with the first four points in the fifth set to regain momentum.

Out of a timeout, the Emeralds scored the next four points to tie it 4-4, but the Copper Kings went back up 10-6 on a kill by Molly Larson. After a kill by Muth, Manistique’s Madison Zellar served for the next three points and tied the score at 10 with an ace.

Calumet got possession back with a kill by Elli Djerf, but the Emeralds scored the next two points to go up 12-11 and force Calumet into a timeout.

The Copper Kings scored two of the next three points to knot the score at 13, but Manistique finished the match on a kill by Emilee McDaniel and a Copper Kings’ kill attempt that just missed hitting the back boundary line.

“We knew that Calumet was going to be tough,” Emeralds’ coach Amy Nixon said. “They’re a perennial powerhouse every year. We beat them at this point last year, too, so I feel like we had some confidence going into tonight… But we definitely knew it was going to be a battle and no lead was ever safe, as we showed in the third set. We got up, but then we let them come back and beat us.”

Manistique certainly had to work for it.

After the teams traded the first two sets, the Emeralds built an 18-11 lead in the third frame, only to watch Calumet roar all the way back to take a 23-20 lead after a six-point run by Kristi Keranen. The Copper Kings then closed it out to take all the momentum into Set 4.

“We just kind of threw that third set out the window like it never happened. We started the next one at 0-0,” said Muth, who finished with 11 kills and a game-high eight blocks. “I felt like we really kept our emotions in check on the court, and it led to success.”

Copper Kings’ coach Matt Laho wasn’t surprised his team rallied in the third set, but felt like there wasn’t enough urgency from his team in the fourth set.

“We’ve had situations like this year all year where they’ve gotten down in games, and usually they pull them out,” he said. “So I wasn’t worried, I knew we just had to take care of business. When I called timeout I just told them to do what you have to do, and just go out and play and be aggressive. If you’re going to win you have to swing and be aggressive at the net. We just had to get after it, and I think that was the difference in that third set.

“The fourth got away from us there. I think getting up 2-1 kind of got us in our comfort zone and we kind of settled in and didn’t understand the importance of winning that one and not having to go to five. Unfortunately, it went five and it didn’t go our way.”

Erin LaBar, who served for the final point, added 38 assists, 17 digs, three blocks and one kill. McDaniel chipped in with 12 kills, six blocks, two aces and one dig.