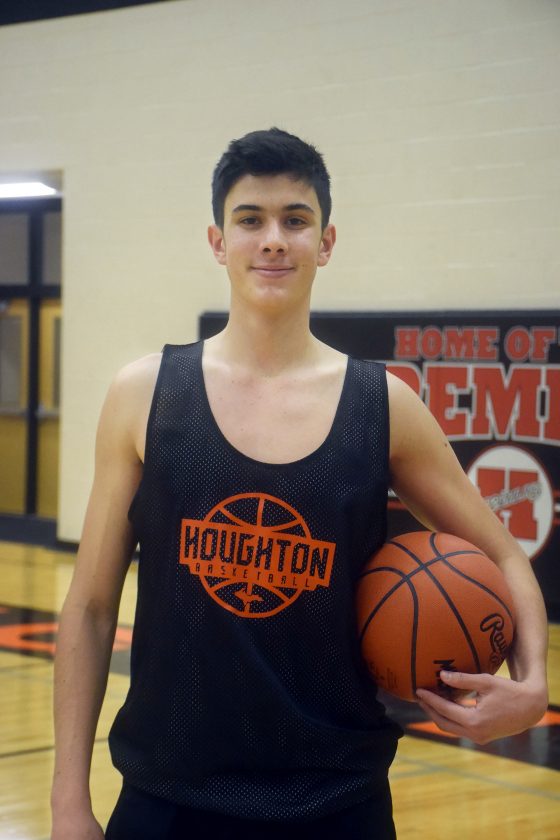 The 16-year-old is acing his classes at Houghton High School and has a starting role on the Gremlins varsity basketball team.

The only thing that has him worried is the cold and the snow and it’s only the first week of December.

“I’ve never seen so much snow,” he said with a smile. “In my hometown of Pamplona, Spain, it snows maybe once a year and it’s gone the next day.”

Salgado is an exchange student who is completing his third year of high school at Houghton while staying with a local host family. He said that he got the idea of coming to the United States for studies from his older brother who did a year of high school several years ago in Virginia.

“I did not get to choose where I came to study,” he said. “The program I enrolled in did that. I just happened to end up in Houghton.”

What he has gotten to choose is to play the game that he loves-basketball. Basketball runs in his family and is a game he’s played since he was a youngster.

“The game here is very different than in Spain,” he said. “Practices are longer, and the game here is much more competitive and intense. The offense and defensive style is more intense. I am not the best player on the team here like I was in Spain, but I like the competition; it is making me a better player.”

Houghton’s head coach Jared Lawson is quite pleased to have Salgado on the team. At 6-foot-3 with an ability to move the ball, Lawson said he’s a welcome addition to the Gremlins lineup.

“Pablo is the type of player that sees the floor and anticipates things before they happen,” Lawson said. “He gives our team another player that we can run some of our offense through. We all trust him as coaches and teammates and it is going to be a fun year of getting everyone better everyday.”

As the Gremlins open up the regular season this week, Salgado said he is ready to go.

“I think we will do okay,” he said. “There is a good team chemistry and I am ready to compete.”