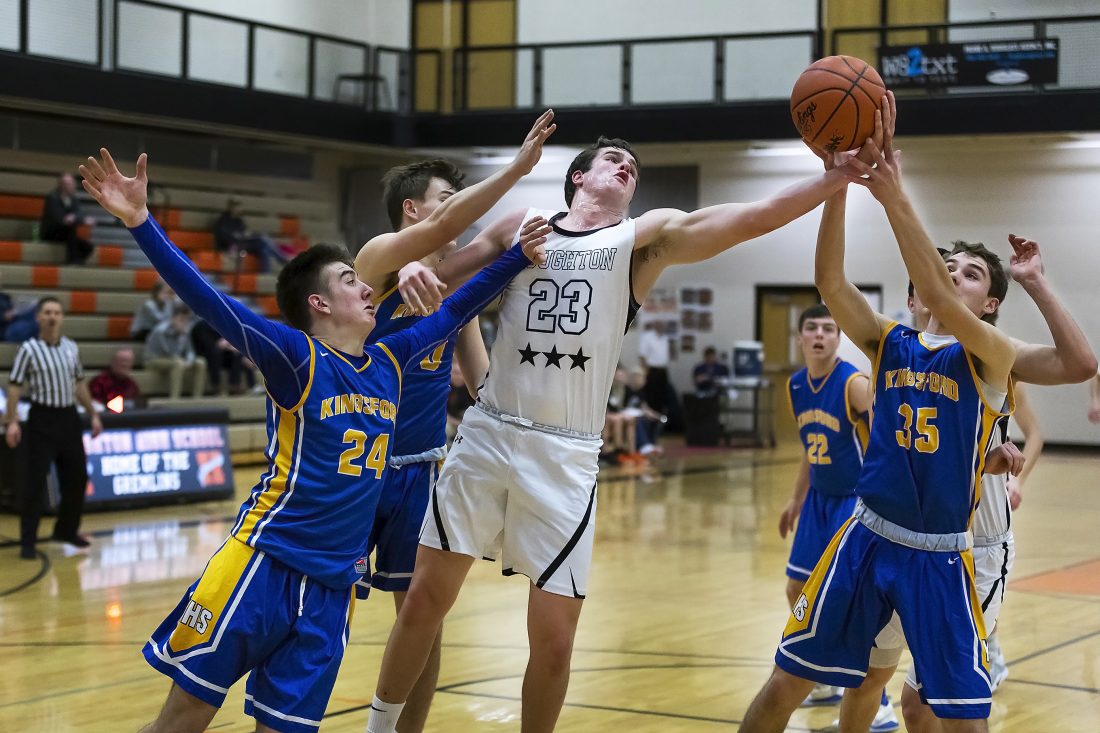 HOUGHTON — Like a man on a treadmill, the Houghton Gremlins kept trying to catch up to the Kingsford Flivvers on Monday night.

But the Gremlins fell just short in the boys basketball contest, dropping a 61-57 decision.

“We came out tonight and weren’t quite up to our game,” Houghton head coach Jared Lawson said. “Too many turnovers, too many missed chances.Those things just add up.”

Down by 12 points with just over three minutes left, the Gremlins (staged a stirring rally and were within three points with 10 seconds to play.

Houghton ace Brad Simonsen recovered a loose ball and let loose a three-pointer from the side that fell short (a bump in the elbow by a KHS defender) appeared to alter its course).

Lawson said the play was unfortunate.

“But the truth of it is that we should never have been in that spot, but it’s basketball and things do happen,” he said.

“We’re a young team and we made some errors at the end,” he said. “But it’s a big win for our program and we’re going to take it.”

Houghton’s offense was again led by Simonsen and foreign exchange student Pablo Salgado, who combined for 48 points and 23 rebounds.

Simonsen added 22 points and 12 boards, despite having an off night.

“Those two big guys for them (Gremlins) are very good,” Olkkonen said. “We did a good job on them overall.”

Kingsford’s pressing defense appeared to throw off the tempo of the Gremlins.

“I don’t feel their press caused that many turnovers,” Lawson said. “What it did was unsettle us on offense …. and we never could get into a good flow.”

After grabbing an early 14-7 lead, Houghton was then outscored by an 11-0 margin by Kingsford for a 19-14 reading after one quarter.

The play of freshman Nick Nora and sophomore Brady Kopp at both ends of the court led to a 32-27 halftime lead for KHS.

The deficit swelled to as many as 16 points in the third quarter as Chris Carollo netted a pair of triples. Kingsford settled for 46-35 lead at quarter’s end.

Simonsen and Delgado each tallied nine points in the final quarter to make it close.

Delgado led the 3-2 HHS cagers with 26 points, showing some nifty inside moves.

“It’s a real tough stretch of games,” Lawson said. “Were going to be tested for sure.”