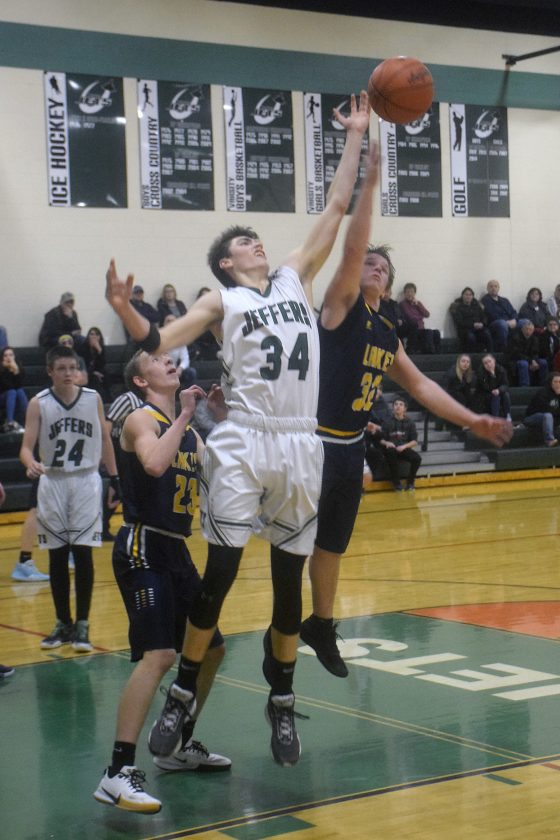 PAINESDALE — Monday night’s contest between the Jeffers Jets and the Lake Linden-Hubbell Lakes was the tale of two games.

The Lakes (5-3) won the first two quarters as they outscored the Jets 40-26. However, the Jets came roaring back and outscored the Lakes 55-31 in the second half and overtime for an 81-71 victory.

“At halftime I told the guys we needed to play better defense,” said Jets head coach Trent Keteri. “But it wasn’t just me talking in the locker room. It was Andrew Kinnunen, our sophomore, firing the guys up to play hard as well. And things seemed to come together for us in the second.”

Keteri also stressed the importance of having their big guy, Christian Hocking, get his hands on the ball more after halftime. His team heeded the call as the 6-foot-4 junior poured in nine points in the third and fourth periods along with seven in the four-minute overtime. Those 17 points in the second half came after just two in the first half.

Not only was Hocking blessed with the hot hand but so was Jets sophomore Isaiah Frahm who poured in 10 of his 13 total points in the third.

Another key as the game progressed was the fact that the Jets were able to shut down the Lakes very potent fast break offense. With that, the Lakes found themselves fishing for shots on their perimeter without much success. William Lyons led the Lakes with 32 points and Caleb Gregorie had 20 but the majority of those came in the second period.

“We are a senior-heavy team,” said Lakes head coach Jack Kumpula. “But we didn’t play like seniors. The right kids did not get the ball in their hands.”

The Jets had a 53-50 lead going into the final eight minutes. The Lakes tied it at 53 on a basket and a free throw from Lyons. It was even again at 60. The Lakes then went 62-67 but that came to and end as Austin Kinnunen hit a jumper and Hocking found net on a three-pointer to tie it at 67.

As the game spilled into overtime, it belonged to the Jets. Hocking came out and posted five points. The Lakes were then tagged for back-to-back technical fouls for unsportsmanlike conduct and the Jets Johnny Schutz sunk 3 of 4 to put the game out of reach for the Lakes. Schutz was 7 of 8 from the free-throw line.

“I am super proud of these guys,” Keteri said. “They played hard.”