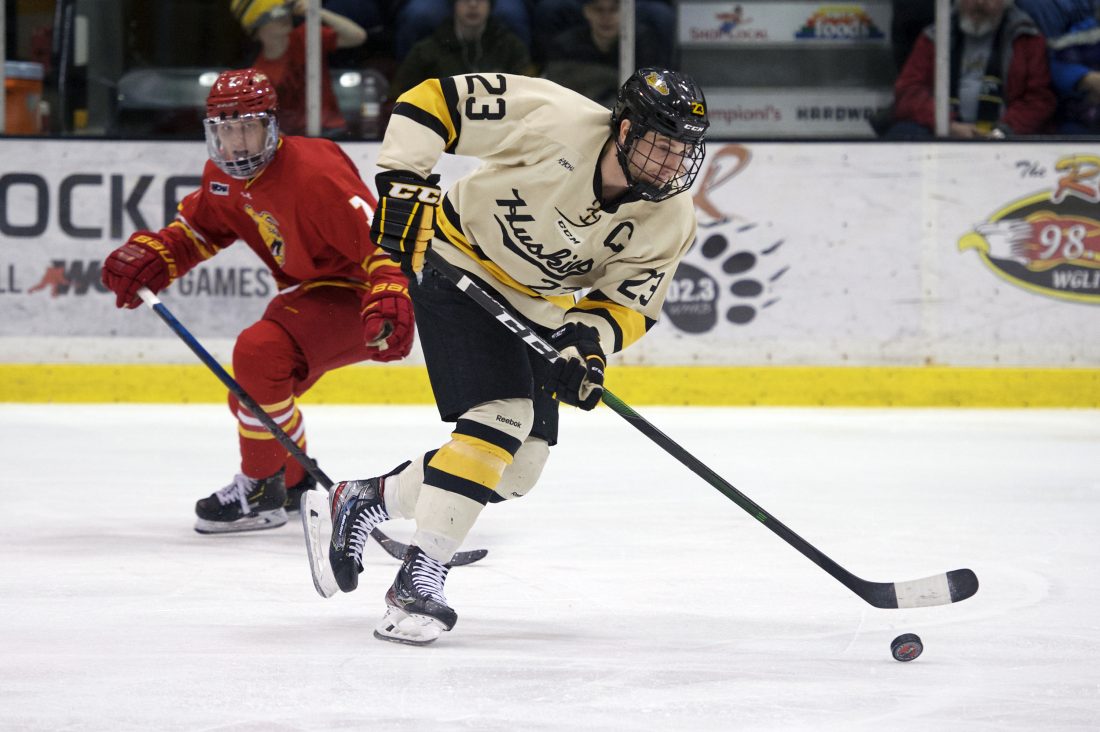 HOUGHTON — Michigan Tech won its first home game of the decade on Friday, a 2-1 win over Ferris State.

The win was also the 50th win for Joe Shawhan as head coach of the Huskies.

And it wasn’t a perfect night for the Huskies, whose intensity somewhat flattened after taking a 2-0 lead in the second period, a microcosm of Tech’s season to this point after finishing the first half of the season on a hot streak. Tech was neither dominant nor dominated, as Tech had more quality scoring chances but was outshot 31-30. Nevertheless, Friday was a step in the right direction, Shawhan said.

“It’s huge as long as we take it and grow from it, continue to grow,” he said. “You can’t just hang on. I just think we should be playing better. We’re capable of playing a better solid brand of hockey that played very well.

“I thought we played very well through the first and actually until we built the 2-0 lead. Then I thought we kind of showed our makeup of our group. We backed up. We changed our game. A lot of the things that we focused on — a lot of the prep that we did that gave us success — we got away from. We gotta find a way to be consistent, be able to stay focused, gain mental maturity as a group.”

Shawhan said his young Huskies are still learning to manage the ups and downs of a game and the regular season.

“Once we took the 2-0 lead, we had a lot of mistakes and a lot of unforced, sloppy mistakes. We have a tendency to take our foot off the gas,” Shawhan said. “It just seems like we have a lot of guys that are like ‘I wanna be the guy to make it 3-0.’ Very similar to after the GLI. We played very good, very good team structure at the GLI. Then we take our foot off the gas and we’re inconsistent for the next four games, five games or whatever.”

“I would’ve said yes had this occurred a month ago,” Ferris State head coach Bob Daniels said. “We’ve had a few games where they’ve got away from us, but for the most part this has kind of been it. I can’t say we’re beyond the constructive loss phase. We’re disappointed. I’m happy with the play — it sounds like a broken record from our end. But we’ve got to find ways to win games now.”

Brice gave Tech the lead with his fourth goal of the season. Brian Halonen tipped the puck up to Brice at the blue line. Brice skated in with speed and released a snap shot as he was falling forward that beat Roni Salmenkangas stick side just a minute and a half into the second period.

“I came off the bench and Brian made a great pass forward there and I was falling down and happened to get the puck on net and luckily that went in,” Brice said.

Of the four goals Brice has this season, three of them have been go-ahead goals.

Tech defenseman Seamus Donohue got the puck at the blue line near Tech’s bench four minutes later and threw an innocent wrist shot on goal that beat Salmenkangas on the short side for his third goal of the season. The shot came as a Tech and Ferris player crossed in front of Salmenkangas, and the puck tipped off the Bulldogs defender and into the net. Parker Saretsky and Logan Ganie assisted the goal.

“Bad angle, non-critical, non-scoring chance shot that their guy deflected,” Shawhan said. “I actually think it was going wide and he kind of pulled it back in and it went in the net.”

Ferris State’s Marshall Moise answered nine minutes later off a Tech turnover. Jason Tackett passed it over to Moise, who skated the puck in on goal from the corner and across the crease to beat MTU goalie Matt Jurusik on the far side for his ninth of the season.

“Just didn’t track it well. He tried to go far side and he ended up going far side. I just couldn’t stop it,” Jurusik said. “It’s an awkward angle. You don’t know to go into your post or play it on your feet. Just gotta work on it, drilling in practice and make the save next time it comes my way.”

Tech enjoyed offensive zone time most of the night.

Tech’s first line of Trenton Bliss, Logan Pietila and Tommy Parrottino buzzed with the forecheck, which created some zone time as Justin Misiak, Alex Smith and Brian Halonen came on and had some more pressure on Ferris State goalie Roni Salmenkangas.

Ferris State forward Jake Transit nearly scored three and a half minutes into the game when he was wide open at the face-off dot to the right of Jurusik. Tech’s defense sucked up to the puck on the opposite half wall. Ferris State gained possession and a pass found Transit, who skated in on Jurusik and tried a between the legs shot that Jurusik fought off for the save.

Daniels, the Bulldogs’ head coach since the 1992-93 season, said this year’s team has handled losses much more positively than any team he’s coached.

“You know what, this is the oddest team I’ve ever been with, in that they are in a great frame of mind,” Daniels said. “If anything, there’s been some Mondays when I go to the rink and think this is going to be a tough day. The guys show up, they work hard, they’re in very good spirits. I’ve never been around a team that’s struggling to win that has kept their heads up so well. It’s really, I feel, a credit to our leadership. I mean it, if anything, there’s times they’re picking our coaching staff up. They just keep working. We feel obligated to make sure we keep working for them too.”

With Tech having troubles playing consistently across games and series, Shawhan said the team is still molding its over-arching philosophy from which to derive its identity.

“I still firmly believe the talent is in the room, the ability is in the room,” Shawhan said. “Again, the competitive greatness, can we develop that within our team? That ability to be your best when your best is needed. The ability to step up and be your best and not make those mistakes and shut it down and do what needs to be done in order to have the success you want to have. That’s what we’re trying to help with and that’s a long process.”

Ferris State averaged about 20 penalty minutes a game early in the season. On Friday, the Bulldogs had no penalties, and the Huskies had just four penalty minutes themselves.

“It’s been a yearlong obsession of mine to get the team to play more disciplined,” Daniels said. “I’m really happy when we come out of games with eight or less penalty minutes.”

“I did think one of the areas where Michigan Tech was really good tonight was through the neutral zone,” he said. “They really come through the neutral zone. They make some really good plays. I thought they did a great job of attacking the middle of the ice. They had us back on our heels for quite some time. It’s a thing I’m going to want to watch the tape to see if we can’t come up with a solution to it. But you tip your cap and say ‘hey, my God, They got us back on our heels on this.'”

The Huskies host the Bulldogs at 6:07 p.m. Saturday.