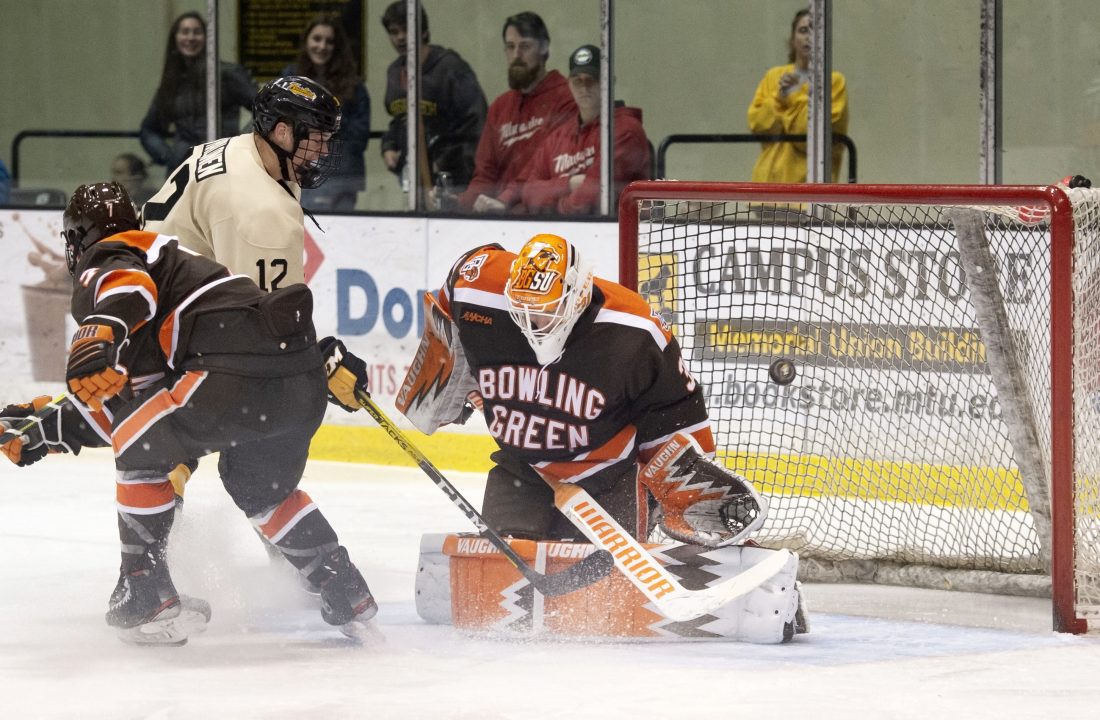 HOUGHTON — It wasn’t a perfect weekend for No. 17 Michigan Tech, closing out the weekend with a 2-2 tie against No. 16 Bowling Green on Saturday.

While the game goes into the books as a tie, Bowling Green’s Max Johnson scored during the five-minute 3-on-3 overtime for the extra WCHA point.

The Falcons (13-9-2, 8-6-2-2 WCHA) held on for a 3-2 win Friday and switched positions with Michigan Tech in WCHA standings. Tech entered the weekend tied for fourth with Alaska while Bowling Green was sixth. Now, the Huskies (25 points) are in sixth with Bowling Green (28) in fourth.

“I think you reflect and then you move on. That’s sports,” Michigan Tech assistant coach Dallas Steward said. “You gotta review the video and go through the weekend where we didn’t do well, certain things we did well and try to pick up where we left off, get some rest and regroup with a great week of practice before we head to Bemidji.”

The Falcons arrived to Houghton with a four-game losing streak and left with a two-game unbeaten streak.

“We exorcised a couple demons this weekend. (Friday) night we were able to close out a game when the other team pulled their goalie and we did a nice job with that,” Eigner said. “(Saturday) we battled back in a game and went to overtime and played well in the overtime. Then we get to 3-on-3 and take advantage of that. Really happy with five out of six coming up here and it’s difficult to get points in this league.”

The Huskies (13-10-2, 8-7-1) stumbled with their breakout all night Saturday, allowing the Falcons valuable zone time. While Bowling Green didn’t rack up its own high-quality scoring chances, keeping the puck in Tech’s defensive zone meant simply that the Huskies surging offense had even fewer opportunities to create some of the magic they’ve showcased.

“We struggled. We knew they were going to pinch. We know their system,” Steward said. “Our guys had to have poise with the puck knowing what they’re doing versus what we’re doing. Sometimes there’s a bypass situation, sometimes there’s a touch pass to a center underneath or a weakside D. We tended to fumble pucks and it would come back down our throat. It didn’t always come back to haunt us, but it could’ve. I think it’s something we’ve definitely got to improve on.”

Bowling Green head coach Ty Eigner said the forecheck Saturday was an extra emphasis after it was effective Friday.

“Michigan Tech did a better job (Saturday) of getting pucks and if they didn’t have a real 100 percent open pass, they got it out,” Eigner said. “It kind of took away from us being able to generate some momentum, but there were times we had some extended shift time. We talked about that, because the first period for Michigan Tech on Friday night was probably difficult on some of those defensemen, because we spent so much time in there. We wanted to do that again knowing they were probably a litlte tired from Friday night.”

But what magic the Huskies did get to show was enough to prevent a weekend sweep. Tech overcame some breakout struggles and used its own forecheck to sustain some zone time, putting 10 shots on goal in the second period.

With a 1-0 deficit halfway through the second, Raymond Brice took a cross-ice pass from Alex Smith on a 2-on-1 and deked to his backhand, cutting towards the right post on Falcons goalie Eric Dop. Brice shifted his weight, cutting to his left, pulling the puck to his forehand to get a wide open shot for his third goal of the season as Dop was left splayed out on his stomach.

“That was a great play by Smitty, just to wait, great patience on the blue line there,” Brice said of Smith. “Held the defender and made a nice pass over to me and put it in the net.”

The Huskies took their first lead of the weekend three minutes into the third when Brian Halonen powered past a Falcons defender. Dop went down and extended his stick for a poke check, but Halonen toe-dragged and lifted a shot under the crossbar for his ninth goal. Tyler Rockwell and Matt Jurusik each got their third assists.

“Obviously Brian made a beautiful move on their defenseman to get behind him, stayed on his feet and he kind of has that power forward ability,” Steward said. “He’s learning to play that way to be the pro kind of player he needs to be. It’s not just skill but also using that frame and that skating and that power with his shot.”

Bowling Green broke the scoreless tie three and a half minutes into the game. Cameron Wright got his 14th goal of the year with Alec Rauhauser’s 18th assist.

After Halonen gave the Huskies the lead, Bowling Green pressed on. Five minutes later, Taylor Schneider tied it for the Falcons, with assists from Freddy Letourneau and Sam Craggs.

“Honestly it was a fortunate bounce. We dumped the puck in and it hit the divider in the glass and bounced to the middle,” Eigner said. “After that, we made a nice play. Freddy Letourneau made a nice play. To Taylor’s credit, he had some opportunities on the power play, and opportunities in the slot earlier in the game and didn’t capitalize. Good for him to be able to do that because it was certainly a big goal for us.”

While some Tech players battle illness, Brice said the team simply has to dig deep when it’s not 100 percent.

“I thought we were OK. We weren’t bad, we weren’t our best tonight,” he said. “I think we’ve just got to find ways to win those games when we’re not at our best.”