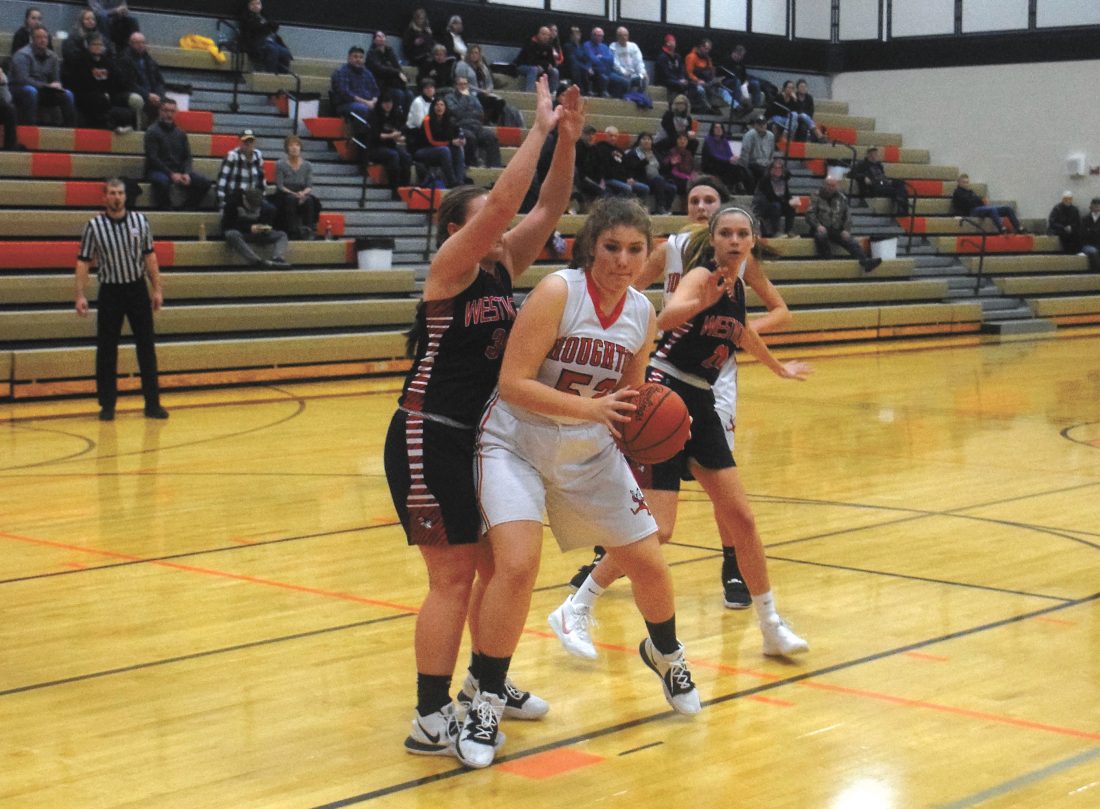 HOUGHTON — The U.P. Division 1-3 No. 2 Westwood Patriots girls proved to be a handful for the Houghton Gremlins on Friday in a 67-33 victory.

The Patriots (8-1) had an impressive five girls in double figures. According to their coach Kurt Corcoran, this was their best game yet this season.

“This was the team that I knew that I had,” Corcoran said. “They played super disciplined and were unselfish for us to have so many girls in double figures.”

The Patriots shot themselves out to an 11-5 lead in the first few minutes of the first and didn’t look back. They led 29-17 after two periods.

“This was the best we have played as a team all year long,” said Corcoran. The girls worked the ball around well-patient for a break. The break typically occurred in the form of a lay up or shot under the hoop. They made it look easy, while the Gremlins had to fight tooth and nail for the ball to find the bottom of the net.

“The girl’s movement with the ball and without was smooth,” Corcoran added. As well the girls were having fun and enjoyed playing together tonight as it should be.”

A year ago, this team from Westwood made in to the quarterfinals (final eight) in the year end tournament. Understandably, they want to go as far this year and even beyond. With that in mind, Corcoran said that the team has set some high goals for themselves and some of those were met tonight.

“They have raised the bar in terms of very specific goals game to game and even quarter to quarter,” he said. “One of the blessings of this year is that we did not lose any girls from our (quarterfinal) team last year and that obviously makes a difference. It is exciting to see.”

Senior Karlie Patron led the Patriots with 16 points. Madelyn Koski scored 15 while Tessa Leece had 13. Last but not least were Natalie Prophet with 11 points and Ellie Miller poured in 10.

Despite the loss, Houghton’s head coach Julie Filpus said that these type of games are good for her team as players go up against the things a top-tier basketball team does.

“Westwood has a lot of talent on the floor,” she said. “They’re smooth and they have a plan of what they are going to do with the ball each time down the floor with the ball. Our girls got a little taste of what top-level basketball looks like.”

Filpus added that she is rarely disappointed with the effort her girls put in on the floor each night despite being down 15 or more points.

“The girls play hard and they are scrappy till the end,” she said.

Up next for the Gremlins, are the Calumet Copper Kings whom they will playon the road on Tuesday, Jan 21.

Besonen accomplished the feat by knocking down her first shot of the game. She finished the night with 16 points.

“They’re a veteran team and they just had a little more,” Ontonagon head coach Tim Rotheaux said. “I saw a lot of good things.”

“She didn’t turn the ball over, got it down the court and that’s what we needed,” Rotheaux said.

The Gladiators (7-2) visit Baraga on Tuesday. The Panthers host L’Anse on Friday, Jan. 24.

CHASSELL — According to Chassell Panthers girl’s head coach, Bill Sleeman, Friday’s 56-40 win against Wakefield-Mariensco wasn’t the prettiest win but the girls got the job done in the end.

“We didn’t play a great 32 minutes tonight but played well enough in stretches to get the win,” he said. “We are making steady progress but are still trying to figure out our identity and just how good we could be.”

“Alia, Maelene, and Madison played well also and Linnea Huhta in her first varsity start played solid and pulled down seven boards.” he said. “We have lots of work to do but we seem to be moving in the right direction.”

BARAGA — The Baraga girls continued their wining ways on Friday as they put together an easy win against the Bessemer Speedgirls 71-17.

The Vikings outscored the Speedgirls 24-0 after the first quarter. The team had three girls in double figures. They included Reide Osterman who had 17 points. Jaylon Lindemann led the team with 21 and Allison Durant had 14 points.