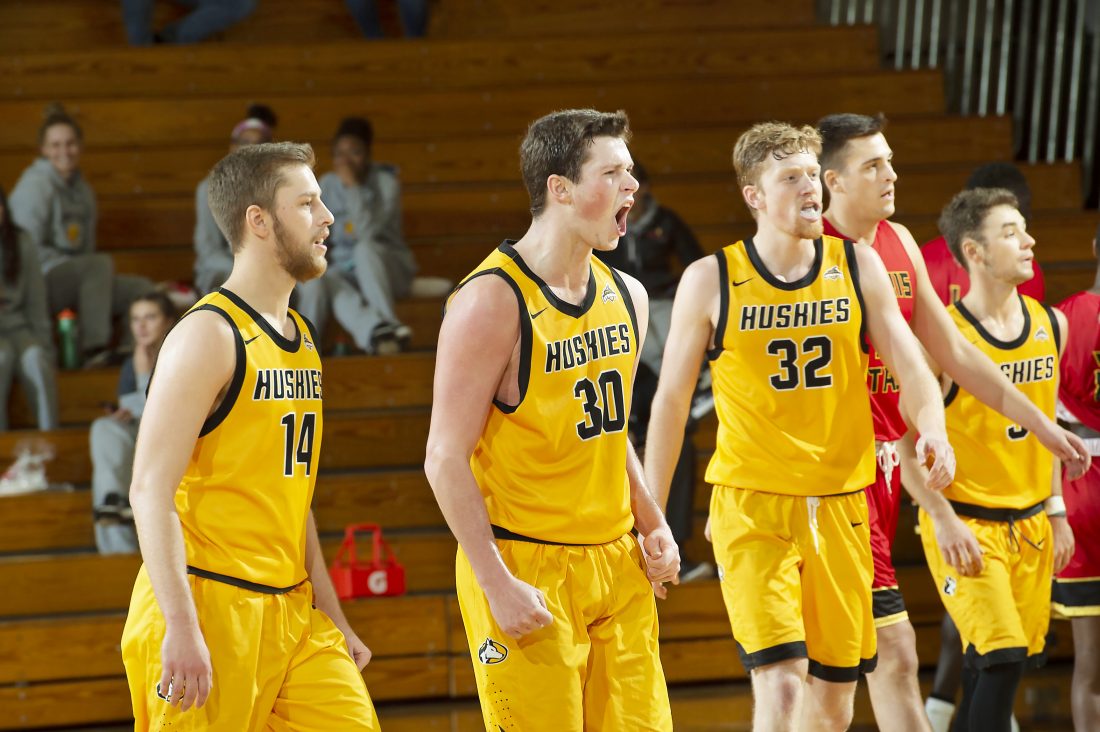 HOUGHTON — The Michigan Tech men’s basketball team played just about a perfect game on Saturday as they stunned the No. 8 Ferris State Bulldogs (18-3, 7-2 GLIAC) with a 102-90 victory at home.

Not only did the Huskies win, but the No. 8-ranked Bulldogs never led throughout the game.

“It was a good Thursday and Saturday for the Huskies,” said MTU head coach Kevin Luke. “I am very proud of our guys for the way they performed against two very good teams.”

On Thursday the Huskies defeated the Lake Superior State Lakers.

With Saturday’s win, the Huskies are now tied for first place in the GLIAC North with Ferris State.

“There is never a break in this league,” Luke said. “But we will leave here with a lot of confidence given what we accomplished this weekend.”

Huskie junior Dawson Bilski was again the opening act on Saturday as he was responsible for nine of his team’s first 11 points. All nine of them were from three-point land. He had a similar 14-point start on Thursday.

“We are doing a great job of hitting the open passes,” Monroe said. “We are playing so unselfish now.”

The Huskies recorded 22 assists on the afternoon, while the Bulldogs had 12.

We are giving up a good shot for a great shot We have a ton of guys who can shoot well and it all came together for us today.”

At half the Huskies led 54-32. Despite the gracious 22 -point lead the Huskies had established, Luke knew the game was far from over.

“I told the guys they are not going away and in my book it is 0-0,” Luke said. “We have to win this second half as well.”

Luke was right in the fact that the Bulldogs didn’t go away. They made a 16-2 run to start the second half to come within eight points at the 15:50 mark. But the Huskies countered with a run of their own and moved the lead back to 18 just before the 13-minute mark and a 68-50 lead.

From there on out the Huskies maintained momentum and the Bulldogs stayed at arm’s length.

“Coach told us to stay at our pace and play our game in those last few minutes,” Monroe said. “And we did.”

Luke said he thought the key in Saturday’s win was the way his team took on the pressure and didn’t turn the ball over.

“We handled pressure well and we did a great job of picking and choosing when we could shoot and when we should take a lay up,” he said.

“We were disciplined in our shots and we talked about that as a team,” he said. We talked about not just firing up the first available shot but rather giving yourself the opportunity to set up.”

The Huskies visit Grand Valley State and then Davenport.

ALSO: Bilski was named the GLIAC North Player of the Week after scoring a combined 50 points against the Lakers and Bulldogs. He scored a career-high 29 points against LSSU.