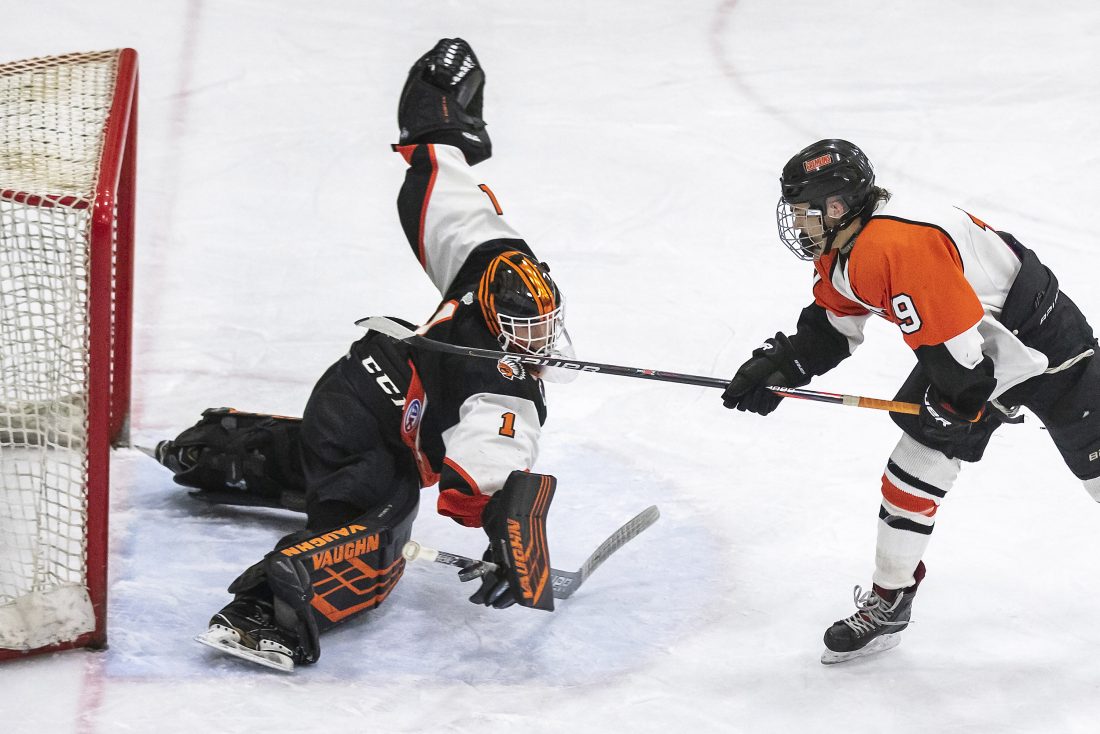 HOUGHTON — When two high-ranking opponents meet in a high school hockey game, the game should be a hard-fought one. Friday, the Division 2 No. 1 Brother Rice Warriors put their reputation on the line at Dee Stadium against the D5 No. 5 Houghton Gremlins.

Houghton led for much of the contest, but the Warriors found a way to squeeze out a 5-3 victory in the end.

“The boys showed something tonight,” said Warriors coach Kenny Chaput. “They knew what they’re up against. They (the Gremlins) were working hard and we had to exceed their energy level and we did and the third. Very good ending, for sure.”

If not for a Ryan Murphy hat trick, the Gremlins (10-7) might have held off the Warriors to earn the victory after carrying a 3-2 lead deep into the third period. After co-captain D.J. Dixon evened the game 10:35 into the third and shortly after Brother Rice killed off a penalty, Murphy scored his second and third of the night 28 seconds apart to seal the win.

For the Warriors, their top unit did what it needed to in order to help the team to their 10th win of the season. Chaput was pleased with their effort, but really praised the efforts of all four lines in wearing down the Houghton defensive corps.

“I would say our depth really helps,” he said. “I mean we played our four lines a majority of the game. We shortened it up a little bit at the end there, but that’s the advantage that you have with with depth is you can you can save your bigger guns until a little bit later, and they’re fresher. It showed today.”

The Gremlins, who needed a better effort than they gave in a 6-2 win over Negaunee on Tuesday, proved they were ready to go from the drop of the puck Friday. Head coach Corey Markham was extremely pleased with the way his team showed up to the rink ready to work.

“We had a lot of heart to heart talks, after the Negaunee game just on where we are, what state of game we’re in,” said Markham. “The boys responded. I am very happy with how we came out. I’m happy with the whole game. Our effort was tremendous tonight.”

Co-captain Ty Halonen got things started by chipping a puck off the boards in the neutral, which helped spring senior center Tucker Tapani for a breakaway. Tapani made a quick move to his forehand and beat goaltender Cooper Duncan to give the hosts the lead just 1:36 in.

Tapani struck again later in the period. The Gremlins killed off a penalty to co-captain Jiseung Choi before getting a chance on the advantage of their own. During that power play, Tapani knocked his second goal of the night home when senior center Carson Stevens’ pass found its way onto Tapani’s stick off of Rajala, and he scored from the back door at 14:18.

“He’s our top goal scorer,” Markham said of Tapani. “Those were big goals for us. We had nice plays.

Brother Rice (10-1-1 overall) stormed back with two goals a matter of 38 seconds from Ryan Murphy on a rebound, and then on another rebound from Ryan Marone to give the Warriors a 2-1 lead 5:47 into the contest.

Houghton’s response to the second Warriors tally was better than their first, and they nearly evened things the following shift as senior winger Brandon Norkol attempted to feed junior center Nathan Erva as he crashed the net. However, Erva’s quick shot was stopped by Duncan.

Norkol would figure into the scoring at the 8:21 mark when he pounced on a rebound off a shot from junior defenseman Dane Johnson that deflected off of assistant captain Niko Rajala and right to Norkol. Norkol’s quick shot beat Duncan back to the net.

For the Gremlins, getting scoring from their second and third lines are something they need to be competitive.

“We continued to work all night,” said Markham. “We got one full line of freshmen that went toe-to-toe with a team full of seniors and gave it everything.”

The teams played a very even second period and also a tight first 10 minutes of the third. However, as the game wore on, the Warriors continued to get more pucks to junior goaltender Jimmy Pietila than the Gremlins put on Duncan at the other end.

Despite the disparity in shots as the game closed in on the final minutes, assistant captain Niko Rajala had a golden opportunity to put the Gremlins back on top. Taking a lead pass, he skated towards Duncan looking for an opening. When nothing obvious appeared, Rajala juked to his left and attempted a backhand shot that Duncan fought off with the shaft of his goalie stick with 1:54 left in regulation.

Both teams are back in action Saturday with the Gremlins hosting Bay Port at 1 p.m. at Dee Stadium while Brother Rice travels north to face Calumet at the Colosseum at 7 p.m.