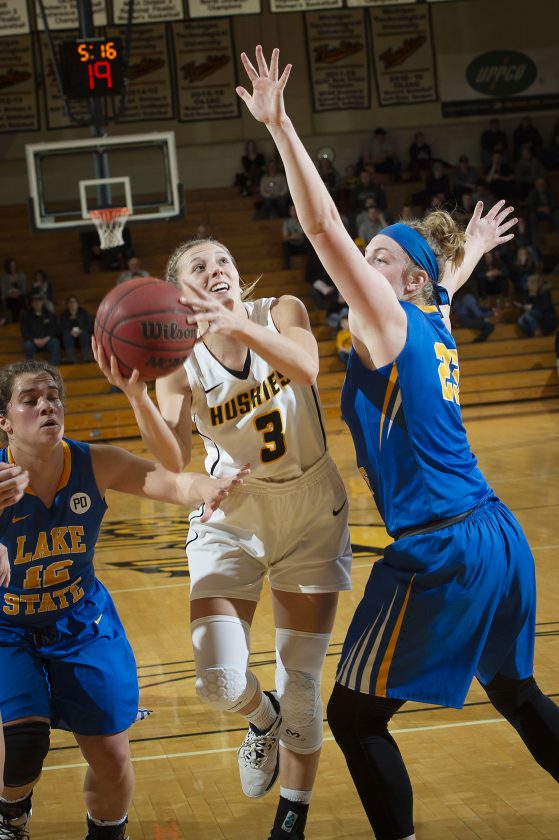 HOUGHTON — There will be nights for any basketball team when your shots aren’t dropping, and you’re a little bit off your overall game.

Such was the case for the Michigan Tech women’s basketball squad Thursday evening at the SDC Wood Gym against Lake Superior State.

But MTU coach Sam Hoyt looked to veterans Cassidy Trotter and Abbie Botz to help her team to a 62-52 GLIAC victory.

“It’s nice to have veteran leadership around like Cassidy Trotter and Abbie Botz,” Hoyt said. “And those two certainly answered the call tonight.”

Botz, an agile 6-foot senior center, was good for 14 points and an eye-opening 17 rebounds.

“We talked about that last week with our senior … to be able to step up,” Hoyt said. “I was pleased with the effort shown.”

The Lakers came into the game relaxed and looking to spill their Upper Peninsula rivals.

“There are going to be nights when your offense isn’t flowing, which was our case tonight, and you have to stay in games by defending and doing other parts of the game,” Hoyt said.

Junior Baillie McGirk, just back from an injury, helped out Trotter offensively, while Botz controlled the backboards.

“Having her (McGirk) back was a big plus for us,” Hoyt said. “It’s good to have her back.”

The locals managed a 46-35 lead after three quarters, turning aside a couple of rallies by the Lakers in the latter portion of the game.

A big triple by Hannah Hobson early in the final stanza helped keep things on course for the Huskies.

The scoring of Trotter and Botz was abetted by nine points from McGirk.

Ostman led the Lakers, 6-9 overall and 2-6 in the GLIAC, with 18 points, while Lexie Khon added 12 more. Rayman Mattison hauled down a team-leading 10 boards.