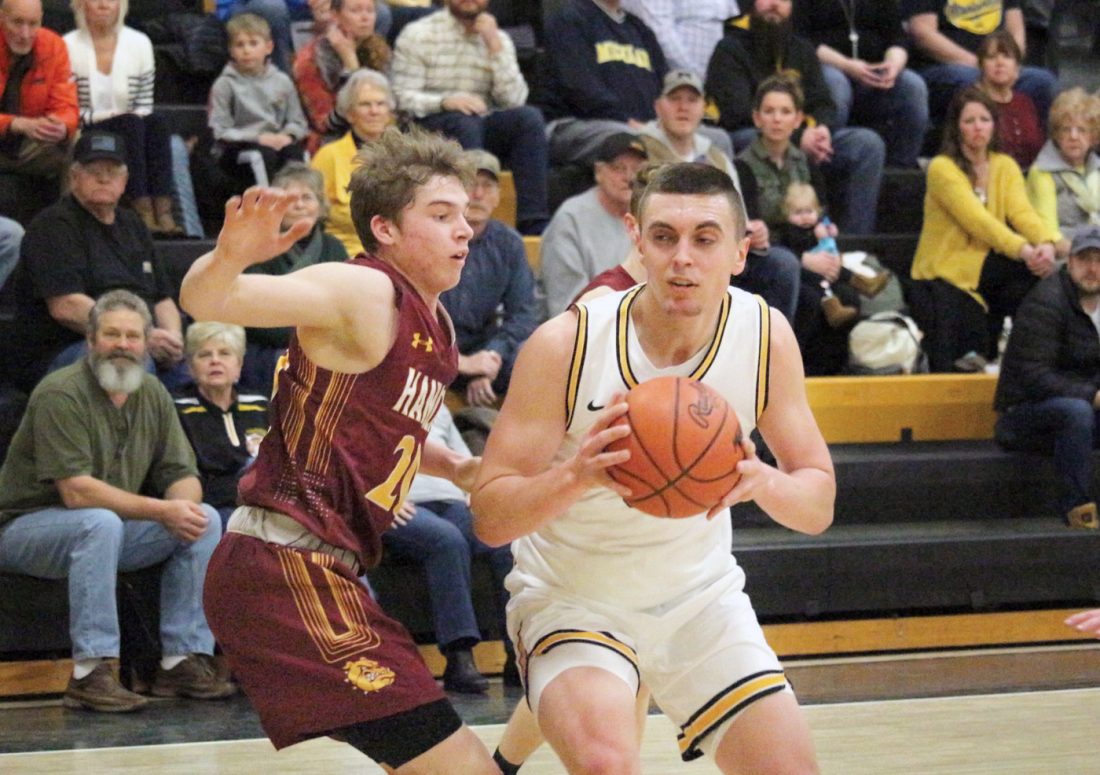 IRON MOUNTAIN — In the time it probably took for most people’s automatic headlights to shut off in the parking lot, Iron Mountain buried another U.P. basketball opponent.

Running their record to a perfect 16-0, the Mountaineers bolted to a 32-9 advantage after one quarter on their way to an 87-29 thrashing of Hancock Friday evening, in the first of five straight home games to conclude the regular season.

Foster Wonders (24 points) and Marcus Johnson (23 points) set the pace, the sharp-shooting duo combining for 34 points by halftime and exiting the contest before the final quarter. Johnson added four assists, four steals and five rebounds, while Wonders had six boards, three thefts and 19 points to Hancock’s 18 at the break.

“We got off to a good start, had a good first quarter,” Mountaineers head coach Harvey “Bucky” Johnson said. “Everybody got to play. It was a good team win for us. We want to keep it rolling at this time of year.”

With the outcome never in doubt and a running clock after the half, the Mountaineers bench cycled in and out behind Wonders and Johnson all game. It’s something coach Johnson is hoping pays dividends come tournament time.

“I think we actually have it down now,” he said. “We have for a while. These kids all bring a lot of stuff to the table with their athletiscm. They really do. Some are a little bigger, a little longer. Some are a little smaller but a little faster. So we’ve been experimenting with some things, some different matchups, so that down the road we can see where that goes with us.

“I think we have different combinations that we can use. We’ve been able to do that and the kids are doing really well with it.”

Hancock coach Matt Strong agrees the Mountaineers have the depth they need.

“They’ve got a great team obviously,” he said. “Those kids have been working on it for years and years and it shows. They have two of the best players in the U.P., probably two of the best in the state, you know, and even though they lost some key role players from last year’s team, they just reloaded with longer and taller kids.”

Freshman Vandan Jacques and junior Carson Chyuoweth each scored 10 points for Hancock. The Bulldogs (1-13) have just one senior on their roster and seven of its 11 players are underclassmen. Their lone victory was a 77-63 win over L’Anse earlier this month.

“I just told our kids that Iron Mountain is the best team you’ll ever play, probably in your life. Just go out there and compete,” Strong said. “It’s a great experience for our team.”

Friday’s contest was a varsity-only matchup, with the Bulldogs lacking sufficient numbers for a JV squad.

ONTONAGON — The Ontonagon boys basketball team added a homecoming victory to their record Friday night with a 58-55 win over Chassell.

“I was really proud of how the team played tonight,” said Gladiator head coach Brittany Turin-Jilbert. We had lost to them our second game of the season by 21 points, but it looked like a completely differnet team out there tonight.”

Logan Latvis had a strong game with 28 points as he attacked the rim off the dribble.

“I thought we were also very active on the defensive end and boxes out very well,” Turin-Jilbert said. “We had them up about 10 point with a little over three minutes to go and then went on to force multiple turnovers from our pressure.”