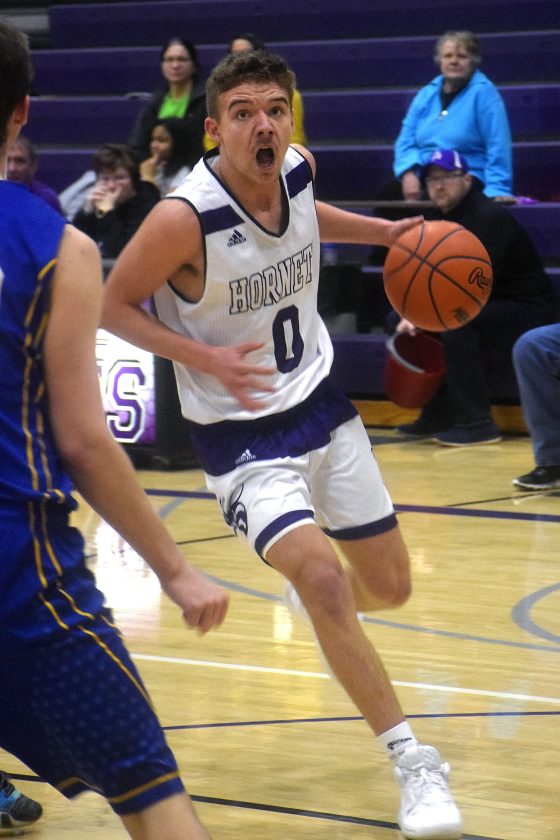 L’ANSE — After a tough loss on Friday to Hancock, the L’Anse Purple Hornets basketball team got back on the winning track Monday night with a 62-47 victory over the Watersmeet Nimrods on Monday.

The two teams came out off the opening tip off somewhat cold as they struggled to find a rhythm. They tied at seven points before the Purple Hornets closed the first eight minutes with a 16-14 lead.

Then came the second quarter where the Purple Hornets in essence won the game. They outscored the Nimrods 28-12. Particularly impressive in the first two quarters of play was the Purple Hornets junior Alex Kissel who led the team with 21 points on the night. Sixteen of those points came in the first two quarters and 12 of them where from three-point land.

“Alex shot the ball well,” Koski said. “And we had a big second quarter with him and Eli (Ostermeyer).”

Ostermeyer had 10 points on the game Eight of them came in the first 16 minutes. At

“We are a young team and we missed too many shots,” Watersmeet coach George Peterson III said. “We had too many turnovers and we were not on the winning end of those.”

Junior Julius Barajas carried the Nimrod’s offense with 26 points. The Nimrods have been without their starter Howard Caron since early January due to injury.

“He was averaging more than 20 points a game,” stated Peterson. “His absence has been tough, however, he is scheduled to come back tomorrow.”

The Nimrods will face the Fighting Knights of Phelps (Wisconsin) High School tonight at home.

The Purple Hornets will be in Ewen Trout-Creek on Thursday.