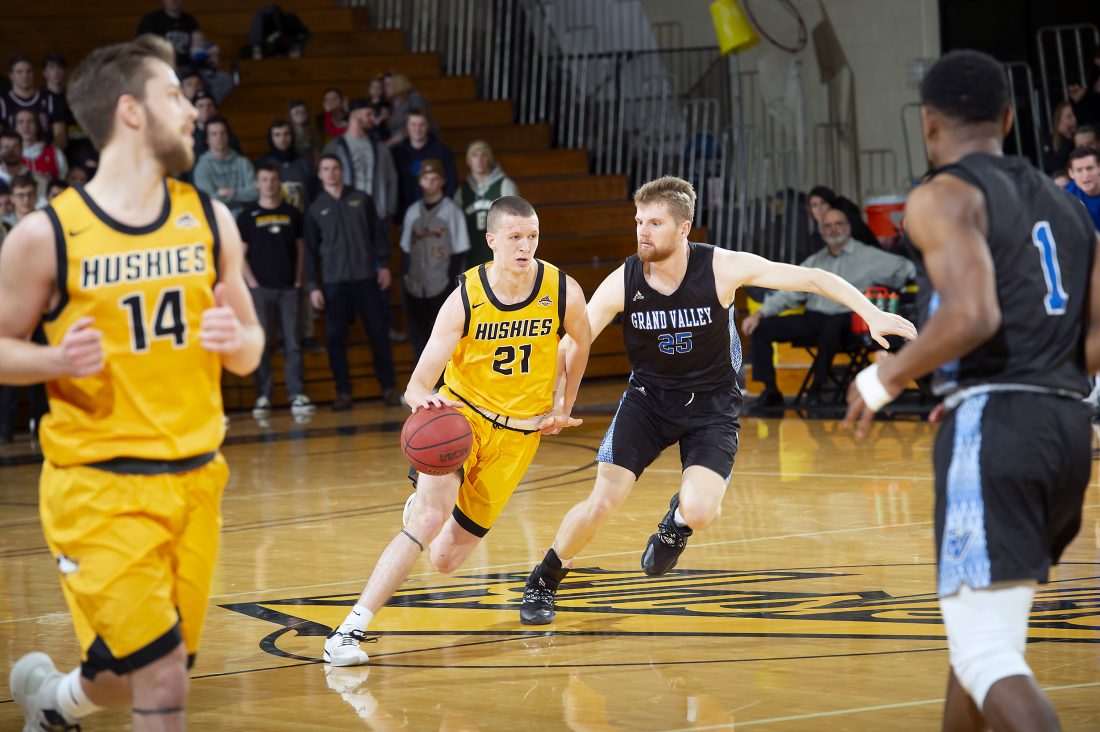 HOUGHTON — The Michigan Tech men’s basketball team closed out their home season in grand fashion Saturday afternoon with a 78-70 victory over the Grand Valley State Lakers.

With Saturday’s win, the Huskies clinched a top-three seed in the upcoming GLIAC Tournament. They will play at home the week of March 1. Before that, they have one more regular-season game against Northern Michigan in Marquette on Thursday. The Wildcats are on the bubble in terms of a spot in the postseason tournament.

“They are playing to get into the tournament and we are playing to avenge a loss to them in our own gym (in December),” Luke said of NMU. “It will be a good, tough rival GLIAC game, and we are looking forward to it.”

Tech’s win evened the series with the Lakers as the Huskies lost to them 95-93 in overtime a month ago in Grand Rapids.

Tech (19-8, 13-6 GLIAC) had a lot of help from a very full Wood Gym as they said goodbye to both the men and women seniors in between their respective games. The men’s team honored seniors Kyle Monroe, Tommy Lucca and Ryan Schuller in the brief ceremony. Monroe received special honors as he became MTU’s all-time leading scorer a week ago at Lake Superior State. He broke Larry Grimes’ record of 2,360 points which was set in 1972.

Men’s head coach Kevin Luke said that the fans enthusiasm in the stands only helped in their winning effort.

“There was a ton of energy in the SDC Gym today,” he said. “It was nice to see the community come out and support both of our teams. I’m extremely proud of our players for how they hung in there and withstood some runs by Grand Valley State. Our players executed the game plan to a tee against a very good club. Our guys played really hard and were deserving of this win.”

In the second half the Huskies would keep the lead till the end. The closest the Lakers got was four points at 42-46 in the opening minutes of the second. Tech’s Dawson Bilski widen the gap to 52-44 with back-to-back 3-pointers.

“They (Lakers) tried to step it up in the second with a lot of threes but we did a nice job of defending between the zone and man-to-man (defense),” Luke said.

Monroe appropriately finished his college career at home with a game-high 41 points and 11 rebounds. Dawson Bilski followed with 18 points.

“I thought both those guys were solid on both ends of the court and Appleby did a great job in keeping us int the game and executing our game,” Luke said. “Everybody had a hand in this win. I think credit needs to be given to our scout team who had a great practice yesterday running the Grand Valley set. They had great energy for the senior today and I really appreciate that.”