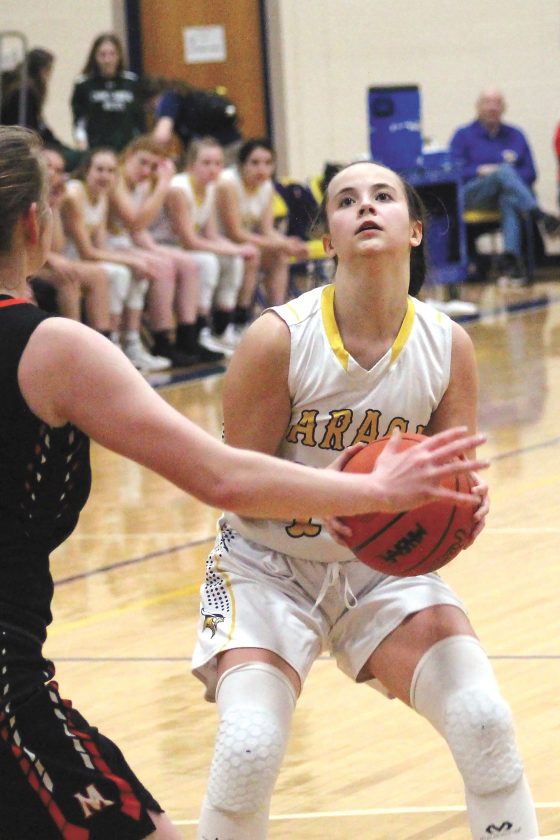 KINGSFORD — A swarming and disruptive full court press, throughout most of the game, is what Baraga used, to edge Munising 51-49 Tuesday in a MHSAA Division 4 Region 25 semifinal at the Kingsford Middle School gymnasium.

Mustangs senior Megan Matson led all scorers with 23 points, with her and her teammates attacking the basket in half court offensive sets, drawing fouls and getting to the free throwline.

Munising, who finish the season with a (8-14) record, was getting up the floor in the first quarter, and when they did, they hit their shots, holding a slight lead at the end of the quarter.

The Vikings, were led in scoring by junior Allison Durant with 13 points, with freshman Corina Jahfetson adding 11 points. In most possessions in half court sets, Baraga’s ball movement was lightning quick and passes were many.

They moved the ball around while the other four players were all moving well without the ball, turning into good looks and points. The second-chance shots Baraga had provided a lead prior to halftime, a lead the Vikings never relinquished the rest of the night.

Baraga head coach Tom Goudreau knew his team would have to rely on their pressure and quickness, with not having any height or length on their roster.

“I told the girls we had to be aggressive and pressure the ball of keeping it out of the middle of the floor,” he said. “I was hoping our pressure would create more 5 second or 10 second violations than it did, but they (Munising) did have a lot of trouble with it.”

From the beginning with Munising’s first possession, the Vikings used a fullcourt press, one that was as disruptive as it was constant, giving the Mustangs trouble moving the ball up the floor.

The turnover margin in the game was a key for Baraga only committing a dozen, with the Mustangs committing 29 turnovers, the main cause of that was the relentless pressure of the Vikings.

Baraga took as many 3-point shots in the game as they did from elsewhere on the floor, or possibly more. That’s something out of the norm for the Vikings Goudreau said.

“That’s not typical of us, we usually rely on dribble driving and penetrating, but Munising ws preventing that tonight, so our girls were pulling the trigger and hit the outside shots,” said Goudreau.

Despite being overwhelmed by the Vikings pressure all evening, and their long range shooting effectiveness, Munising was able to get the ball inside to Megan Matson, where she’s been most effective all season.

Jenna Matson added 11 points for the Mustangs, despite coming in and out of the ball game with a bum ankle that she had rewrapped twice by the athletic trainer on site. It was her third game back since missing 10 games due to breaking the same ankle.

Mustangs head coach Matt Mattson noted that injuries were a huge part of the outcome of their regular season, which they finished with a 6-13 record. “Most eight win teams don’t show up to a regional and lose a two point game to a 17 win team in the semifinal game,” said Mattson. “I am very proud of my girls and the way they didn’t quit tonight.”

“Between all the turnovers we had and the missed free throws down the stretch, it hurt us,” Mattson said. “We had our chances, we had worked hard to try to prepare for their press, but we weren’t setting our screens the way we needed to tonight. Baraga is a great defensive team and best of luck to them the rest of the way.”

Baraga used its quickness and ball handling in the second half, while on defense, its constant pressure continued for most of the half.

For a short period of time, Baraga went into a halfcourt man-to-man defense, which was what the Mustangs used for their halfcourt defense throughout most of the night. Mattson said his team tried using a zone briefly, but Baraga was too quick for it.

“In the second half, I said he need to work the ball inside more and we did, but then we got two girls with four fouls (Jaylyne Lindemann and Rylie Koskinen),” Goudreau said. “So we needed to be careful with what we did with them, up until they fouled out. That changed our offense a little, but we had a couple other girls step in and do a great job in their place.

“I always preach team first, from the five starters, to the girls on the bench who don’t get as much playing time cheering for their teammates,” Goudreau added. “Our scoring was spread out tonight, because of how unselfish our girls are. It was a great win for us tonight.”