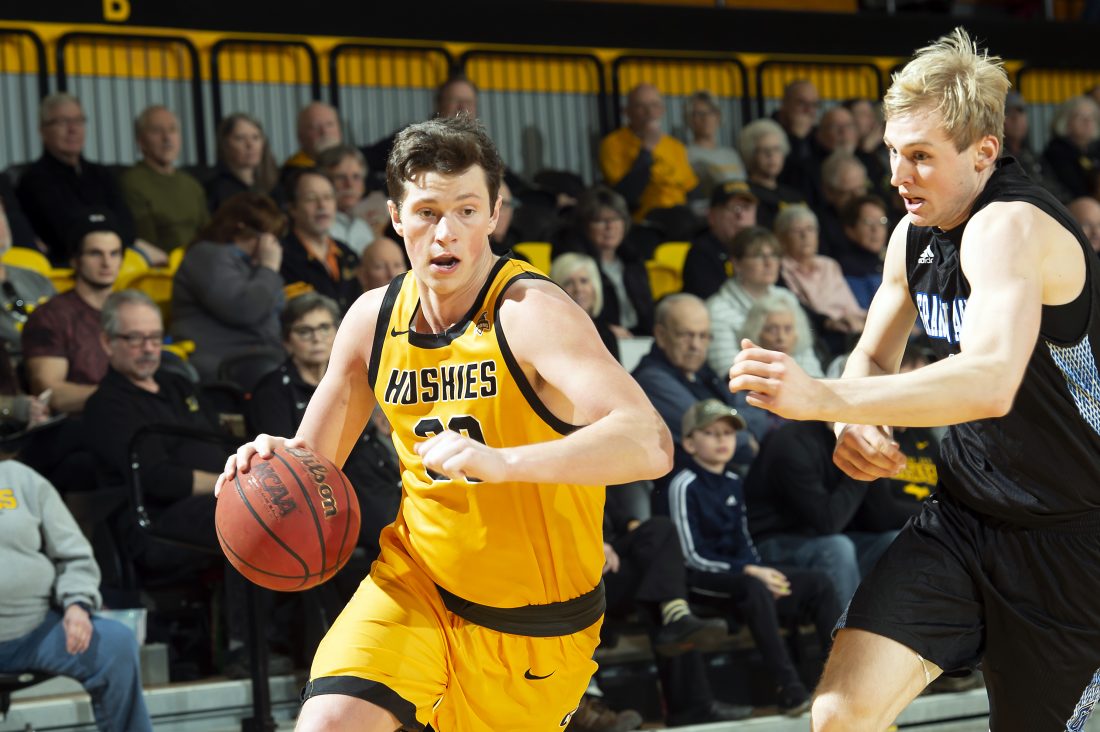 HOUGHTON — Despite an abrupt ending last week to Michigan Tech’s postseason basketball run, the name Kyle Monroe is one that will not soon be forgotten. The four-year starter etched his name in the program’s record books in a number of categories.

On the same day the season stopped due to the coronavirus pandemic, the NCAA announced Monroe was named the Division II Conference Commissioners Association Midwest Region Player of the Year. He was also selected to the First Team All-GLIAC and named the GLIAC Tournament Most Valuable Player. In addition, the 23-year-old Green Bay native was named the GLIAC Player of the Week an impressive eight times over the 2019-20 season.

All of these accolades come on the heels of setting a number of scoring records this past year. Among them was MTU’s all-time career scoring record of 2,360 set in 1972 by Larry Grimes. Monroe ended his career with 2,497 career points.

Before that, he set a single-game scoring record for Tech and the GLIAC by pouring in 53 points in a January game against Grand Valley. He ranks among the top ten in 3-pointers (67), free-throw percentage (79.2), total rebounds (205) and steals (43).

While he is certainly flattered and deserving of all those impressive awards, he said he is most proud of an honor that he shares with a bench full of other Huskies. Earlier this month, he and his teammates cut down the net as winners of the GLIAC Tournament Championship. It was the first time they had won the post-season honor since 2003.

“After I broke the scoring record, I got a call on the bus ride home from Larry Grimes,” Monroe said. “He told me that he would trade in all his individual points for team success. Now I know he wasn’t kidding. The GLIAC tournament win was probably one of the best weekends of my life. It was just so much fun and by far, my greatest accomplishment since I’ve gotten here. We put in so much time in practices over the year, and we finally got it done.”

Monroe’s success as a basketball player did not arrive suddenly over these past four years. He was a standout athlete at Ashwabenon High School in football, basketball and baseball.

He said he was one of the taller kids (6-foot-5) in his class and basketball became his passion.

“It was the sport I put the most work into,” he said.

So much so, that by the end of his senior year, he smashed his school’s boys’ basketball scoring record by more than 600 points. As well, he was a standout on his AAU travel team outside of his high school season. With such talent, he was being scouted by a number of NCAA Division I and Division II schools. However, it was Michigan Tech that took the most interest in him and eventually won him over.

“I can remember coach (Kevin) Luke and coach (Josh) Buettner coming to one of my football games and a number of my basketball games beginning my sophomore year,” Monroe said. “It was a real shot in the arm that they took so much interest in me. Michigan Tech was the perfect fit for me in terms of schooling and basketball opportunities.”

Monroe will graduate this May with a degree in mechanical engineering.

From his first day on campus and on the court at Wood Gym, Monroe knew he had found home.

“Our success over the years has come from a great chemistry we have on the court,” Monroe said. “Coach Luke and his staff know the game so well. They are incredible. They have created a team system where there are so many scoring options. We can go inside and outside- especially with the three pointer.”

While Monroe leads the team with 23 points per game, he noted there are no special shooters or particular standouts on the team.

“Everybody is a scorer to the point where coach will get mad if you are passing up open shots to try to get it to other people,” he said. “Coach knows that everyone on the team and in the game can shoot the ball. If you are open and not shooting, you are hurting our team.”

He said his bread-and-butter offensive move is a drive right, spin left, down-low shot off the glass. It’s a move he perfected in the family’s basement challenging his older brother as a youngster.

“We had a 6-foot Little-Tyke hoop and our ceiling wasn’t high enough to shoot over people so you had to be creative. I have now transferred that creativity to a 10-foot hoop,” he said with a smile.

Monroe’s prolific career almost came to an end after his junior year. In the offseason that spring, he started getting terrible head aches after workouts.

After a trip to a doctor in Green Bay, he was told he had Chiari malformation — a brain condition that stops spinal fluid from reaching the brain while doing physical activity.

“I was devastated,” he said. “I was told that I would need a brain surgery that could have been very risky and even caused other issues.”

He and his parents wisely sought other expert opinions from a number of doctors. Unfortunately, after six MRIs and visits to seven or eight more medical professionals, they all delivered a similar diagnosis. He was put on medication, but it wasn’t working.

“I was being told by doctor after doctor that I would not step on the (basketball) court again,” he said. “It was scary.”

However, in a last ditch effort by Monroe and his family, he got in at the Mayo Clinic in Rochester, Minnesota.

“It was the day before I was scheduled for surgery and this doctor asked me if he could get one more opinion,” Monroe said. “Of course I said, I don’t mind. And he came back 15 minutes later and told me I had been misdiagnosed. It wasn’t my brain that was the problem — it was my spinal cord that had a leak.”

To make a long story short, surgery was not needed and instead, Monroe was injected with a patch-like material to seal his spine in January 2019. A little more than a month later, he was cleared to hit the court again. He said he hasn’t had a headache since.

“I am so blessed and fortunate,” he said. “I am glad that this is a past chapter at this point.”

As for the road ahead, Monroe said he would like to try to play professionally perhaps overseas. However, he said it will come in time.

He, like others, was quite upset that the Huskies’ basketball post-season run came to a strange end last week. The Huskies were en route to Indianapolis to face the Bellarmine Knights in the first round of the NCAA Division II tournament when the organization shut down all NCAA competition across all sports.

“It was tragic that our season ended like it did,” Monroe said. “I thought we had a team that could make a deep run this time around. However, some things are bigger than basketball and ultimately out of our control.”

He added that he is grateful for his time at Tech and the opportunity that he has been given to play with a great group of talent.

“I will not forget the lifelong friendships I’ve been able to make with all my teammates,” he said.

He is also full of gratitude for his biggest fan club also known as mom and dad.

“I am so grateful to my parents as they are my biggest fans,” said Monroe. “They haven’t missed a home game. They are the best, and they have been the best from the start.”