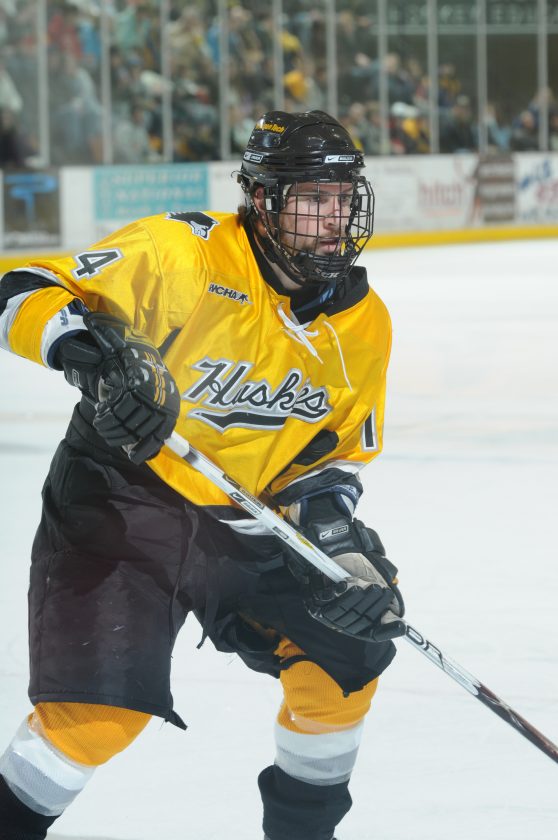 Pete Rouleau is pictured in a Michigan Tech uniform during a 2008 game against Wisconsin. (David Archambeau/For the Gazette)

HANCOCK — If ever a player was destined to play hockey at Michigan Tech University, it was Pete Rouleau.

Rouleau, who starred at Hancock High School, said he watched the Huskies from a young age.

“Whenever they (Huskies) were in town, I would be there watching with my Dad and his brother,” Rouleau said a few years ago. “Pat Mikesch was my favorite player.”

After the hard-working Rouleau put together a record-setting career at Hancock (all-state honors and a state championship as a freshman) it was time for the next step.

Rouleau weighed his options. He tried out at Northern Michigan, but the Wildcats weren’t interested. Tech offered, but the offer was off the table by the time the next season rolled around.

He ended up spending part of a season with the Green Bay Gamblers of the USHL before playing one year at Finlandia University.

A good season playing for the Lions led to Tech making another offer and he took it.

After a so-so start at MTU, Rouleau began to flourish for the Huskies. He accounted for seven goals and 23 assists as a junior and notched 12 goals and 17 assists as a senior.

“He’s a very smart hockey player,” Russell said. “He can anticipate where his teammates are going to be and makes a play. And he works very hard.”

His high school coach, the late Rick Miller, often made the same observations.

“Pete (Rouleau) has great hockey sense,” Miller said in a 2000 interview. “He was one of those players who made things happen soon as he stepped on the ice. And he made his teammates better … something you don’t often see.”

All those skills led to him setting the Lake Superior Hockey Conference career mark for goals (64) and assists (70).

His overall career total of 128 goals and 135 assists remains as one of the highest in Michigan prep hockey history.

His record for goals in the LSHC edged the one set by his father, Mike, who played for HCHS in the 1970s.

He also had the chance to play for his uncle, Dan Rouleau, who took over after Miller left the job.

There were plenty of other athletes in the family. Grandfather John “Topper” Ricci was a U.P. Sports Hall of Famer and a great fast-pitch softball player and hockey referee.

His mother, Mary Kay Ricci, was a fine basketball player at Hancock.

Pete went on to play several seasons of minor league hockey, ending up with the Port Huron Ice Hawks in 2009.

He’s also been a key member of the Portage Lake Pioneers.

He and his wife, Maren, often team up in local golf tournaments. Both were golf standouts in high school, Maren at Ontonagon High School.

Stay safe while gathering during the holiday weekend and summer events