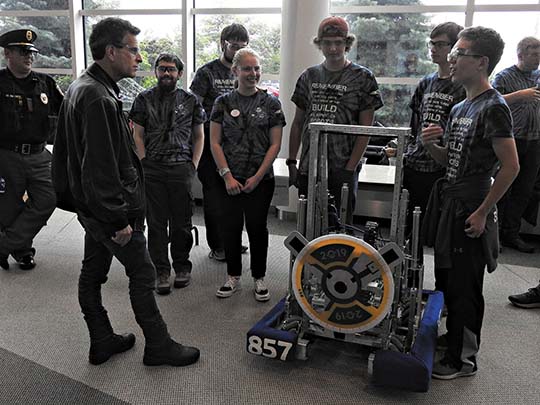 HOUGHTON — Dean Kamen is looking for his next engineers. Having already hired Michigan Technological University students, he knew where to look.

Kamen, president of DEKA Research and Development, visited Tech Thursday. He spoke to engineering students and met Upper Peninsula students participating in the FIRST Robotics program, which he co-founded.

“They’ve been great to us at FIRST, they’ve supported FIRST teams for a long time,” said Kamen, whose 440 patents include the Segway. “Now we can return the favor and start hiring some of their graduates and it’ll be a win-win. We want the kids, they want careers.”

Thursday, he gave a presentation to Tech students at the Opie Van Pelt Library, later talking to them with DEKA’s talent acquisition team. He also delivered a lecture to Tech’s first-year engineering students. 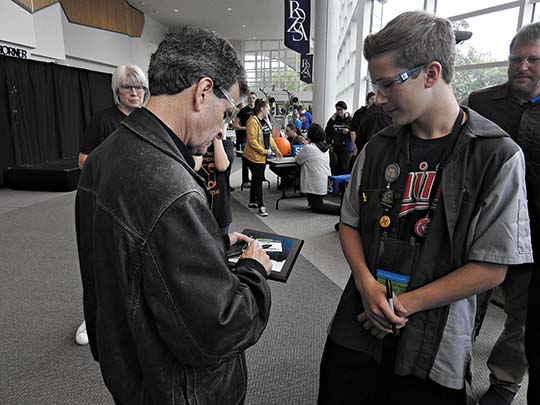 In between, he met with students from 18 U.P. middle and high school teams in the FIRST program. Striding into the Rozsa Center to the tune of “Y.M.C.A.,” Kamen spoke to students for about 20 minutes. He then met with each team, looking at their robots and posing for pictures.

“These kids, and more particularly their parents and their teachers, have devoted so much time and so much energy to being part of FIRST,” he said. “How can I not stop and take a picture? I get the better end of the deal. They work their butts off for months, I thank them and take a picture, and we all feel good.”

Jason Rogers, a member of Calumet High School’s state-winning team, got a hat autographed by Kamen. He said FIRST has changed his life. Once he graduates, he is thinking of majoring in biomedical engineering at Tech.

“Being up in the Keweenaw, it’s really secluded here, and it’s really an honor for him to come up here,” he said.

The Robogators, which featured students from three schools, did not bring a robot. But they did show Kamen pictures from their team’s outreach program.

“He said FIRST is an amazing program, and said without saying it’ll get you a long way,” said Robogators member Torrey Cookman, from Marquette Senior High School.

Kamen said meeting students recharges him when he feels overworked or stressed.

“They communicate, they cooperate, they help each other,” he said. “And you see the parents and the teachers and the professors, and you say, ‘You know what, this is what the news ought to be like. This is the future.'”