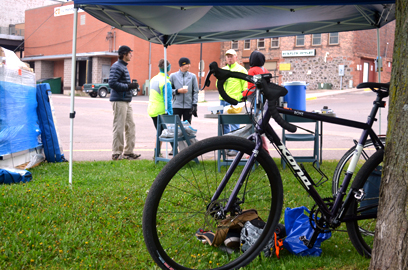 Kurt Hauglie/Daily Mining Gazette Some bicycle riders take a break during Bike To Work Day in Houghton in May 2015. The Hancock Bike and Pedestrian Committee is putting together a non-motorized transportation plan for the city, which includes developing routes in the city, which riders can use to get to work or school.

HANCOCK — For years, the various Hancock city councils have been putting a priority on making the city more bicycle and pedestrian friendly, and to accomplish that goal the Hancock Bike and Pedestrian Committee was created.

Glenn Anderson, Hancock city manager, said the city council created the committee in 2012 with the intent of creating a plan for not only recreational bicycle and pedestrian use, but also for transportation to work, school and other locations.

Anderson said years ago Houghton created a bicycle and pedestrian committee, and it sounded like it would be a good idea for Hancock.

“We felt we should at least have something similar,” he said. “That has been in our strategic plan for many years.”

The committee, which consists of Anderson representing the city, and other community members, meets every month or every other month throughout the year.

The committee is currently working on developing a non-motorized plan for the city, Anderson said. The goal is to create a route map for cycling and walking, and that will be presented to the city’s Planning Commission.

“That’s part of our Complete Streets,” he said.

Many communities in the country are developing Complete Streets plans, which involve planning for integrating motorized and non-motorized transportation in the community.

Once a final Complete Streets plan has been created, Anderson the city council will create an ordinance for it.

Anderson said the committee has been working with the Michigan Department of Transportation during the reconstruction of Quincy Street downtown, and before the recent work done on M-26 in Ripley.

“There’s a bike lane on Hancock Street because of the committee’s work with MDOT,” he said.

Anderson said MDOT will create four pedestrian bump outs on Hancock Street to make it safer for pedestrians to cross the street. The bump outs improve visibility of oncoming traffic.

Ray Sharp, director of community health promotion and education, and a member of the Bike and Pedestrian Committee, said the non-motorized transportation plan the committee is working on is intended to be a focused part of the city’s master plan, which is being developed.

The non-motorized plan will include routes for people to use to get to destinations, such as work, school and other locations.

“That implies more than a collection of facilities,” he said. “It’s more than recreation.”

The biggest barriers in the city for bicyclists and pedestrians are snow and hills, Sharp said.

So far, Sharp said there are two bike lanes created by striping in the city. One is on the north side of Hancock Street and the other is down-bound on White Street. More dedicated lanes may be created as a result of the non-motorized transportation plan.

“We are recommending for more bike lanes,” he said.

Anderson said the non-motorized transportation plan will be presented to the city’s planning commission in January or February.

The Bike & Pedestrian Committee is a valuable asset for the city, Anderson said.

“We have a very good committee dedicated to improving bike and pedestrian access,” he said.