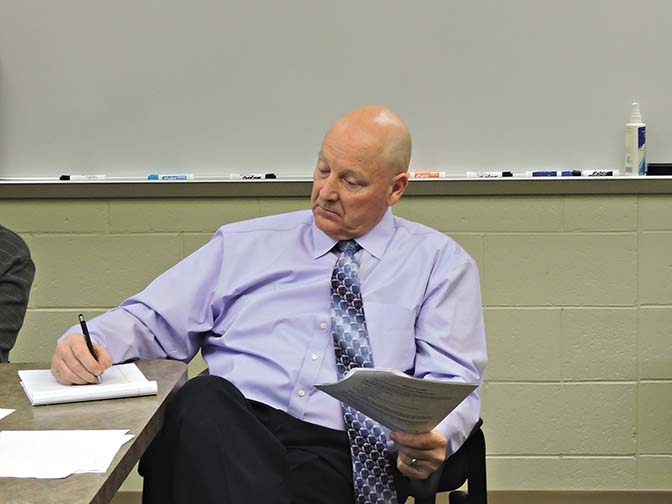 Graham Jaehnig/Daily Mining Gazette The Hancock School Board is moving forward in its search for a new superintendent to replace Kipp Beaudoin, who submitted his resignation earlier this year, when he announced he had accepted a missionary position to teach overseas. Beaudoin’s contract expires on June 30 of this year.

HANCOCK — The School Board will conduct a special meeting Tuesday, May 14, from 6-9 p.m. for the purpose of interviewing three candidates for the superintendent position to replace Kipp Beaudoin, who resigned in order to take his experience in education in a new direction overseas.

The three candidates were selected from a list of 10 applicants whose applications were reviewed during a special meeting at Noon last Friday. The three candidates for interview are Steve Patchin, currently director of career services with Michigan Technological University; Chris Salani, Hancock Middle and High School Athletic Director, and Katrina Carlson, supervisor of special education at the Copper Country Intermediate School District. Two additional “maybes” have not been named.

During the reviews at last Friday’s meeting, none of the candidates were publicly named, but five were from the local area. One was as far away as Florida, and another from Kentucky. Although Principal Ezekiel Ohan was not among the candidates to be interviewed, he told the Daily Mining Gazette Friday that he would like the school district’s households to know that he did submit his application.

The candidates were not named, said Board President Dale Kero, because it was what board decided to do.

“That’s usually somewhat standard practice,” he said, “and when we posted (the position), we also gave them the option to make it totally confidential, unless they got advanced to the interview process.”

A community committee will also be involved in the selection process, Kero said, which consists of five local people who all live in the district. One is a former teacher, one is a former board member, two are in administrative roles with extensive experience in interviewing, and one is in a professional position that represents a “good portion of the community,” he said.

The names of none of the committee members were given.