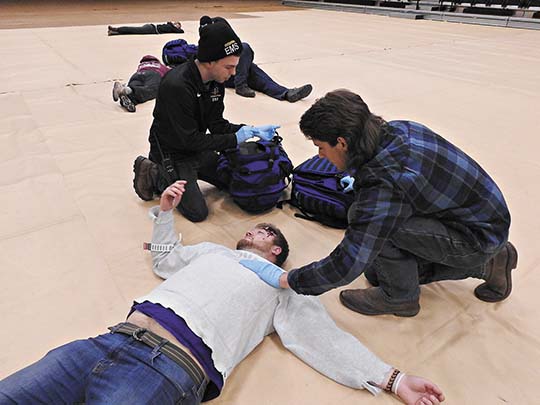 HOUGHTON — If a fuel tanker overturns in a multi-vehicle crash near Michigan Technological University, Tech employees and emergency responders will know what to do.

Because they have already done it.

Tech hosted a disaster drill on campus Thursday night, acting out a scenario where a possibly fatal crash at the intersection of U.S. 41 and MacInnes Drive caused dozens of injuries and spilled up to 2,000 gallons of fuel.

The university performs a drill every three years, each one different. Last time was an active shooter drill.

“We try to pick the scenarios that are actable,” said Jon Stone, director of Michigan Tech EMS. “You don’t want things that are totally unbelievable, but things that could happen.”

More than 50 community members volunteered for the drill. Some learned of the event through social media, including the Houghton County Flood Volunteer Facebook page set up after last June’s flood. Stone said the turnout is a sign of the same spirit.

“We had all these volunteers last year and on a rainy, snowy, day, we had 50 volunteers coming out,” he said. “I just think it shows our community appreciates what we’re trying to do and are willing to dedicate their time to it as well.”

The response last year was a good demonstration of the system Michigan Tech has put into place, Stone said.

“We know our partners,” he said. “We’re fairly good at communicating together. We know what has to get done. We can divide the labor out. I don’t think we would have had the positive outcomes of the flood without these community-wide efforts over the years to improve our capabilities.”

The 50 volunteers were spread out to different sites. Some were stationed at buildings on campus, such as the library or Rekhi Hall, where a gas smell would be detected. A Lamers bus picked them up and brought them to the Student Development Complex.

About 15 volunteers were transported to Aspirus Keweenaw Hospital, where they were decontaminated and went through treatment.

A triage area was set up at the Wood Gym, where emergency workers tended to about 30 “injured” volunteers. Some presented with respiratory problems from the fumes. Others had been hit by debris from the collision, with fake wounds to match.

Tech graduate student Bharath Lavu was decorated with contusions on his forehead and neck.

“It will keep them practiced and ready to go when there’s a real situation like this,” he said. “I hope this helps them out so they’ll be more efficient in real-world situations.”

Upstairs in the SDC, Tech administrators and employees manned desks for areas such as operations, safety and finance.

Although the drills could be done internally, Stone said Tech brings in other agencies because it values the emergency response community.

“The value that we have in our community as far as emergency response is very, very good,” he said. “And we get there because we train, we practice, we exercise and we do it again.”

Because of Thursday’s cold and snow, a portion of the outdoor exercises simulating the actual crash was postponed. Stone said it will take place sometime in June.