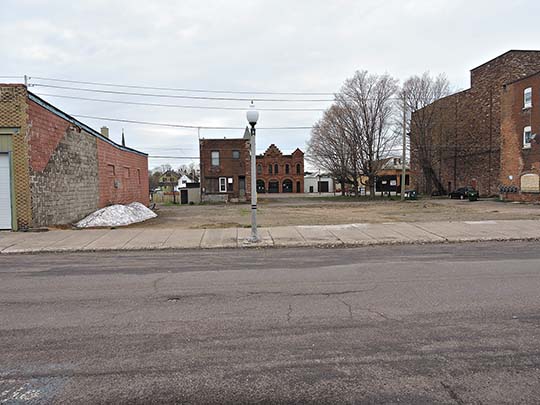 Graham Jaehnig/Daily Mining Gazette The vacant Fifth Street lot upon which Sac’s Bowling Alley once stood, will become a green space this summer, adding a location for a farmer’s market, and community events.

CALUMET — The Village Council, in moving forward with revitalization projects, met in special session Thursday to discuss obtaining topsoil for the creation of a Fifth Street green space, that could be used during the summer for a farmer’s market, and a host of various events.

The topsoil will come from the Agassiz Athletic Field project, which is receiving extensive work with funding from a school millage.

Trustee Nathan Anderson said he and Downtown Development Authority (DDA) Chairwoman Leah Polzien had been working on the plan for two days, and he calculated that up to 550 cubic yards of soil could be placed on the two lots in question.

Anderson said the contractor, Bacco Construction, who would transport the soil, agreed to do so at no cost to the village, but at that point, he did not know if the village could get the soil spread at no cost.

“But that is a DDA issue, as far as any cost to spreading the topsoil,” Anderson said, saying later during the meeting that at this point, the project would incur no cost to the village whatsoever.

Polzien told the council that the property may need to be to be graded before spreading the topsoil, saying that at the back of the lot, where it fronts the alley behind the Calumet Theatre, there is a sizable divot in the ground that would catch rainwater, which the Department of Health does not want.

“Health Department-wise, if you read the stuff they want for a farmer’s market or anything like that,” Polzien told the council, “standing water, they do not want that.”

The council voted unanimously to accept the topsoil.

After the meeting, Anderson said that creating the space is part of a greater effort to clean up and build up Calumet’s image, and improve its aesthetics.